All the charts of the major equity indexes are in near-term bullish trends -- and that should be respected.

However, the data are mixed and not really making any strong implications as to very near-term action. Meanwhile, while the market's forward valuation is still at a respectable premium to "ballpark" fair value.

As such, our song remains the same. Respect the trends while waiting for weakness as a buying opportunity. 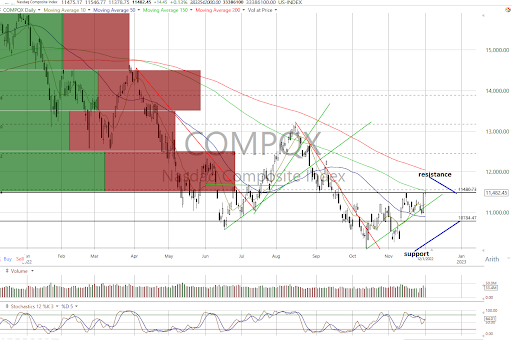 On the charts, the major equity indexes closed mixed Thursday with mostly positive internals as trading volumes dropped from the prior session.

All closed around the midpoint of their intraday ranges with the Nasdaq Composite (see above), Nasdaq 100 and Value Line Arithmetic Index posting gains as the rest gave up small portions of Wednesday's significant gains.

So, we still find all the index charts in near-term uptrends and above their 50-day moving averages while cumulative market breadth is positive and above the 50 DMA for the All Exchange, NYSE and Nasdaq as well.

Two of the McClellan Overbought/Oversold Oscillators remain in overbought territory with the Nasdaq staying neutral (All Exchange: +54.88 NYSE: +73.7 Nasdaq: +43.04).

The percentage of S&P 500 issues trading above their 50-day moving averages (contrarian indicator) remains in bearish territory at 91% and near its highest readings for the past two years.

Interestingly, the Open Insider Buy/Sell Ratio rose to 58.8, staying neutral. While only neutral, it reveals that insiders have been gradually increasing their buying activity as the markets have risen.

This week's AAII Bear/Bull Ratio (contrarian indicator) rose to 1.46, remaining bullish versus its very bullish signal prior to the rally.

Also of import was the 10-Year Treasury yield closing lower at 3.53% and below support. We believe new support is 3.45% with resistance at 3.8%.

Nothing on the charts or market breadth is casting a shadow on the near-term positive index trends. However, the data are relatively ambiguous regarding very near-term action while valuation is stretched. Thus, we remain of the opinion that trends should be respected while buying weakness.

Get an email alert each time I write an article for Real Money. Click the "+Follow" next to my byline to this article.
TAGS: Investing | Markets | Technical Analysis | Trading | Indexes | Treasury Bonds | U.S. Equity