It starts with the financial isolation of what was less than a decade ago a G-8 nation. Where does it end? Does it end? That depends on battlefield behavior. Russia, as the aggressor, in launching an unprovoked war against its neighbor, has been increasingly and just as aggressively, from an economic perspective, unwound from global participation.

Ever more severe sanctions have been placed on top of those sanctions already placed. The Russian central bank has been left nearly defenseless. A number of Russian banks have been left able to move only rubles. A number of Russian leaders, as well as the wealthiest individuals in the country have seen paper wealth evaporate in a matter of days. That nation, Russia enjoyed the eleventh largest economy in the world (nominal GDP) in 2021. Today is March 1. Two months in. Will Russia, by the end of the month, even be a top twenty economy?
How will the extraction of all things Russian from worldwide participation impact the global economy? Where is the complexity risk? What are the counterparty risks, and in what markets away from the obvious? Is there going to be a much bigger than "Lehman Brothers moment"? Guess, that's a tale that only time can tell? How much time? Spin the wheel. Probably not that much.
What we know is that at least in this case, sanctions have performed more as punishment than deterrent... and punishing, they will be.

The cracks appear in the sidewalk as the children, hopefully unaware of their own nation's bombs landing in a not too distant land, play silly games.
Russia's central bank was forced on Monday to take its core interest rate to 20% from 9.5%. Russia's largest foreign bond ($7B maturing in 2047), lost more than half of its value. Trading at Moscow's stock exchange has been suspended. That market will not open on Tuesday either.
Here in the U.S., both the NYSE and Nasdaq have had to halt trading in Russian issues. Citigroup ( C) , often perceived as the most internationally exposed of large, money-center U.S. banks, has already revealed almost $10B in Russian exposure.
BP PLC ( BP) led the charge as much of big oil has tried to quickly extract itself from Russian investment. It sounded like BP would try to divest itself of its 20% stake in Rosneft. In reality, in this environment, is it divesting, or is it something close to abandoning?
Pictures show up in mass media of long lines at banks in Russian cities as citizens try to withdraw rubles worth much less than they had been only days earlier. Russian President Vladimir Putin has tried to put a halt to the rapid disintegration of his economy, preventing Russians from transferring foreign currency abroad or from servicing loans made in foreign currencies outside of Russian borders. Hence, the population turns to cryptocurrencies such as Bitcoin to facilitate capital flight from Russia, spiking the values of said cryptos in the process.

Five days into this invasion, it has become apparent that Putin had underestimated the fight and determination of the Ukrainian armed forces and the Ukrainian people. Quite obviously, there is a will to retain independence in this country and Russian forces are seen as anything but liberators. Putin, just as obviously, appears to have overestimated support for his poorly planned operation at home and in the capabilities of a military that seems almost disinterested in playing away games.
Five days into this operation, Russia has not taken and held any single major Ukrainian city or major military objective. Despite the many reports of Ukrainian forces giving far more than they are getting on the battlefield, there are also reports of Russian vehicles running out of gas, Russian soldiers asking the locals for food, and captured Russian soldiers claiming that they had no idea that they were in Ukraine or even at war.
If true, this is a sign that enlisted personnel in the Russian military are still deprived of the use of maps as they were during the Cold War. Only a nation that fears mass desertion would deprive the common soldier the means of land navigation. On Monday, as Russian forces had apparently been forced to slow, due to both stiff resistance as well as their own logistical inefficiencies, artillery and rocket attacks appeared to be ramping to an increased level on Kharkiv, Ukraine's second largest city when fully populated. Civilian casualties are known to have mounted.
On Tuesday, as those missile attacks on Kharkiv continue, a military convoy that extends roughly 27km moves to encircle the capital city of Kyiv. There are intelligence reports that the Russian armed forces, as of Monday, had only put between 50% and 75% of their chess pieces on the board, and were moving to add assets to areas of engagement. Sanctions and an embarrassing military performance over the first five days of this invasion appear to not be enough to force a rethink of Soviet, I mean Russian intention. Despite holding peace talks on Monday at the Ukrainian/Belarusian border, the Russian army is stepping up its aggression.

After aggressively rallying off of intraday lows on Thursday into Friday, U.S. markets turned in a mixed performance on Monday. The S&P 500 gave up 3.14% in February, after surrendering 5.26% in January. The broadest of large-cap U.S. equity indexes has now painted the tape red for four of the past six months.
Gold, silver, and other precious metals, as well as cryptocurrencies have caught a safe-haven bid, rising alongside the U.S. dollar, in a sign of acute crisis-level demand likely from Eastern Europe. U.S. Treasury securities have also enjoyed this kind of support. The U.S. 10-Year Note has paid as much as 2% on Friday, as little as 1.81% by late Monday, and just 1.77% as I write this piece. Same story for the U.S. 2-Year Note as that yield moved from more than 1.62% on Friday to 1.42% overnight to just 1.36% as I type.
On the last day of February, U.S. equity markets reversed off of much lower levels going into the closing bell. The Nasdaq Composite, Nasdaq 100, Dow Jones Transportation Average and Russell 2000 all went green for the day, each up between a quarter and a half of one percent. Four of the 11 S&P sector SPDR ETFs managed to close green for the session, led by Energy ( ( XLE) ), which was up 2.47%. Obviously, U.S.-centric producers are leading that charge. Four of the 11 sector ETFs that shaded red, lost more than one percent.
Aggregate trading volume spiked on Monday from Friday, and rivaled Thursday's numbers. Reversals will do that, and in the process make price discovery and capital allocation more difficult to interpret. Losers beat winners at the NYSE by roughly 9 to 8, as advancing volume took 44.7% of the composite. Winners beat losers at the Nasdaq by the narrowest of margins, but advancing volume took a 61.2% share of aggregate Nasdaq-listed trading volume. For names constituent to the S&P 500, Monday was the heaviest day of trading since Dec. 17. For stocks constituent to the Nasdaq Composite, Monday was the second heaviest trading day of February, second to last Thursday.

For Real Money, last Thursday, I once again made the bull case for both Lockheed Martin ( LMT) and Northrop Grumman ( NOC) . Lockheed is a long-time, Sarge fave, while my relationship with Northrop has been more of a hot/cold thing, that has really heated up of late.
I was asked yesterday if I was taking profits as both had seen their share prices spike higher on Monday. In fact, the move into defense contractors has been far more broad than what we have seen for these two names. The Dow Jones U.S. Defense Index soared 5.99% on Monday, as Stocks Under $10 holding RADA Electronic Industries  ( RADA) , purveyor of vehicle mounted tactical radars, screamed 12.94% higher and another long-time Sarge name, Kratos Defense ( KTOS) , "the drone guys", popped 11.99%.
That said, back to the question that I was asked. 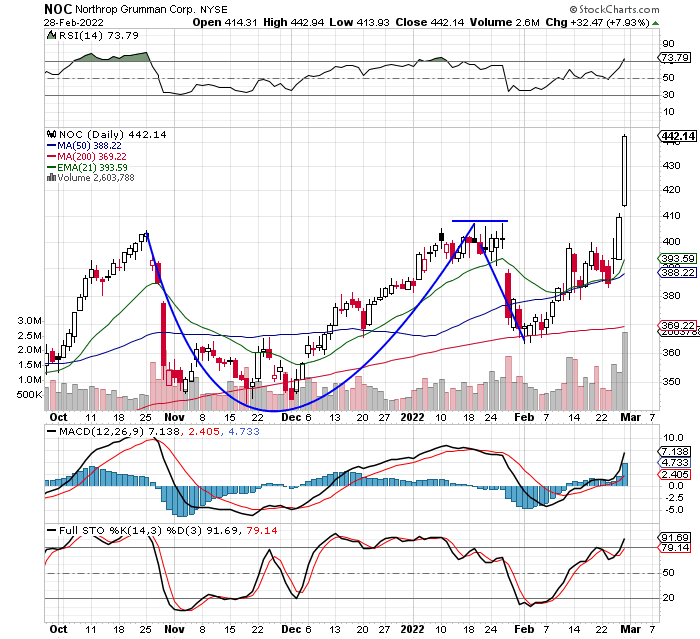 Obviously, the $409 pivot I gave you for NOC on Thursday has been triggered. The shares have just entered into short-term technically overbought territory. You are not wrong if you take profits here. That would make you a trader.
When it comes to national security, I am an investor. I gave you a $490 target price, and I meant it. I am not taking any NOC off at this time. 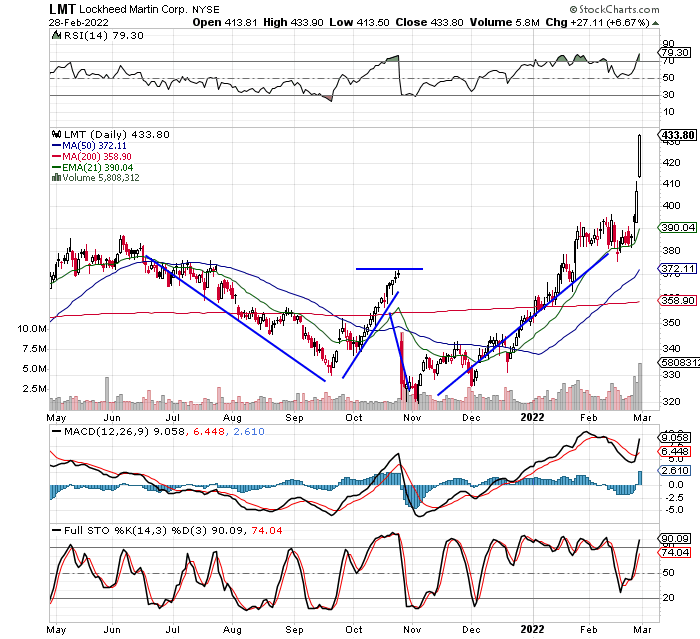 This LMT chart is more fully developed than the NOC chart. For LMT, the $378 pivot coming off of a double-bottom reversal had been triggered well before Russian boots had trod on Ukrainian soil. The invasion merely accelerated the breakout.
Here as well, I have a higher price target ($465). I am not making any sales in my defense contractor names at this time.

Respect the Trends and Buy Weakness

Our song remains the same.