Amid Tuesday's market decline, two of the index charts saw some deterioration as the "return lines," as recently discussed here, appear to be reasserting themselves on the larger-cap indexes, at least for the moment.

And while some charts saw some technical weakening, the Insider/Buy Sell Ratio saw an uptick in selling activity and turned bearish while the Detrended Rydex Ratio moved deeper into cautionary territory.

As such, we believe the potential for some further consolidation of recent gains is likely. 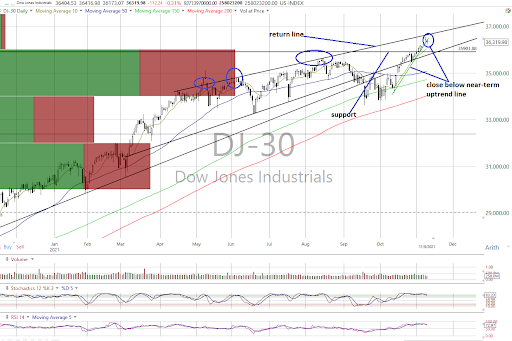 All the major equity indexes closed lower Tuesday with negative NYSE internals while the Nasdaq's were mixed.

The DJIA closed below its near-term uptrend line and is now neutral versus its prior bullish trend.

So, all remain in near-term uptrends except the Dow Transports, which is neutral.

While Tuesday's market breadth was negative, it was not sufficient to alter the uptrends of the cumulative advance/decline lines for the All Exchange, NYSE and Nasdaq.

No stochastic signals were generated at the end of trading.

The detrended Rydex Ratio (contrarian indicator), measuring the action of the leveraged ETF traders, rose to 1.42 and deeper into bearish levels as they extended their leveraged long exposure.

In contrast, the Open Insider Buy/Sell Ratio dropped to 24.3 as insiders ratcheted up their selling activity and is now on a bearish signal.

As we have stated in the past, when insiders are selling as the ETF traders continue to be leveraged long, the insiders typically are on the right side of the trade.

We remain "neutral" in our near-term macro-outlook for equities as the issues discussed above imply the markets may likely see some further consolidation of recent gains.

The Market is Hitting a Short-Term Peak

The intraday reversal Tuesday may have cooled off the momentum and will allow some consolidations and pullbacks to develop.

I think the most troubling data-point Tuesday was the analysis concerning contract or 'home-purchase agreement' cancellations.

Japan Rises Above Pre-Covid Levels, Set for 3 Years of Growth

The tortoise of Japan may be far behind the hare in the West, but Tokyo is pacing itself for steady multiyear growth.