By STEPHEN GUILFOYLE Apr 19, 2022 | 06:57 AM EDT
Stocks quotes in this article: FITB, HAL, HAS, JNJ, LMT, SBNY, TRV, TFC, IBM, NFLX, FMCC
I have no Fed speakers on my radar for this Friday, which is April 22. According to the Federal Reserve itself, the blackout period going into the May 4 policy decision begins on April 23, which is this Saturday. Through this Thursday, however, the Fed's public calendar is somewhat active.
This includes the Beige Book on Wednesday, as well as two appearances by Fed Chair Jerome Powell on Thursday, as well as another appearance by the FOMC's current leader of hawkishness, St. Louis Fed President James Bullard. One thing about Bullard, for the new kids, or those just new to Fed watching, the man is like an open book. He tells us what he thinks. He is not an ideologue. He does change his mind, and most interestingly, James Bullard is never, and I mean never boring.
James Bullard spoke publicly on Monday. Bullard spoke later in the day, so he is not the primary reason for what weakness markets showed on Monday, but he remains something of a catalyst nonetheless. For one, trading volumes were exceedingly light on Monday. Markets sold off throughout the afternoon, only to regain much of what ground had been lost in the final moments as a thinly lined point of sale was hit broadly by "buy programs" as short-term traders bet on at least a short-term (bear market, overnight) rally off oversold conditions.
In a virtual presentation before the Council on Foreign Relations on Monday, Bullard said that inflation is "far too high for comfort, and so we have to move to get inflation under control... not all hope is lost here. I think we're in a position where we can maintain credibility and get inflation lower." Bullard is confident in the U.S. economy's ability to grow above trend this year, and even sees the unemployment rate potentially going lower from here, perhaps below 3%. He sees policy as still accommodative (which it currently is), and even adds, "I don't think you can blame a recession on the Fed."
When a recession does come, I think I can assure you that the Fed will be where much of the blame lands publicly, regardless of the fact that a global pandemic forced shortages upon those with extended supply lines, a rather large kinetic war in Ukraine and the sanctions associated forced a new scarcity into energy and agricultural commodity markets, and legislative abuse of domestic fiscal policy all certainly played at least as large, if not a larger role.
It was what Bullard said regarding short-term (fed funds rate) rate targets that left the deepest impression. Bullard said, "We want to get to neutral expeditiously." Bullard infers that he would like to see the FOMC get the FFR to around 3.5% this year with multiple half point (50 basis points) hikes and that the Fed should not rule out increases of 75 bps if necessary. Bullard added, "More than 50 basis points is not my base case," but on a 75 basis point hike, said, "I wouldn't rule it out."

In a sign of the times, or rather a sign that Treasury debt security yields are getting closer to exceeding medium-term inflation expectations, real yields have been on the move.
On Monday, the U.S. 10-Year Note, at its low, or high "real yield" of the day, gave up negative five basis points, which is the closest that the 10-Year has come to a positive real yield since before the pandemic. As the Fed has started to raise nominal short-term interest rates while at least beginning the process of jawboning an actual draining of the monetary base ahead of the fact, real yields, according to the Treasury Department's own website, have moved rapidly in a northerly direction. The Fed may not yet have done much, but monetary conditions have been aggressively tightening of late, and of their own accord. In other words, a great deal of what the Fed plans to do, is already priced in.
According to the U.S. Treasury, the 10-Year Note went out on Monday at a real yield of -0.07%, after that metric posted at -0.41% as recently as April 1. The 20-Year Bond went positive in "real yield" terms on April 6 and now pays +0.22%, while the 30-Year Bond went "real yield" positive on April 4 and now pays 0.33%.
Just imagine where real yields will go if the Fed actually does manage to corral consumer-level inflation and along with it, medium-to long-term inflation expectations. This morning, 10-Year paper pays a nominal 2.9%, while that 30-Year Bond pays a nominal 2.99%. That's where.

One thing leads to another. According to Freddie Mac ( FMCC) , 30-year mortgage rates topped 5% for the first time in more than a ten-spot (decade) this month. That's not all. According to a survey conducted by the New York Fed (which I found at Bloomberg News), U.S. consumers in aggregate are projecting 30-year mortgage rates of 6.7% a year out and 8.2% in three years.
In addition, this survey shows that 71% of respondents thought that purchasing property in their current zip code was a "somewhat good" to "very good" investment idea, which is down from 73.6% in 2021. Of respondents, 9.9% thought that housing was a poor investment idea, which is up from 6.5% last year. The average probability of a household purchasing a home if that household moved over the next three years dropped to 60.7% from 68.5% in 2021. This is the first annual year over year decline for this metric since the New York Fed started asking in 2014. Renters see their monthly expense for shelter rising 11.5% over the next year, up from last year's 6.6%.

On Monday, the World Bank got around to factoring in the war in Ukraine as well as other factors and ratcheted down the Washington-based institution's January projection for global 2022 GDP growth of 4.1% to a newly revised 3.2%. Earlier in April, the World Bank had projected that the Ukrainian economy would contract 45.1% this year, while the Russian economy would contract 11.2%. Growth had been expected for both. This has forced the bank to place a -4.1% projection on the Europe/Central Asia region as a whole, according to Reuters.
World Bank President David Malpass also stated that the bank is "preparing for a continued crisis response, given the multiple crises. Over the next few weeks, I expect to discuss with our board, a new 15-month crisis response envelope of around $170B to cover April 2022 through June 2023."

Tail of the Tape

This morning, long-time Sarge fave Lockheed Martin ( LMT) goes to the tape with its first-quarter earnings. Expectations are for EPS of $6.20 (-5.5%) on revenue generation of $15.5B (-4.4%).
What likely matters more than anything else this morning for shareholders will not be the results, but what is said around future sales to NATO allies and other nations now that Russia has shown Europe its aggressive side.
We already know that the Pentagon has cut back on F-35 Lightning purchases for this year and that decline has been mostly made up by Germany's plan to upgrade that nation's military alone. There are and will be more.
For the trader, it is the chart that enters Tuesday trading at an inflection point: 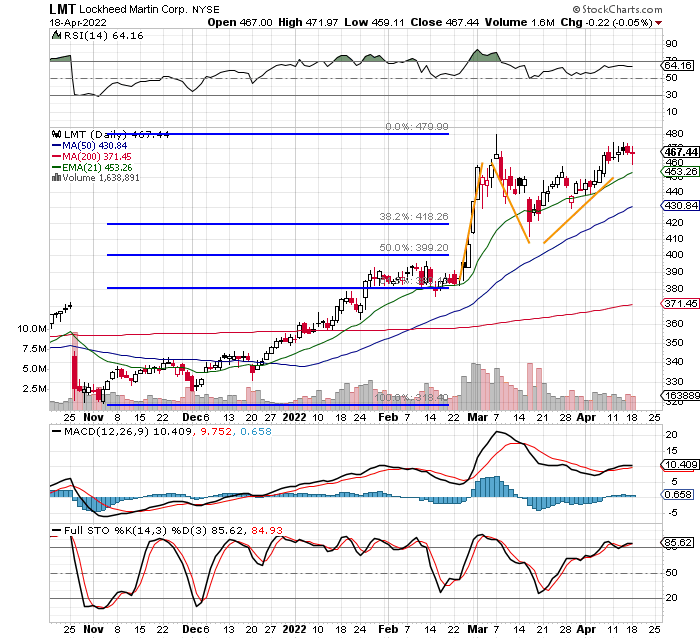 Should LMT come in from here, chart watchers will see the selloff as a result of a double-top reversal. However, one might also see a bull flag (first half of March) attached to a flagpole (late February into early March) and the current action, if the stock reacts positively today as a continuance of trend. That would make $480 the new pivot.