Stocks are strong at the open Tuesday, which may finally be confirming the market data that has been strongly suggesting some pause /bounce from recent market weakness over the past few sessions. Indeed, these bullish signals have increased to even more significant levels as noted below.

With that said, we believe that the charts of the major equity indexes need to see violations of resistance as well as downtrends to draw the assumption that the market correction has been completed.

So, while some rays of hope are starting to appear, some degree of caution is still advisable until more positive evidence appears. 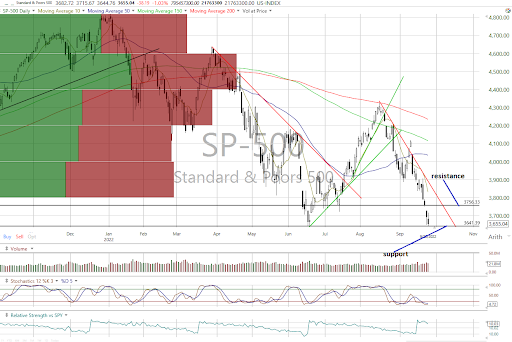 All the major equity indexes closed lower Monday with negative internals on both exchanges as market weakness persisted.

However, while all closed in the red, only the Value Line Arithmetic Index closed below its support level as the rest managed to hold, in contrast to all supports failing over the past several sessions. Yet, all remain in near-term bearish trends that have yet to show implications that selling pressure has been exhausted.

Cumulative market breadth continued to deteriorate and is negative for the All Exchange, NYSE and Nasdaq.

The stochastic readings remain deeply oversold on each index chart but have not yet been able to generate bullish crossover signals.

The data has moved to levels strongly suggesting a pause/bounce from the downdraft has become more probable.

The percentage of S&P 500 issues trading above their 50-day moving averages (contrarian indicator) dropped to 3% and is on a very bullish signal that displays the lack of a place to hide in equities. 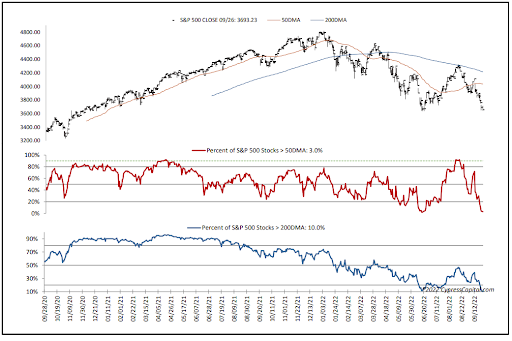 The Open Insider Buy/Sell Ratio lifted to 77% as insiders did some buying, but remains neutral.

The detrended Rydex Ratio (contrarian indicator) is in very bullish territory at -2.93. It remains at a level that has only been exceeded five times in the past 10 years as the typically wrong leveraged ETF traders are extremely leveraged short.

This week's AAII Bear/Bull Ratio (contrarian indicator) rose to 2.59 and is still on a very bullish signal as well, with bears outnumbering bulls by more than 2 to 1.

The forward 12-month consensus earnings estimate from Bloomberg for the S&P 500 slipped to $230.94 per share. As such, its forward P/E multiple dropped to 15.8x a slight discount to the "rule of 20" ballpark fair value of 16.1x.

The data are sending strong signals of relief. Should the indexes manage to hold onto their strong open gains, more relief may be on the way. Yet, we need breaks above resistance to be more confident.