I noted on Thursday morning that there was some toe-dipping, as folks had moved from one side of the fence to fence-sitting. Then Thursday's rally probably brought a few more into the pool.

First of all, the American Association of Individual Investors (AAII) surprised me by barely budging in the last week. Typically, this survey encompasses the current week through Tuesday, so it's surprising that the bulls only nudged up two points to 29.5%. I suspect we see a big jump next week but for now, these folks are not in the pool. 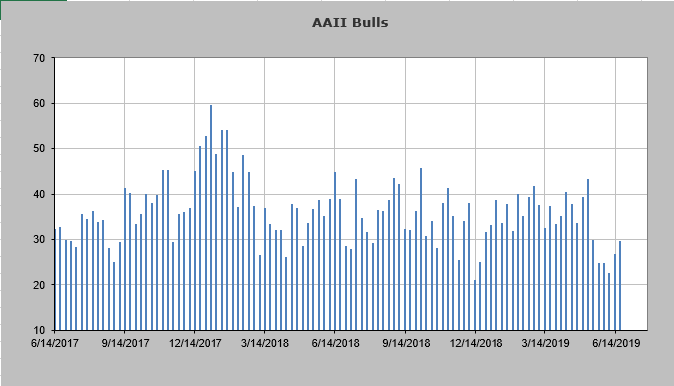 When it comes to the put/call ratios, which are much more sensitive and therefore encompass the day-to-day trading, we see a bit more acceptance of the rally. For example, the put/call ratio for exchange-traded funds on Wednesday was 99%, the lowest reading in about two months. I mostly shrugged at that. But with Thursday's reading of 70%, I can say that there is a shift taking place that is more than tiny. Has it reached complacent or giddy yet? No. But it shows folks aren't fighting the rally as much as they were.

The 10-day moving average of the put/call ratio slipped to 89%. Once it gets under 90%, I call it acceptance of the rally. My guess is it goes lower before it starts to bottom out and we start to call it complacency or giddy. But it no longer shows folks are "too bearish."

Finally we have the Daily Sentiment Index (DSI), which you might recall was flirting with single-digits three weeks ago when we were near the lows. The S&P is now at 85 while Nasdaq is at 82. So this short-term sentiment guide is now leaning toward complacency. Over 90, and I'd call it giddy.

Then there are the market internals. Breadth is good. That keeps the McClellan Summation Index rising, which is a positive. It now needs a net differential of -3000 advancers minus decliners to halt the rise. That means it is now solidly overbought. At -4000 it would be into an extreme overbought condition.

The number of stocks making new highs finally expanded on Thursday. We got the big expansion two weeks ago, but it did not see an expansion beyond those levels this week until Thursday. Now there is an expansion for both the New York Stock Exchange and Nasdaq. Increasing new highs is a positive for the market.

I think due to the overbought-ness and the short-term excitement over the market we can see a pullback. But with the internals still good, I think pullbacks will lead to another rally.

I want to end by noting that the daily sentiment index for gold is at 94, which is the highest since it tagged 96 in the summer of 2011 -- the all time high for Gold. So it probably needs to cool its heels a bit; I would not chase it.

Get an email alert each time I write an article for Real Money. Click the "+Follow" next to my byline to this article.
TAGS: Markets | Rates and Bonds | Technical Analysis |

Would a Common EU Bond Give U.S. a Run for Its Money?

The European Union has unveiled a historic proposal to fund fiscal stimulus through a common bond issuance, and it could mean real competition for the U.S. Treasuries.

The Fed Isn't Going Negative, and Isn't Trying to Bail Out Losers, Either

Those chasing returns in credit need to be aware of what the Fed is and isn't trying to achieve, so let's dig in.

The Market Will Have Its Moment of Reckoning

As we look at why the S&P 500 is stuck in its narrow range, we see every retail investor and trader chase the same basket of names higher, edging closer to a technical point where the market could lose its support.

Making Sense of These 3 Big Headlines of the Week

Here's my take on the Fed's corporate bond ETF buying, Germany's ruling on quantitative easing and the Treasury's decision on new bond sales.

This is a game in which Jerome Powell & Co. have played their turn, and now await their opponent's move; also here are the bonds to own now.