There's a pattern emerging: The market sets itself up for an oversold rally, I take a few days off, and lo and behold, it rallies while I'm away. This also happened Christmas week. Soon folks will request I am never at my desk.

When I departed for a trip last weekend, I noted we were oversold as of Monday and that if we saw the market down on Wednesday, some sentiment indicators would cross over to extreme. The market did fall on Monday and something fascinating happened: Fewer stocks made new lows and despite the S&P 500 falling seven points on the close, breadth was two-to-one positive. Also, the Daily Sentiment Index for Nasdaq slipped under 10, forcing it to an extreme.

Now that we've rallied the S&P almost 4%, let's check on that rally and see how it has fared. Breadth could have been better. It should have been better - especially after being fantastic on Monday. Yet here's the big change: For the first time since early April, the McClellan Summation Index stopped going down. It hasn't exactly turned upward, but it halted the downward move.

That contraction in stocks making new lows on Monday was a nice positive divergence, but here we are almost 4% higher, and the number of new lows on the New York Stock Exchange Monday was 113, while Thursday it was 102. That number should be under 50 by now, and it isn't.

Yet the number of stocks making new highs has increased. The NYSE has nearly 200 new highs, which is nothing to scoff at. The iShares iBoxx $ High Yield Corp. Bond (HYG)  Fund, an exchange-traded fund for high yield bonds, looked awful a week ago, but has rallied strongly. And remember that head-and-shoulders top everyone fretted over? It has been negated, too.

We also saw the first inkling of acceptance of the rally on Thursday in sentiment. The total put/call ratio moved down to 85%, the lowest reading in more than two weeks. The 10-day moving average still looks like it is peaking to me. But the most interesting aspect of the put/call ratios was the one for the Volatility Index; it has sunk to 14%. Recall that readings under 20% for this metric mean that far too many are now betting on a higher VIX, so this tends to be bullish for stocks.

The Investors Intelligence bulls came down to 42.7%. Recall they were over 55% six weeks ago, so that's quite a shift. They are also more in line with the American Association of Individual Investors survey. The AAII saw the bulls fall and the bears rise again. Last week we discussed the four-week moving average of bears and as you can see this week's reading of 40% pushed this moving average up into "too bearish" territory. 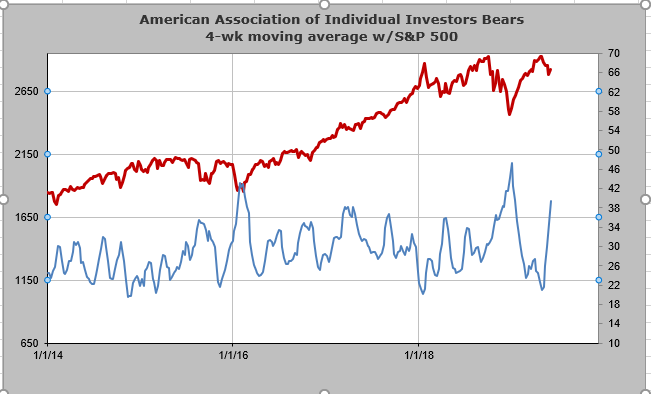 The S&P has rallied to fill that gap from two weeks ago, so a pause or a pullback is possible. But we're not yet back to an overbought reading. If we do pullback, I'd expect another rally attempt next week.

Get an email alert each time I write an article for Real Money. Click the "+Follow" next to my byline to this article.
TAGS: Markets | Rates and Bonds | Technical Analysis |

Let's Pop All the Hype About a Bond Bubble

Three things tell me not only isn't there a bubble, but we actually might see a near-term bounce from a trading perspective.

There's Just Too Much Money Sloshing Around

This money spigot is very unlikely to be shut off any time soon.

I want you to think about how quickly the long end of the U.S. Treasury curve is moving.

If rates are going to keep rising from here, both of these things need to happen.