Once again, several resistance levels were violated on the charts Thursday as the recent rally continued.

The data finds the 1-day McClellan OB/OS Oscillators more overbought and cautionary as stochastic levels remain elevated as well, offering some caution. On the other hand, sentiment (contrarian indicator) remains encouraging as the crowd is still largely bearish and the leveraged ETF traders continue to cover their short exposure.

The spread between the S&P's forward P/E and ballpark fair value also tightened.

So, while we remain positive, we would not be surprised to see some pause of recent strength over the near-term. 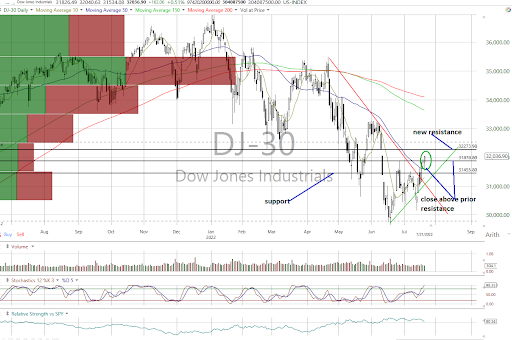 The major equity indexes closed mostly higher Thursday with the one exception of the Dow Jones Transports posting a loss. All closed near their intraday highs with positive internals on the NYSE and Nasdaq as trading volumes declined on both. This leaves every index chart in a near-term uptrend.

More resistance levels were violated on the DJIA (see above), Nasdaq Composite, Nasdaq 100 and S&P MidCap 400.

Market cumulative breadth is also positive on the All Exchange NYSE and Nasdaq.

However, the stochastic readings are casting a bit of a shadow as all are overbought and in the high 90s. Yet bearish crossover signals have yet to be generated.

The McClellan Overbought/Oversold Oscillators remain on a cautious signal as all are overbought (All Exchange: +92.60 NYSE: +98.34 Nasdaq: +89.86).

The percentage of S&P 500 issues trading above their 50-day moving averages (contrarian indicator) is neutral, rising to 55%.

The detrended Rydex Ratio (contrarian indicator) dropped further to -1.21 but remains bullish as the leveraged ETF traders have been covering their shorts but are still leveraged short.

The forward 12-month consensus earnings estimate from Bloomberg for the S&P 500 has dipped further to $237.32 per share. As such, the S&P's forward P/E multiple is 16.9x as the spread of its discount to the "rule of 20" ballpark fair value at 17.1x narrowed.

The recent rally continued Thursday with no negative signals coming from the charts that should be respected. However, a few yellow lights are flashing with the stochastic levels and McClellan OB/OS Oscillators overbought. With the scales a bit more evenly balanced, we still believe some pause of recent strength within a positive environment is becoming more likely over the near-term.