After another volatile day on the market, what's next?

All the major equity indexes closed near the midpoints of their intraday ranges Tuesday with two indexes violating support. As such the index near-term downtrends remined intact.

Yet multiple bullish stochastic crossovers were registered suggesting some upside. Also, the data is bright green across the board, at levels seen infrequently, suggesting a notable rally is likely forthcoming.

Therefore, we now believe rallies on the indexes to their respective resistance levels, which are sizably above current levels, are quite likely. 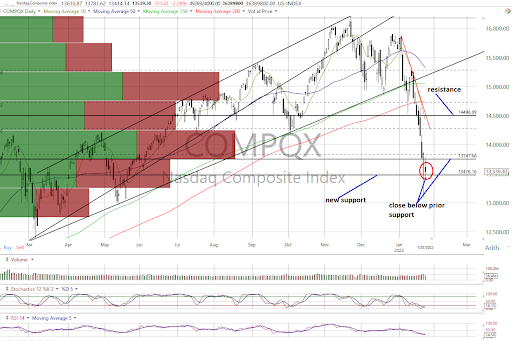 All the major equity indexes closed lower Tuesday with negative NYSE and Nasdaq internals on lower volume. Early losses that reversed midsession were not sustained as all closed near their intraday midpoints.

The Nasdaq Composite (see above) and Nasdaq 100 closed below support and are still in near-term downtrends as are the rest.

Market cumulative breadth remains weak and negative on the All Exchange, NYSE and Nasdaq.

However, a ray of sunshine is coming from the bullish stochastic crossovers registered on the S&P 500, DJIA, MidCap 400 and Value Line Arithmetic Index as they suggest some near-term strength.

What may be of greater importance, though, are the data that are sending strong signals that a notable rally may be on the threshold.

The McClellan 1-Day Overbought/Oversold Oscillators remain deeply oversold with plenty of fuel in the tank to support more upside (All Exchange: -99.97 NYSE: -111.77 Nasdaq: -93.58).

The percentage of S&P 500 issues trading above their 50-day moving averages dipped to 32%, still at levels coincident with correction lows.

The Open Insider Buy/Sell Ratio jumped further to 96.5, surpassing Tuesday's 82.8 that was the most aggressive buying on their part since May 2020.

The detrended Rydex Ratio (contrarian indicator), measuring the action of the leveraged ETF traders, dropped further to 0.22 as they abandon ship from their leveraged long exposure.

While Tuesday's performance was lackluster, Monday's rally combined with the data dashboard that is flashing bright green suggest a notable rally to resistance levels has become likely.