By STEPHEN GUILFOYLE Nov 18, 2021 | 07:46 AM EST
Stocks quotes in this article: KSS, M, AMAT, INTU, PANW, WSM, WDAY, NVDA, CSCO, AMZN, V, MA, AFRM, XOM, CVX, XLE, CAR, XLF
The S&P 500 gave up just a little ground on Wednesday. The Nasdaq Composite? Same. Narrower, more forced measures of large-cap equity performance such as the Dow Industrials, and the Dow Transports had a rougher go of it.
Blame Visa ( V) ? Sure. Blame Visa, or actually blame Amazon ( AMZN) and Visa for Visa's performance. That takes care of the Industrials, though only one of the two is actually in the index and neither is actually an industrial. The transports were more easily explained as delivery services, truckers, some of the rails, of course Avis ( CAR)  , and maritime services, with the Baltic Dry Index in outright collapse, all took a tumble. For those with an interest, small-caps were also slapped around as the U.S. dollar index finally rested.
Breadth on Wednesday was a little gnarly, as it has been all week. Total losers more than doubled winners both at the Big Board, and up in Midtown. Aggregate trading volume moved sideways for NYSE-listed names, while trading volume decreased significantly for Nasdaq-listed names on Wednesday from Tuesday. Advancing volume comprised just 31.8% of the composite for NYSE-domiciled equities and 35.2% for Nasdaq stocks.
There was some demand for Treasury securities on Wednesday, as most of the yield curve flattened, This put upward pressure on more defensive sectors of the equity space. Three of the four S&P sector select SPDR ETFs that closed in the green would be considered defensive. Conversely, places 8 through 11 on the daily sector performance tables were reserved for cyclical-type sectors, led lower by Energy ( XLE) for good reason, and due to that flattening yield curve also Financials ( XLF) .
Surely those actively trading these markets have felt, to a larger degree, the indexes move, and more specifically, and hopefully enjoyed the volatile moves across narrow and "younger" parts of our marketplace, such as electric vehicles and everything to do with what is now broadly accepted as a general industrial transition, at least across developed economies. The S&P 500 has been (perhaps) building a base of consolidation now for almost two weeks. Ditto for the Nasdaq Composite.
Check this out: 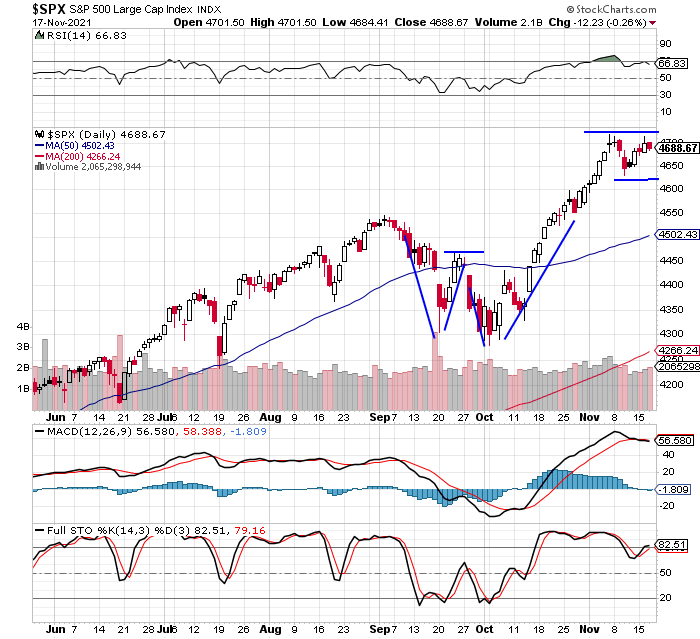 Readers will see (and probably benefited from) the October into early November breakout for the broader marketplace from a 4665 pivot created by September's "double bottom" pattern. (That volatility, we did telegraph well in advance here in this column as well as on national television on multiple occasions.)
Now comes what we call the "quiet season."
Of course this is no exact science. Most of us, your author included, do expect to see a rally into the year's end. First, however, these higher prices must be digested. The reduction in both participation and trading volume that usually accompanies a time of year that sees both the end of third-quarter earnings season as well as the start of the holiday season can often offer traders this respite.
Once earnings are out of the way, and the other season gets started in earnest, we find out who is "done" for the year, who will go into a "prevent" defense, and who needs to catch up. At that point, the desperate chase performance while other, more fortunate souls selectively take losses for tax purposes. Still, we are up to a month away from that mayhem. For now, with the exception of news-specific events, we become quiet. We "hush."

I see WTI Crude futures trading close to $78 per barrel early on Thursday morning. On Wednesday, bottoming just above $77 per barrel, WTI traded at six-week lows, after trading at six-year highs in October.  As U.S. production has declined roughly 12% from pre-pandemic highs in response to early Biden administration shifts in domestic policy, energy prices have turned out to be the primary driver for what now appears to be "out of control" (transitory or not) consumer-level prices.
The Biden administration has turned to multiple sources to try to get this rampant energy-focused inflation under control. The administration has appealed to the Saudis, the Russians, and several other OPEC+ nations to increase production. The administration has also considered releasing crude from the strategic reserve, while the president asked President Xi of China to do the same at Monday's virtual summit.
On Wednesday, in a letter to FTC Chair Lina Khan, President Biden mentions "mounting evidence of anti-consumer behavior" by the two "largest oil and gas companies." Biden goes on... "The bottom line is this: gasoline prices at the pump remain high, even though oil and gas companies' costs are declining."
The two largest U.S. oil and gas companies by market cap are Exxon Mobil ( XOM) and Chevron ( CVX) . Shares of the two companies surrendered 1.1% and 1.6%, respectively, for the session as the ( XLE) ETF gave up 1.53%.
Of the two oil and gas giants, Exxon and Chevron did not directly comment. The American Petroleum Institute referred to the president's letter as a "distraction from the fundamental market shift taking place" while laying blame for reduced U.S. supplies directly at the feet of the administration.
On that note, Beijing announced overnight that China will be releasing some crude from its strategic reserves after being asked by the United States to participate in a joint sale. This, as well as the Biden administration letter, are why your oil stocks took a sudden mid-week turn for the worse.
In my experience, if the demand is there, and it is right now, releases from strategic reserves have only a passing impact. The FTC? You never know how far that goes. Different president. Different FTC head.

So, e-commerce giant Amazon ( AMZN) says that it will stop accepting Visa ( V) credit cards issued in the U.K. starting on Jan. 19. High interchange fees are to blame, according to Amazon.
The story became infinitely more interesting once Bloomberg News reported that Amazon might consider pulling its co-branded and highly popular credit card away from Visa and create a new deal with Mastercard ( MA) . Stocks of both Visa and Mastercard as well as much of the FinTech space have moved sideways to lower in recent weeks. Even "BNPL" (Buy Now, Pay Later) type names such as Affirm Holdings ( AFRM) have stalled.
What investors have to figure out is not so much what happens in the U.K., though that does matter, but would Amazon actually terminate the current arrangement with Visa? Perhaps this is Amazon's way of playing hardball.
It would seem that the easy pairs trade would be long Mastercard, short Visa, but that's way too obvious. Certainly, it would be far easier for Visa to offer new terms than to risk losing not just an e-commerce giant, but by far, the dominant player in that space.
Forget the pairs trade, this could be the point at which picking up either Visa or Mastercard "on the cheap" sounds good. Just be fully cognizant that with BNPL stealing market share and Amazon triggering competition on the credit-card side, it would appear to this casual observer that elevated interchange fees are only going to face downward pressure from here.
If one has to, or wants to play the space, I would lean toward taking on an undersized exposure to Mastercard, but I would not expect anything about this to be easy.

Disappointment. Seems to be almost every quarter. I mean usually Cisco Systems ( CSCO) does beat expectations for both the top and bottom lines. That said, investors never seem satisfied. This time, for the company's fiscal first quarter, Cisco fell short on top-line expectations, and took guidance for current-quarter revenue generation down to well below consensus view. Fiscal full-year 2022 guidance won't knock your socks off either.
Importantly, the numbers within the numbers, to a large degree, also disappointed. On the product side, Hybrid Work fell into outright contraction, while End to End Security, supposed to be an area of growth, managed just to grow just 4% over last year, with white collar America still largely working remotely.
Even more disappointing, I found, was that Cisco's transition to a recurring revenue model appears to have stalled. Eighty percent of software-driven revenue was driven by the subscription model, down from 81% sequentially. Remaining performance obligation ended the quarter below where it started. After the company disappointed on revenue? That's not good.
The most encouraging thing I can say about Cisco this morning is that the company pays shareholders $1.48 a share per year to hang around for a dividend yield of 2.6%. On top of that, Cisco leaves about $7.7B on its current share repurchase authorization. Are those good enough reasons for shareholders to tough it out with the firm? Not for me. This stock now appears to be close to a year away.
Overnight, I see CSCO trading at roughly $53, down 6.6%. That puts my position down 3.3%. I expect to day trade the stock long enough to flatten its individual impact on my P/L, and then it will be... See Ya !!

His face surely belongs on the Mount Rushmore of corporate CEOs. Nvidia ( NVDA) CEO Jensen Huang stepped to the plate on Thursday night, and hit yet another home run.
Record Gaming revenue, record data center revenue. Rising margin. Terrific guidance.
I am long the name, and it probably needs a piece all its own. BRB.

The best indicator of a tradable bounce is when stocks stop going down on bad news.