Do you get the sense that folks were more bullish after last Wednesday's rally than they were after Monday's rally? That's the sense I get. I suppose that is because last week's rug pull is so fresh in minds. I suppose it is also because the S&P 500 couldn't seem to recapture 3700 on Monday.

So let's talk about the statistics we saw during the rallies.

Yes, they were better last week on an apples-to-apples comparison. For example, last Wednesday saw the S&P gain nearly 72 points and Monday saw it gain nearly 93, yet breadth was better last week (+2,400) vs. this week (+2,200). Monday felt like new money poured into the market for the new quarter and it all went to index-type stuff.

But now let's discuss where the indicators are. Last week's rally saw the McClellan Summation Index still heading down, as it is now. However, after last week's surge this indicator still needed a net differential of +2,700 advancers minus decliners on the NYSE. We enter Tuesday with that number at +700. This is also the closest we have been to halting the decline in nearly two months.

Last week the number of stocks making new lows was just beginning to contract. The contraction continued as we plunged again late in the week but now the 10-day moving average of this metric is peaking, or trying to. 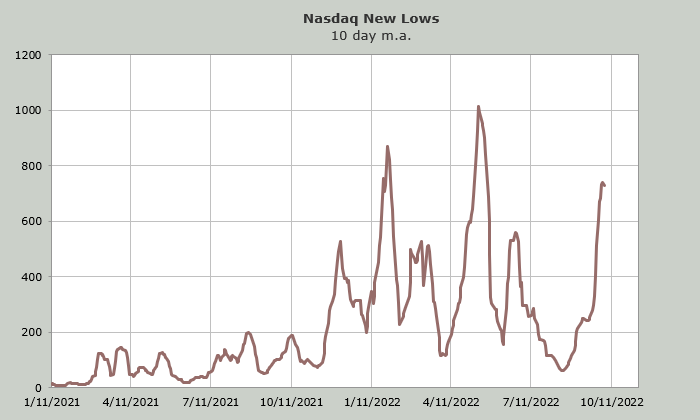 Using Nasdaq's statistics, we see two prior big peaks. The first was late January (noted on the chart of the Nasdaq below) and the second was May (also noted on the chart below). The March low and the June low came when the indicator was at a lower high.

Then there are the new highs for the Nasdaq. They now chime in at 57. I will grant you that there are a lot of SPACs on the list (something I do not like) but the last time Nasdaq had 57 new highs was September 12 when Nasdaq was 1500 points higher than it is now. 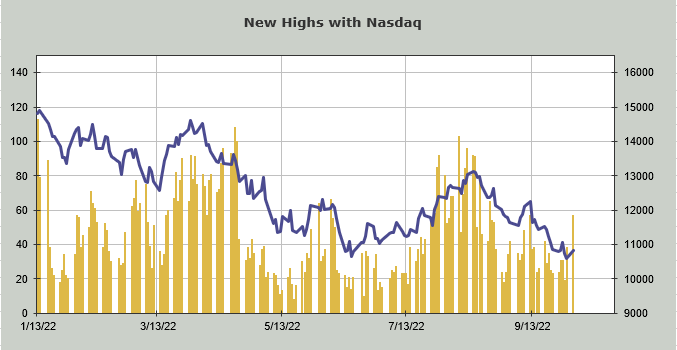 Sentiment-wise I have discussed the ISE equity call/put ratio quite a bit in the last few days because it went under 1.0 last Thursday, something it doesn't do very often. Then it did it again on Friday, also a rarity. Well, on Monday, the equity reading was below the total reading, something that has only happened once since the 2020 lows. If I go back beyond 2020 to find other instances then most instances saw the market moved higher in the ensuing weeks.

I don't think the market is in great shape (there are no bases) but I do think even if we give back some of Monday's rally that we should see another push upward because we are not yet overbought.

I want to end by noting that I have seen a great deal of shifting in terms of bond sentiment. A week ago all anyone wanted to buy was T-Bills, even my mother. Now that rates have moved down there are many, including some well-known and well-respected investors, who believe rates have peaked for now. That to me is where the sentiment shift is the greatest.

Get an email alert each time I write an article for Real Money. Click the "+Follow" next to my byline to this article.
TAGS: Bonds | Indexes | Investing | Markets | Put Call | Stocks | Technical Analysis | Trading | U.S. Equity