All the charts of the major equity indexes remain in near-term downtrends that have yet to show signs of reversal. However, we would note Thursday's losses occurred with positive breadth and higher volume on the NYSE and Nasdaq.

What's more, while the charts have not shown signs of encouragement, the data, particularly regarding investor sentiment, continues to build what we suspect to be upside pressure for a rally that could prove to be of some significance should an unknown catalyst hit the tape.

As such we believe some selective buying is currently warranted. 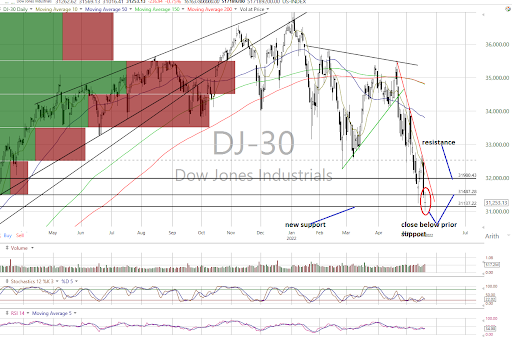 The major equity indexes closed mostly lower Thursday except for the Russell 2000, which managws to end in the green. While one day doesn't create a trend, we would note the declines masked positive breadth and good volume on both exchanges.

The DJIA (see above) and Dow Jones Transports closed blow their respective support levels, leaving all the charts in short-term negative trends with no signs of reversal.

However, cumulative breadth remains neutral for the All Exchange, NYSE and Nasdaq that were previously bearish.

The Data Builds Upside Pressure for the Markets...

... Especially regarding sentiment, should unexpected, good news hit the tape.

The percentage of S&P 500 issues trading above their 50-day moving averages (contrarian indicator) dropped to 14% and remains bullish.

The Open Insider Buy/Sell Ratio slipped slightly to 108.6 and is neutral although the past several sessions have seen an increase in their buying activity.

In sharp contrast, the detrended Rydex Ratio (contrarian indicator) remains very bullish, dropping to -3.28 as the leveraged ETF traders are leveraged short up to their eyeballs. Its chart shows only five times in the past decade have the ETF traders been so heavily leveraged short, all of which were followed by rallies. So, the Rydex/Insider dynamic is very encouraging. 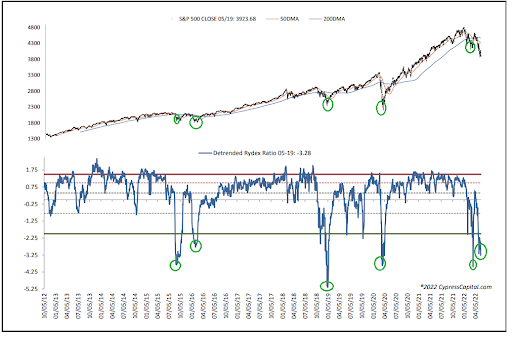 As noted Thursday, the crowd is essentially entirely on the bear side of the boat that usually finds sizable up moves as sentiment eventually starts to shift.

Despite the charts, market sentiment and valuation suggest some selective buying may be appropriate.