The market data that we have discussed here repeatedly of late was very prescient with its cautionary signals. However, that same data has now turned largely neutral and as a result, less foreboding in its near-term implications.

As such, we believe the charts and data are now implying some near-term sideways action that has yet to be decided to which direction it will be resolved.

We suspect it will be to the positive but is too early to say so with confidence. However, we continue to lean in the direction that equities should be bought near support levels.

Some Indexes Turn Neural & Below 50 DMAs 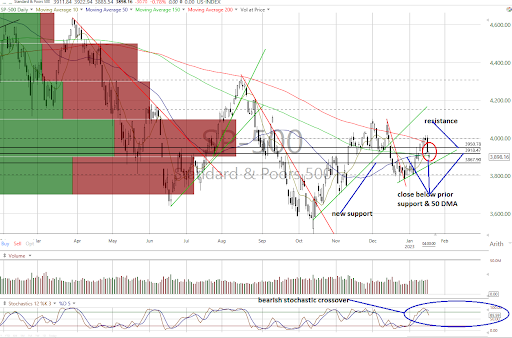 On the charts, all the major equity indexes closed lower thursday with negative NYSE and Nasdaq internals on lighter volume.

The down session ended with the S&P 500 (see above) and DJIA closing below support while the DJIA, Nasdaq Composite and Nasdaq 100 closed below their near-term uptrend lines and are now neutral with the rest still in uptrends.

Also, the 50-day moving averages were violated on the S&P 500, DJIA, Nasdaq Composite and Nasdaq 100.

Cumulative market breadth remains positive on the NYSE, Nasdaq and All Exchange as all help their uptrend lines.

The stochastic readings that were quite overbought gave bearish crossover signals across the board Thursday.

The cautionary data we have been emphasizing for a while proved to be prescient once again with now mostly neutral and less threatening than their prior very overbought levels.

The McClellan Overbought/Oversold Oscillators are mostly neutral with the NYSE only mildly overbought (All Exchange: +46.08 NYSE: +52.08 Nasdaq: +40.6).

The percentage of S&P 500 issues trading above their 50-day moving averages (contrarian indicator) dropped notably to 48% and solidly in neutral territory as well.

The detrended Rydex Ratio (contrarian indicator) dipped to -0.68 and is also neutral.

This week's AAII Bear/Bull Ratio (contrarian indicator) dipped to 1.82 as bearish sentiment declined but remains on a very bullish signal. 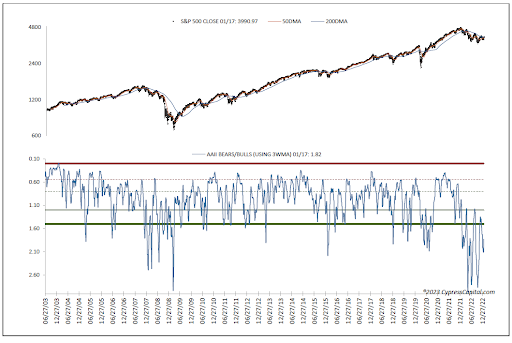 The Investors Intelligence Bear/Bull Ratio (contrary indicator) is neutral at 32.9/41.4.

The data that was waving red flags has moderated while the valuation spread has narrowed. While it is too early to declare the recent storm has passed, we are leaning in that direction and suggest buying selectively near support.