By STEPHEN GUILFOYLE May 17, 2022 | 07:26 AM EDT
Stocks quotes in this article: HD, WMT, KEYS, XLE, XLU, XLF, XLY, XLI, XLB, MSFT, AAPL, AMZN, VZ, T, TWTR, TSLA, BRK.A, BRK.B, OXY, CVX, WFC, C, PM
Rise and shine. Up and at 'em. Beat your face (military slang for doing push-ups). I'll let you know when to stop.
Tuesday morning has arrived. The most crucial morning of this week. On top of the fact that both Walmart ( WMT) and Home Depot ( HD) , two of this nation's highest profile retailers are reporting their quarters, the Census Bureau goes to the tape with April data for Retail Sales to be followed by April Industrial Production numbers to be provided by the Federal Reserve Bank.
Once traders and investors have been force fed all of that, they have to deal with a 2 p.m. ET public appearance by Fed Chair Jerome Powell who is set to speak on inflation at the Wall Street Journal's "Future of Everything" festival in New York City. Powell, who is one of at least five Fed officials scheduled to speak publicly today, is expected to conduct a Q&A session with the audience.
Equity index futures are on the rise as the wee hours pass very early on Tuesday, once again attempting to rally after similar attempts to confirm last Thursday's bullish reversal failed on Friday, due to reduced activity, and on Monday, due to what appeared to be indecisive investor behavior in response to the New York Fed's Empire State Manufacturing Survey for May. Equities were weak early on in Monday's session, then rallied quite aggressively, or at least from a sector-based perspective.
Energy ( XLE) and defensive minded-stocks rallied. Finally, late in the regular session, U.S. markets gave back most or in some cases, all of their gains. Energy stocks soared as WTI Crude itself rallied significantly in the face of slightly contracting dollar valuations and high-profile 13-F filings that showed increased "celebrity" investment.

The Empire State Manufacturing Index is the first manufacturing-based survey that investors see every month. Pretty clearly, the survey covers regionally the New York Federal Reserve district. It's not the ISM Manufacturing Index or S&P Global (formerly Markit) Manufacturing PMI, which are national surveys, or even comparable in terms of significance to the regional surveys posted by the Philadelphia or Richmond Feds, but it is first, and it often does send a signal. We'll hear from Philly this Friday.
New York stunned economists on Monday with a general or headline reading of -11.6, versus expectations for about 15.8, and down from April's 24.6 (zero is the border between expansion and contraction). The headline number was driven lower by weakness across a number of sub-components, where the real kick in the guts came from "New Orders," the lifeblood of any manufacturing-based survey.
New Orders for May in New York printed at -8.8 down from 25.1 in April. Shipments dropped to -15.4 from 34.5, Unfilled Orders dropped to 2.6 from 17.3. These metrics of performance all suffered in April as "Prices Paid" remained hot... 73.7 versus 86.4, as did Prices Received (45.6 versus 49.1).
However, and this may be the kicker, upward pressure on payrolls (downward pressure on margin) was certainly present in May. "Number of Employees" popped from April's 7.3 to 14.0 while "Average Employee Workweek" grew from 10.0 to 11.9.

Profit margins (according to FactSet) held at fairly strong levels during the first quarter of 2022, which may have surprised more than a few folks. The S&P 500 (with 91% of the index having already reported) posted an aggregate profit margin of 12.3% for Q1 2022 versus 12.8% for Q1 2021, with 51% of reporting firms posting a margin decrease from one year earlier and 49% of reporting firms reporting margin expansion. Seven of the 11 S&P sectors reported aggregate margin expansion for Q1 2022 from the year-earlier period with the most notable increases made in Energy and Utilities ( XLU) .
Sizable margin erosion was experienced across the Financial ( XLF) , Consumer Discretionary ( XLY) , Industrials ( XLI) and Materials ( XLB) groupings. Interestingly, despite the sheer number of firms that have mentioned inflation as a headwind in the post-earnings conference calls, consensus view for S&P 500 profit margin for Q2 2022 is still for 12.5%, down only slightly from the 12.7% that had been expected at the close of the first calendar quarter (March 31st).

Bloomberg News reported on Monday that Microsoft ( MSFT) was planning to double its budget for employee salary increases and boost the range of stock compensation the firm gives to some workers by at least 25%. This move will be made as Microsoft tries to retain talent. According to Payscale, the average salary of a Microsoft employee is $122,987 annually along with an average bonus of $14K. The move will for the most part impact "early to mid-career" employees. (The heck with the older employees that are less likely to leave.)
Readers may recall that in December, Apple ( AAPL) passed out stock bonuses valued at up to $180K to several "top-tier" talents to keep them from leaving. Last month, Apple went in for a second round of stock bonuses valued at up to $200K. In addition, this past February, Amazon ( AMZN) announced that it would more than double the maximum base salary paid to employees to $350K from $160K.
Margin expansion? Survey says....

Verizon ( VZ) took a page out of AT&T's ( T) book and started notifying customers as well as large corporate clients in order to inform them of coming price increases. Consumers will see an increase of $1.35 in administrative charges for each voice line beginning this June. Business clients will experience an "economic adjustment" charge with mobile data plans increasing by $2.20 per month and basic service going up in price by $0.98. This will be Verizon's first price increase in two years.
Margin expansion? Survey says...

One thing going down in price of late is Twitter ( TWTR) stock price. Tesla ( TSLA) CEO Elon Musk cannot walk away from his $44B planned acquisition of the social media platform unless he can prove "breach of contract." This is just opinion, but that appears to this untrained eye to be exactly what Musk is trying to do. Should Musk simply decide to not move forward with the transaction, he would owe Twitter a $1B break-up fee as well as potentially much more in damages assuming that there would be lawsuits.
TWTR is trading with a $36 handle this morning, well below the supposed takeout price of $54.20, which would be some arb opportunity if the deal were to close at that price. Of course if Wall Street believed in the deal, the "opportunity" would not exist.
Musk spoke on Monday in Miami, and estimated that fake users or 'bots" on Twitter's site make up at least 20% of all accounts. Musk suggested rhetorically that this is the low end of his estimate and could be much higher (maybe as much as 90%). Musk stated, "Currently what I'm being told is that there's just no way to know the number of bots. It's like, as unknowable as the human soul." Twitter believes that bots comprise roughly 5% of all accounts.
Is Musk simply trying to get a better price? Is Musk trying to find a way out of the deal? Is Musk just a "bull in a china shop," who is now being directed by his legal team to act and speak in a certain way? Is Musk just the cleverest of the clever? That's as unknowable as the human soul.

One thing is clear. As investors ran away from equities earlier this year, Warren Buffett's Berkshire Hathaway ( BRK.A) ( BRK.B) ran towards the market after ending 2021 with a near record net cash position. You can read the material for yourselves.
Buffett increased his investment in the Energy sector, including beefing up his holdings of both Occidental Petroleum ( OXY) and Sarge fave Chevron ( CVX) . I was pleased to see that.
What took me by surprise was the fact that Buffett had cashiered his long position in Wells Fargo ( WFC) , which is a Sarge holding, and moved into Citigroup ( C) , which is something I had considered myself fairly recently. However, I decided against it as I would prefer the mostly domestic, more traditional banking style of the Wells Fargo business model over the more international, less net interest-focused business model of Citi. Hmm. Never like being on the opposite side of one of Buffett's decisions. We'll see about this one. 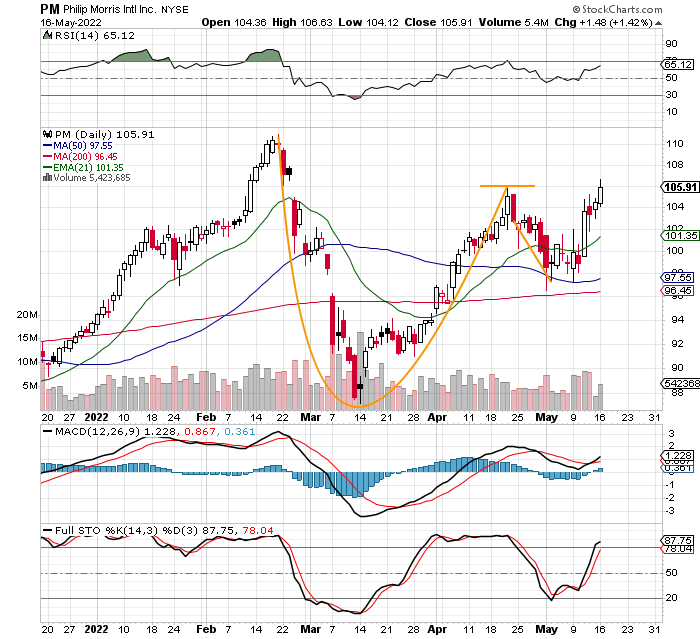 Not that I would buy big tobacco for personal reasons, but for those not bothered by such things, Philip Morris International  ( PM) closed on Monday attempting to break out past a $105.75 pivot created by a classic cup-with-handle setup.
The daily Moving Average Convergence Divergence (MACD) looks to be in good shape, while Relative Strength is yet to signal a technically overbought condition. The Full Stochastics Oscillator is not quite there just yet either, but is closer than is the RSI. Just an opinion, but a take and hold of this pivot could open the door to prices as high as $125.
Philip Morris pays out $5 in dividends per share annually for a dividend yield of 4.72%. That's a whole lot better than a sharp stick in the eye. 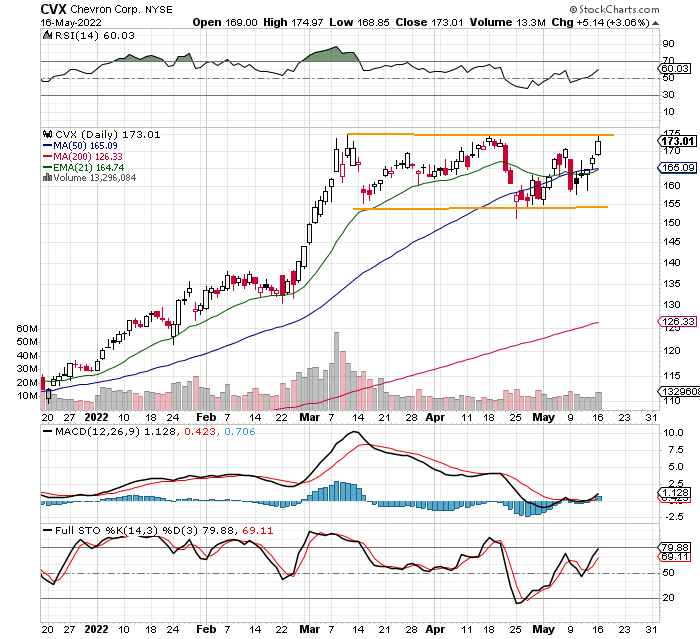 Chevron ( CVX) appears to have closed on Monday on the edge of taking a $174 pivot created by a two month long basing period of consolidation. Here, the daily MACD looks good, as Relative Strength falls well short of looking overbought. Same for the Full Stochastics Oscillator.
Should CVX take and hold pivot, my price target, as this is one of my holdings, will be $208. My panic point moves up to $165, which is where the 50-day simple moving average has caught up to the 21-day exponential moving average. Rock on.