By STEPHEN GUILFOYLE Nov 29, 2022 | 07:43 AM EST
Stocks quotes in this article: SJR, CRWD, HPE, INTU, NTAP, WDAY, DIS, AAPL, GILD, RCUS
The question now becomes this: Was Monday's selloff a bit overdone? Were markets really just ripe for some profit-taking? While it is never wrong to take a cautious approach, I don't think panic is now, or is about to be "in the air."
Risk assets were sold on Monday, globally. The pronounced catalyst was the widespread show of social unrest across mainland China. Secondary catalysts, that kept the pressure on U.S. markets later in the day, were found in a couple of hawkish-sounding Fed speakers (who really said nothing new), and news of the latest bankruptcy filing from cryptocurrency-land. This time it was crypto-lender BlockFi.
Perhaps, enough of the broad-based beatdown came about as much due to news that the protests in China would hamper holiday-quarter performance from major U.S. companies such as Apple ( AAPL) . Apple is the most widely held stock across our marketplace, while also (quite incredibly) still allowing its own supply chains and means of production to be completely reliant upon the whims of the inconsistent, totalitarian regime in Beijing.
So, yes, the S&P 500 gave up 1.54% on Monday, and the Nasdaq Composite surrendered 1.58%. Beefy enough losses for sure. The engines of the U.S. economy, both literally, and figuratively, were hit even harder as the Dow Transports took a beating of 2.06% and the Philadelphia Semiconductor Index suffered a drubbing of 2.63%. Then again, the U.S. is potentially facing a rail strike, and U..S semiconductor designers are more reliant upon Chinese customers as revenue generators than are other slices of corporate America.
The facts are this: The major and less-than-major U.S. equity indexes all sold off on Monday. All 11 S&P sector-select SPDR ETFs closed the day in the red, However, there was no real congregation of defensive-type sectors either near the top nor the bottom of the day's performance tables. Additionally, losers beat winners at the NYSE by roughly 7 to 2, and at the Nasdaq by about 7 to 3. Advancing volume took just a 15.1% share of composite NYSE-listed trade and a 38.1% share of composite Nasdaq-listed trade.
About that...
Looked at in simple terms, trading volume would have increased from a half-day holiday Friday. However, one would realistically have to admit that the two days are not comparable. The fact is that aggregate trading volume for both NYSE and Nasdaq-listed stocks was lower on Monday than it was on Wednesday, which was the last full day of trading. Compared to last Monday, aggregate trading volume increased for Nasdaq-listed names but decreased for NYSE-listed names.
The bottom line?
The S&P 500 and Nasdaq Composite both backed away from their respective 200-day simple moving averages (SMAs). They both managed to hang on to their 21-day exponential moving averages (EMAs). They both stand well above their 50-day SMAs.
No significant technical damage was done on Monday. There was probably some professional distribution Monday, but I would hardly term what happened "a day of distribution." What happened on Monday, was for the most part, profit-taking, pin action related to a couple of large names, and defensive selling. In my opinion, there has not yet been a move to significantly decrease professional long-side exposure.

Global equities were trading moderately higher on Tuesday morning, led by Chinese stocks as authorities there appeared to try to crack down on the public protests that made news on Monday. On top of that, new Covid infections in China came off of their weekend highs as Beijing at least talked about moving forward with positive changes to its zero-Covid policies. These changes could include an increased effort to vaccinate the elderly.
Much ado about nothing? It would be nice to not have to think that markets would applaud a crackdown of innocent people sticking up for themselves. We'll see.

Early on Wednesday afternoon, Fed Chair Jerome Powell will speak on labor markets at an event hosted by the Brookings Institute. That speech will follow the October JOLTs data to be released by the BLS at 10 a.m. ET and run ahead of the release of the Fed's Beige Book at 2 p.m. ET.
It is expected that Powell will take the opportunity to drive home the idea that the FOMC will likely slow its pace of aggression at the front end of the yield curve, while working towards a terminal rate that could be higher than once thought. Though Powell may try to sound hawkish, and that could rattle markets, he will not have to do much heavy lifting. His minions were out and about on Monday.
At a virtual event hosted by the Economic Club of New York, New York Fed President John Williams sounded tough. He said, "Further tightening of monetary policy should help restore balance between demand and supply and bring inflation back to 2% over the next few years." Williams added, "My baseline view is that we're going to need to raise rates further from where we are today. I do think we're going to need to keep restrictive policies in place for some time. I would expect that to continue though -- at least though -- next year." Hmm. Super.
Elsewhere, speaking in a webcast interview with Barron's, St. Louis Fed President James Bullard mentioned that, "Labor markets continue to be extremely strong." and "We've got a ways to go to get restrictive." Bullard reiterated his Taylor Rule driven view that the FOMC needs to get the Fed Funds Rate, at a minimum up to the lower bound of a 5% to 7% range. For those unaware, the FFR currently stands at 3.75% to 4%. Futures trading in Chicago are currently pricing in a 70% probability of a 50 basis point rate hike in two weeks.

The stock of Gilead Sciences ( GILD) has been on the run of late. Gilead and Arcus Bioscience ( RCUS) revealed the fourth interim analysis from a clinical study of their lung cancer drug candidate "domvanalimab" versus standard treatment. The test includes two different dosages and both are preliminarily showing meaningful improvement compared to that standard.
The study is of 133 patients suffering with non-small cell lung cancer who have received the experimental treatment at least 13 weeks ago. The standard drug "zimberelimab" is an immunotherapy that blocks a protein used by cancer cells to hide from the immune system. Domvanalimab makes use of a new mechanism, binding a receptor that cancer cells use to avoid detection. Once the new drug locks on to that receptor, it frees the immune system to kill the cancer cells.
The goal of this new drug is to ultimately show a 50% overall response rate. The current standard of care runs at 35%. So far, the drug appears to be safe. Gilead and Arcus have moved an expected presentation of their data to December 20 from early 2023. 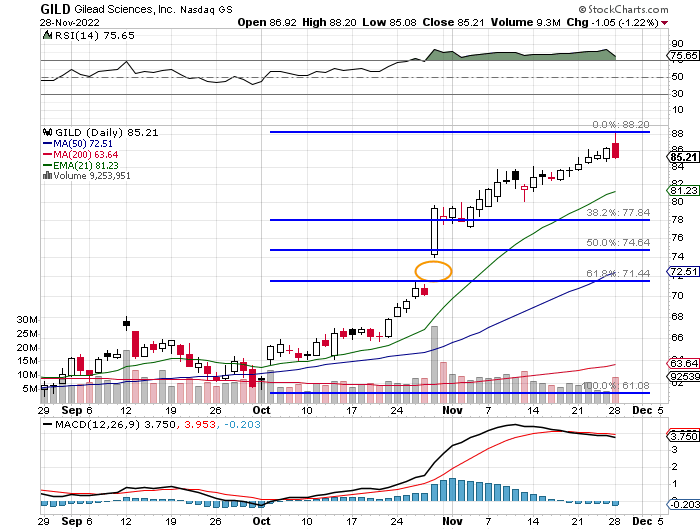 While I am rooting for this new drug's success with all my heart, I did get short GILD on Monday's spike for a trade. My average price is $87.05, and my target is $77 which would be a 38.2% Fibonacci retracement of the late September through late November run.
I do see that the 61.8% Fib retracement level would also fill the gap created in late October. I am just not sure I can stay short long enough to get there. I like to cover my shorts far more quickly than I do my longs and I know I want to be flat well before that December 20 event.

Disney ( DIS) CEO Bob Iger held his first "town hall" meeting with employees on Monday since returning to his role as the company's chief executive.
The company's hiring freeze remains in effect. No one expected anything different. Then he said the magic words. In response to a question regarding the challenges facing the company, Iger said that as far as its streaming businesses are concerned, making money will be prioritized over subscriber growth. The comment was: "We have to start chasing profitability, It will be demanded of us."
The stock closed at $95.69, down 3.22% for the day. Don't forget, Disney runs two theme parks in China. I read the comment last night as I did my homework.
I added to my DIS long just ahead of the 8 p.m. ET ARCA close, at $95.60. The comment on profitability was all I needed.