By STEPHEN GUILFOYLE Aug 09, 2022 | 07:35 AM EDT
Stocks quotes in this article: EMR, GFS, RL, SYY, RBLX, TTD, U, WYNN, NVDA, AMD, MRVL, XLRE, XLK, XLF, AMC, GME, BBBY, VRM, W, NVAX, LMND
Strange day. Monday. Felt to me like our equity markets took a beating.
Of course I did come in long Nvidia ( NVDA) , which was the epicenter of Monday's bearish turnaround after markets opened higher. I also came in long Advanced Micro Devices ( AMD) and Marvell Technology ( MRVL) , which were in the direct line of fire concerning any Nvidia provoked "pin action." Truth is, though, that once again, markets proved more resilient on Monday than maybe they felt. The morning rally that had seen the Nasdaq Composite up 1.6% and the S&P 500 up a full percentage point was toast by lunchtime.
Despite, or in spite of the bearish turn, the S&P 500, Nasdaq Composite and Dow Industrials all managed to close in the general vicinity of their respective unchanged marks. Smaller-caps did better than that. The Russell 2000 held on to a gain for the session of 1.01%, while both the S&P 400 and S&P 600 gained about five-eighths of once percent on Monday. Forgive my use of Spanish pieces of eight when possible in describing anything related to price discovery. Makes me feel like I have been around the block once or twice, which makes me happy.
The damage to the equity marketplace really came from two directions, and that damage was close to localized. Nvidia gave up 6.3% for the day after warning on current-quarter revenue and pre-releasing some financial information. This knocked the stuffing out of the semis that took tech lower.
Of the 11 S&P sector-select SPDR ETFs, seven managed to close in the green on Monday, led by the REITs ( XLRE) , while Technology ( XLK) finished in eleventh place. None of the 11 even moved by anything even very close to 1%. Tech gave up 0.85% as the Dow Jones U.S. Software Index backed up 0.52% and the Philadelphia Semiconductor Index surrendered 1.61%. Behind tech, the Financials ( XLF) placed tenth on the day, losing just 0.06% as the KBW Bank Index retreated 0.53% thanks to the ever-deepening inversion of the Treasury yield curve.
While stocks were giving back early morning gains, the U.S. 10-Year/2-Year yield spread did this:

In fact, on top of the fact that a majority of sectors shaded green for Monday and that no single sector, tech included (beyond the epicenter), took anything close to a horrific beating, market breadth was strong. Close to very strong. Winners beat losers by more than two to one at the NYSE and by a shade less than seven to four at the Nasdaq Market Site. Advancing volume took a commanding 68.3% share of composite NYSE-listed trade and a 64.6% share of composite Nasdaq-listed trading.
This is all very positive. I think. Or, I thought. Trading volume increased by a significant enough margin in aggregate on Monday from Friday for names listed at both of New York's primary exchanges, suggesting strength in the marketplace, even taking what happened to the semis and to a lesser degree to the banks into consideration.
Does the increased trading volume on very solid breadth support Monday as a positive? Hard to say. Trading volume attributable to the S&P 500 increased slightly day over day, but remained very light. Trading volume was a bit heavier for names subordinate to the Nasdaq Composite but there was nowhere near the level of activity experienced last week during the "up" days.
Trading volume attributable to AMC Entertainment ( AMC) finished 197% above that stock's 50-day trading volume simple moving average. The stock was up 8.03%. How about GameStop ( GME) or Bed Bath & Beyond ( BBBY) ? GME closed up 8.57% on trading volume that was 40% above that stock's 50-day trading volume SMA. BBBY closed up 39.83% on trading volume that was 838% above that stock's trading volume SMA.
See where I am going with this. There was significant trading volume on Monday in meme stocks and that trading volume was obviously skewed positive. How much did that impact overall breadth? Minty fresh? Or, significantly skewed by momentum traders as having nothing to do with the actual flow of capital? I day traded AMC myself on Monday though I neither started nor finished the day with an open position.

Do any of these "meme" stocks with elevated levels of short interest -- that are strong again in Tuesday morning pre-opening trade, and would also include the likes of Vroom ( VRM) or Wayfair ( W) --  have the ability to come to market with (sell) a secondary equity offering at better-than-expected prices?
Can or will any of these names strike while the iron is hot, so to speak? If not, explain.

On Monday morning, Nvidia stunned shareholders by pre-announcing much weaker-than-expected revenue generation for the quarter ended July 31. Nvidia still reports on August 24. For the reporting period, preliminary data shows that the firm drove $6.7B in revenue versus consensus view for $8.1B, while adjusted gross margin is estimated to have landed at 46.1% versus expectations for 67.1%.
The company published a press release that largely blamed weakness in gaming as the primary culprit and explained that it had to cut prices in order to keep inventory moving. This weakness in gaming is persisting into the current quarter.
Though gaming was exceptionally weak, the weakness was not experienced in gaming alone. These preliminary results show that even the data center, which is my basis for also being in AMD and MRVL, while producing a record quarter, did not meet expectations. In fact, of Nvidia's five segments, only Automotive, which is not significant relative to gaming and the data center as a driver, outperformed its specific expectations.
The only real bright spots were the fact that Nvidia expects to continue to repurchase stock as it does not see a problem in generating cash, that the company has apparently slowed growth in expenses and that, according to the CFO, the company's margin profile remains intact over the longer-term. 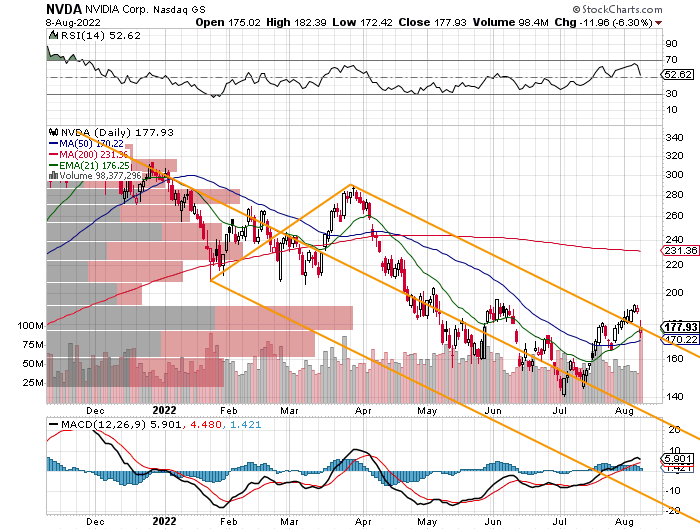 Readers will see that NVDA gapped lower on Monday morning, literally landing precisely on top of both the upper trend line of our Pitchfork model that goes back to November as well as the stock's 21-day EMA. Relative Strength returned to a "neutral" reading and the daily Moving Average Convergence Divergence (MACD) experienced a bearish curl (but no crossover) by the 12-day EMA.
Nvidia has done well for us this summer. Below, readers will also see an unfilled gap created on Monday spanning from $187 down to $182. So, while we, as traders, might have sold and repurchased NVDA on the news trying to extract some capital, where is it that we actually hit the panic button? 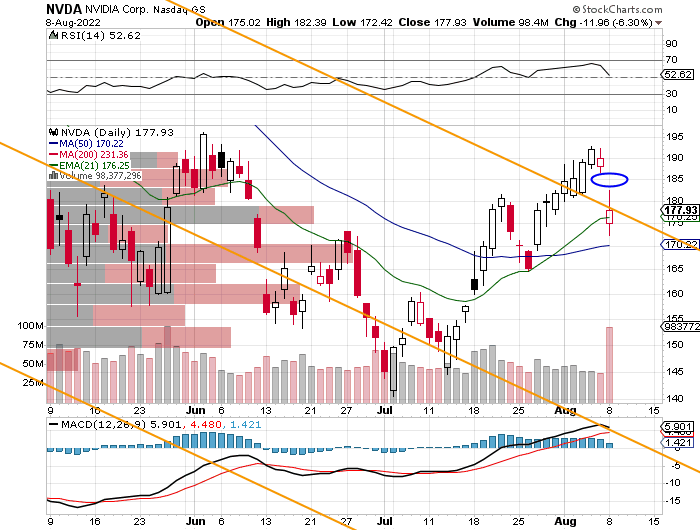 For me, that line is now the 50-day SMA ($170). As I know that other portfolio managers will be compelled by those that they must answer to, to reduce exposure once the stock loses that level and fails to force a quick retest, I know that I must reduce there as well. Hopefully, I can be a little quicker on the out (and on the in) as I am my own risk manager, so there is less conversation.
Remember, as much as we love NVDA and CEO Jensen Huang, the stock trades at 38 times forward earnings. NVDA is not a cheap date. Both AMD and MRVL trade at a far more comfortable 22/23 times and we have already heard from AMD this quarter.

Novavax ( NVAX) posted a GAAP loss of $6.53 per share on revenue of $185.93M. The revenue number was "good" enough for year-over-year "growth" of -37.6% and missed expectations by more than $834M (not a misprint). In addition, the company took full-year 2022 revenue guidance down to $2B to $2.3B from its prior outlook of $4B to $5B. The stock was down 5% on Monday ahead of these numbers (Why did NVAX not warn?), and is down another 31% overnight.
Lemonade ( LMND) posted a GAAP loss of $1.10 per share on revenue of $50M. Both top- and bottom-line results did beat Wall Street expectations, and the revenue number, small as it is, was good enough for annual growth of 77.3%. The company is growing and did take revenue guidance for both the current quarter full year above consensus.
LMND stock ran 12% last night after trading 4% higher during the regular session on Monday, despite the fact that the name is still not expected to be profitable any year soon. I took a rental short position close to the top of the overnight highs ($28.63). This is just a trade. I fully intend to cover this position, win or lose, on Tuesday. I do not stay short names where 32% of the entire float is held in short positions. That's how traders get smushed. See the Minty Fresh segment above.