Have the markets "hammered" out a low?

While the major equity indexes closed mostly lower Monday, there were multiple "hammer" candlestick chart patterns created that imply the recent notable five-session correction may have been completed. The bulk of the charts closed near their intraday highs after recovering from significant intraday lows. These "hammer" formations, in our experience, have a high probability of denoting a washout of sellers at the end of a steep downtrend as has been recently experienced.

The market data has yet to turn green, remaining largely neutral, but we are shifting our near-term macro-outlook for equities to "positive" from "neutral/positive" with the understanding that Monday's lows could be retested at some point. 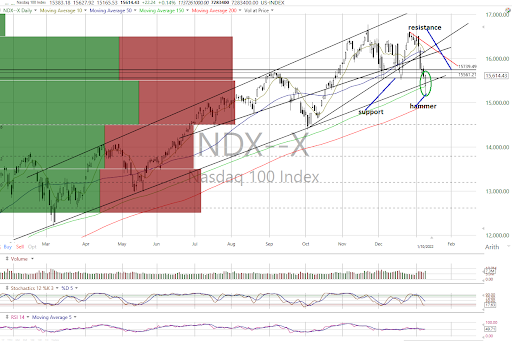 The major equity indexes closed mostly lower Monday, on heavy volume, except for the Nasdaq Composite and Nasdaq 100 (see above), which managed to post gains.

While the Dow Jones Transports, Russell 2000 and Value Line Arithmetic Index closed below their support levels, the rest of the charts gave very encouraging signs, in our opinion, that the recent market correction has a high probability of being completed. Indeed, all but the Dow Transports and Russell formed "hammer" patterns.

These patterns appear at the end of a downtrend when, on heavy volume, as seen Monday, a chart opens, trades significantly lower intraday but manages to close at or near the highs of the day. Such patterns typically are seen at correction lows as they suggest the selling panic was completed as supply was finally depleted to the point that demand was able to take control.

Market breadth was unchanged with the cumulative advance/decline lines for the All Exchange and Nasdaq negative and the NYSE neutral.

No stochastic signals were generated. However, the Nasdaq Composite and Nasdaq 100 are very close to registering bullish crossover signals.

The percentage of S&P 500 issues trading above their 50-day moving averages dipped to 60% and remains neutral as the Open Insider Buy/Sell Ratio is unchanged at 36.8.

While the data continue to send a generally neutral forecast and cumulative market breadth remains poor, the significant shift of demand overtaking supply Monday after a steep decline as seen by the hammer formations, suggests we change to a "positive" near-term macro-outlook for equities.

As Bears Pound the Bulls, 2 Indicators Strongly Suggest Relief Is on the Way

They are extremely oversold and at levels coincident with notable market rallies over the past year.