How much damage was inflicted by the Federal Reserve Wednesday? You may be surprised by the answer.

The major equity indexes cratered after the Fed rate decision and press conference, However, the McClellan 1-day OB/OS Oscillators that were very overbought, and sending warning signals, were cut in half as of Thursday morning. In our view, that weakens its prior very cautionary signals.

So, while investor sentiment (contrarian indicator) is extremely bearish, we continue to believe buying weakness near support is appropriate.

Now, let's take a close look at the charts and data.

Most Indexes Near-Term Bullish Despite Slide 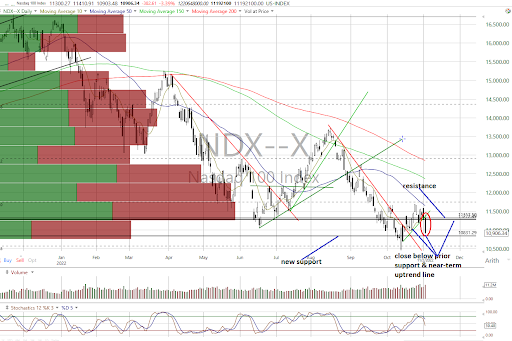 On the charts, the major equity indexes closed lower Wednesday with broadly negative internals on the NYSE and Nasdaq on heavy volume as selling intensified after Fed Chair Powell's news conference.

All closed at or near their intraday lows with multiple negative chart events generated.

Market cumulative breadth weakened as well with the advance/decline lines for the All Exchange, NYSE and Nasdaq turning neutral from bullish.

Bearish stochastic crossovers were registered on the S&P 500, Dow Jones Transports and Russell 2000, adding to the deterioration.

The McClellan Overbought/Oversold Oscillators that were deeply overbought and sending cautionary signals suggesting consolidation, were cut in half as a result of the notable weakness Wednesday. In our opinion, that lessens the potentially negative pressure in the very near term. Only the NYSE OB/OS remains overbought with the All Exchange mildly so while the Nasdaq is back in neutral territory (All Exchange: +50.59 NYSE: +63.97 Nasdaq: +42.331).

Wednesday's carnage left some stripes on the index charts. However, as most charts remain in uptrends with lighter OB/OS levels, we believe buying weakness near support remains appropriate.

Get an email alert each time I write an article for Real Money. Click the "+Follow" next to my byline to this article.
TAGS: Federal Reserve | Indexes | Markets | Stocks | Technical Analysis | Trading | Treasury Bonds | U.S. Equity