What may be of greatest importance right now, however, is the fact that Wednesday's gains still find "the crowd" at extreme levels of fear. The detrended Rydex ratio (see below) that forecasted yesterday's gains still finds the ETF traders very heavily leveraged short.

What Happened on the Charts?

All the major equity indexes closed higher Wednesday with positive internals on the NYSE and Nasdaq on higher trading volumes.

The sizable gains moved every index except the Russell 2000 above resistance while all but the Nasdaq 100 closed above their near-term downtrend lines.

As such, every index is now in a neutral sideways trend except the Nasdaq 100, which is negative.

Cumulative breadth finally improved as well with the A/Ds for the All Exchange, NYSE and Nasdaq turning neutral from negative.

What's more, every index generated a bullish stochastic crossover signal with the exception of the Dow Transports, which did so in mid-April.

What we believe may be the most important data factor for the near-term is the detrended Rydex Ratio (contrarian indicator; see below), which remains very bullish at -2.41. While dipping slightly, it still finds this contrarian indicator with the leveraged ETF traders highly leveraged short. We repeat, the insider/Rydex dynamic at these levels has frequently resulted in powerful market rallies like the one achieved Wednesday. 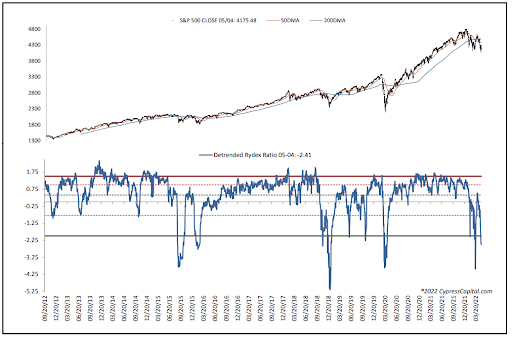 Meanwhile, this week's AAII Bear/Bull Ratio (contrarian indicator) rose further to a very bullish 2.97 and at a 20-year peak matched only by the 2008-2009 financial crisis. Crowd fear is at very extreme levels.

While some backing and filling of Wednesday's moves is likely, we now have a greater degree of confidence that the recent correction has likely been exhausted. Our suggestion of doing some nibbling in stocks two days ago remains intact with the caveat that it would be best to buy on weakness.