All major equity indexes closed at or near their intraday highs Tuesday, resulting in four of the index charts closing above their resistance levels. As such, all but one remain in near-term bullish trends as does cumulative market breadth.

However, some of the data discussed below is starting to suggest the recent market strength may be shifting toward some degree of weakness that, in our view, would be a normal consolidation if the recent rally gains.

All of this suggest to us we exercise some patience at current levels as some better buying opportunities may now be forthcoming. 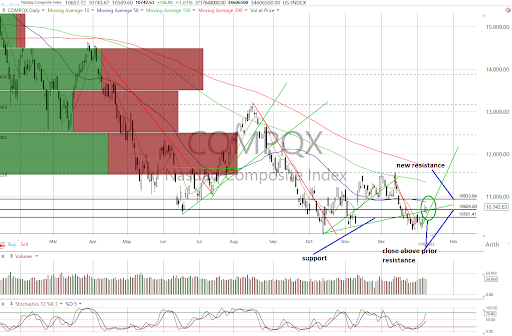 On the charts, all the major equity indexes closed higher Tuesday with positive NYSE and Nasdaq internals on lighter volume as the recent rally continued.

The close found all at or near their highs of the session with the Nasdaq Composite (see above), MidCap 400, Russell 2000 and Value Line Arithmetic Index closing above their resistance levels.

Regarding near-term trends, all remain bullish except for the Nasdaq 100 (QQQ) staying neutral. Also, the Dow Jones Transports closed above its 200-day moving average.

Cumulative market breadth strengthened further with the All Exchange, NYSE and Nasdaq advance/decline lines bullish and above their 50 DMAs.

The only fly in the ointment are the stochastic levels that are now overbought on all but two. Yet, they have not triggered bearish crossover signals thus far.

On the data front, some clouds are starting to appear, in our opinion, that suggest chasing the current rally may not be prudent.

The McClellan OB/OS Oscillators remain in overbought with the NYSE very overbought (All Exchange: +98.88 NYSE: +106.97 Nasdaq: +93.03). They suggest some consolidation as becoming more likely over the near term.

The Open Insider Buy/Sell Ratio remains neutral as it slipped to 26.5 from 40.7%as they stepped back from the buying window.

The detrended Rydex Ratio (contrarian indicator) rose further to -1.58 as the leveraged ETF traders did some further short-covering. However, it remains on a bullish signal and a potential upside catalyst, in our opinion.

This week's AAII Bear/Bull Ratio (contrarian indicator), below, moved higher to 2.11 as bearish sentiment increased and on a very bullish signal. 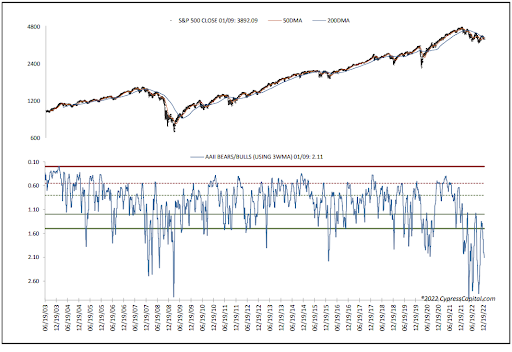 The Investors Intelligence Bear/Bull Ratio (contrary indicator page 8) is bullish at 33.81/36.6 as the number of bears rose and bulls declined.

The forward 12-month consensus earnings estimate from Bloomberg for the S&P 500 dipped to $227.34 per share. As such, its forward P/E multiple is 17.2x and remains at a premium to the "rule of 20" ballpark fair value of 16.2x as the spread widened.

While the charts and breadth remain positive, some of the data suggest a slight tempering of enthusiasm as to possible consolidation leading to better buying levels.

The S&P's Forward Valuation Remains Stretched as Insiders Lighten Up