After a mostly weak day and close for the major equity indexes,  the charts are generally positive while the data is a bit mixed.

Most of the 1-day McClellan OB/OS Oscillators are back in neutral territory after being overbought, which suggested a likely pause after the recent sizable market rally. Some further consolidation of recent gains would not be unusual.

Meanwhile, one contrarian indicator is bullish as the crowd continues to be nervous about embracing recent market strength. 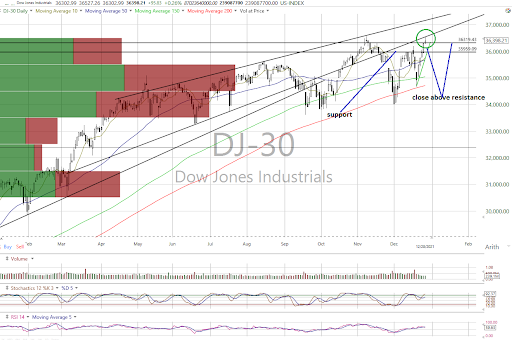 The indexes closed mostly lower Tuesday with the exceptions of the DJIA (see above) and Dow Jones Transports, which posted gains. In fact, the DJIA managed to close above its near-term resistance level.

Internals were negative on the NYSE and Nasdaq as trading volumes declined from the prior session. Yet, despite the weak session, none of the indexes saw violations of trend or support levels, leaving all but the Dow Transports in near-term positive trends.

While the day's internals were weak, they did not impact the cumulative advance/decline lines for the All Exchange, NYSE and Nasdaq, which remain positive but below their 50 DMAs.

All the stochastic levels are overbought but have not yet generated bearish crossover signals.

The McClellan 1-Day Overbought/Oversold Oscillators dropped back to neutral from overbought on the All Exchange and Nasdaq while the NYSE's remains overbought (All Exchange: +45.53 NYSE: +63.76 Nasdaq: +26.02). Their prior overbought condition suggested the potential for some pause in the markets.

The percentage of S&P 500 issues trading above their 50-day moving averages rose to 69% and remains neutral.

The detrended Rydex Ratio (contrarian indicator), measuring the action of the leveraged ETF traders, was unchanged and remains bearish at 1.09.

This week's contrarian AAII Bear/Bull Ratio dipped to 1.23 but remains bullish as the crowd remains nervous and unwilling to embrace recent market strength. But the Investors Intelligence Bear/Bull Ratio (24.4/55.0) (contrary indicator) did a total flip flop from the prior week as bulls now outweigh bears yet remains neutral.

The forward 12-month consensus earnings estimate for the S&P 500 from Bloomberg has dipped slightly to $216.14 per share. Therefore, the S&P's forward P/E multiple has moved up to 22.1x with the "rule of 20" still finding fair value at approximately 18.5x.

We remain "neutral/positive" in our near-term macro-outlook for equities while the charts and data suggest some potential remains for further consolidation of the recent market rally. We view such consolidation as not unusual and likely healthy for the longer term.