Despite indications early Tuesday for a market rebound from Monday's selloff, it is our opinion that the bounce, should it hold, would now be within negative trends that lack bottoming signals at this point. Thus, we suspect said bounce may be prone to failure.

As such, we are shifting our near-term macro-outlook for equities from  to "neutral/negative" from "neutral/" as Monday's weakness may prove to be the initiation of further weakness over the intermediate term. 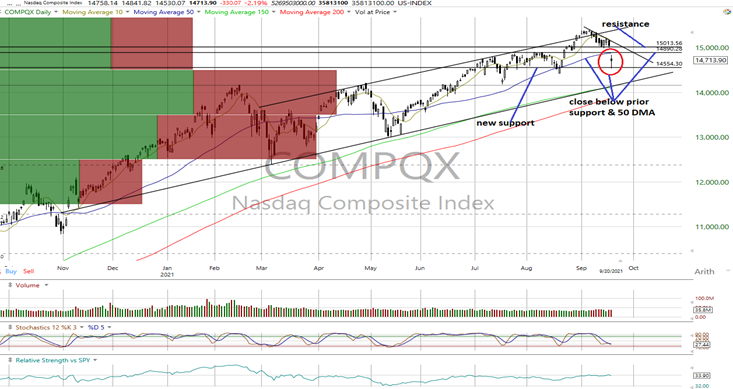 All the major equity indexes closed lower with negative internals on the NYSE and Nasdaq.

While closing above their intraday lows, they, nonetheless, all closed below support and their 50-day moving averages, including the Nasdaq Composite (see above), Nasdaq 100  and Dow Jones Transports, which are now negative as are the rest.

Market breadth, which was already negative, weakened further for the All Exchange, NYSE and Nasdaq cumulative A/Ds, leaving them in downtrends.

We would note the Nasdaq A/D chart (see below) shows the occurrence of market corrections when breadth was negative as the index advanced, as is now the case.

The Nasdaq cumulative advance/decline line is negative and below its 50 DMA. 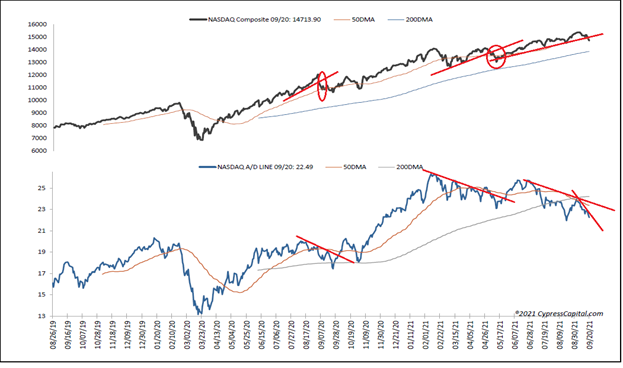 The data finds the McClellan 1-Day Overbought/Oversold Oscillators oversold on the All Exchange and NYSE with the Nasdaq neutral (All Exchange: -60.83 NYSE: -76.7 Nasdaq: -49.5). They imply a short-term bounce.

The Rydex Ratio (contrarian indicator), measuring the action of the leveraged ETF traders, lifted to 1.11 and still finds the ETF traders leveraged long and on a bearish signal.

The Open Insider Buy/Sell Ratio was unchanged to 37.8 and remains neutral.

The 10-year Treasury yield rose to 1.31% and remains within its current trading range with resistance at 1.4% and support at 1.23%.

While early action Tuesday indicates relief from Monday's pain that may test new resistance levels, the charts, market breadth and data suggest Monday may have been the beginning of a correction that has further to go. Thus, we are now near-term "neutral/negative" in our macro-outlook versus our prior "neutral" opinion.