The pause/retracement of recent gains we have been expecting has not appeared yet as market strength has continued over the past few sessions. Indeed, all the major equity indexes closed Tuesday at or near their intraday highs and above their respective resistance levels at the session's end.

Yet, while the rally continued, the data are starting to send some mixed signals. The McClellan OB/OS Oscillators are now more overbought as some of the other encouraging data points have moderated. The data that were screaming that a buying opportunity was present at the market lows have now turned a bit more cautionary, suggesting a pause/consolidation of resent gains remains a probability.

Each closed near their highs of the day as every index managed to close above its near-term resistance level. As such, the strength left all the indexes in near-term uptrends and above their 50-day moving averages.

Market breadth was strong enough to push the cumulative advance/decline lines for the All Exchange, NSYE and Nasdaq back above their 50 DMAs and in uptrends.

Stochastic levels are overbought and in the 90s across the board but have yet to generate bearish crossover signals.

Data Signals Are Getting More Cautionary

The percentage of S&P 500 issues trading above their 50-day moving averages (contrarian indicator) rose to 72% and remains neutral but approaching the 75%-80% cautionary levels.

The detrended Rydex Ratio (contrarian indicator) dropped to -0.72 and is now neutral versus its prior bullish implications. 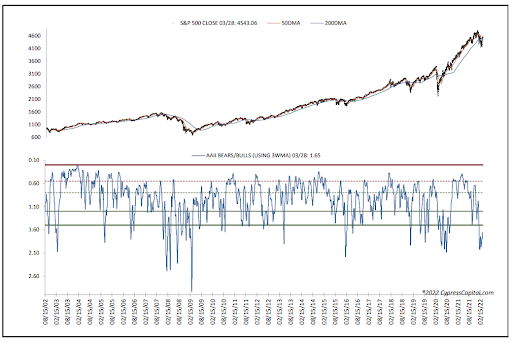 The Investors Intelligence Bear/Bull Ratio (contrary indicator; see below) is at 35.31/36.3, near peak fear levels seen four times over the past decade, each of which was also followed by a notable rally such as the one currently in play. The crowd remains fearful despite recent strength.

The forward 12-month consensus earnings estimate from Bloomberg for the S&P 500 is now $227.98 per share. As such, the S&P's forward P/E multiple rose to 20.3x with the "rule of 20" finding ballpark fair value dipping to 17.6x as the valuation gap widened further.

The markets have yet to show a slowing/pause of the recent rally despite the cautionary signals coming from the data. As bearish investor sentiment remains a positive, the data still imply some consolidation of the recent sizable gains from their mid-March lows, in our opinion.