First, equity markets opened on strength. We expected that. Then, the sell programs kicked in, and then traders sold some more. Everything seemed to be going the way we had laid things out early on Monday morning. Then, markets rallied into the close. Yes, that can be quite common.

This time, the action strayed from the plan. Not the first time. Certainly won't be the last. You know what they say: "Everyone has a plan until making first contact." That old military adage was once adopted by heavyweight boxer Mike Tyson. It works here, too.

What markets gave us on Monday appears as generally green, yet inconsistent. Small-to mid-caps and transports led the marketplace, suggestive of better growth than we have been talking about. While welcome if believable, and there has been some selling out on the longer end of the U.S. Treasury curve overnight, I'll reserve a place up front for my skepticism. The expansion in yield spreads would, in fact, be quite welcome if indeed provoked more by economic activity than by consumer-level inflation. I may be the last holdout here, but I still see much of the inflationary pain felt by U.S. consumers in 2021 as for the most part confined to pockets that might be labeled as "pandemic driven."

In other words, despite the justified cries of consumers, and the snarky howls of both financial media pundits and economists who know better, at least a large enough portion of the inflation felt has indeed been transitory in nature. Does this mean that none of the inflation experienced will become structural? Of course not. It means that certain areas where supply chains have become constricted might remain so for as long as populations living and working in global manufacturing hubs require a reduction in human interaction as a means of controlling infection rates. This is not rocket science.

That said, market breadth was "minty fresh" ahead of the Bureau of Labor Statistics' release of August CPI data for the U.S. on Tuesday morning, not to mention also ahead of the big Apple (AAPL) launch event later on today.

Both the S&P 500 and Dow Industrials put an end to five-day losing streaks Monday. It should be noted that even with the DJIA taking back 262 points, or 0.8%, the blue chip index still failed to retake both the 21-day exponential moving average (EMA) and 50-day simple moving average (SMA), closing below both of those key moving averages for a third consecutive day. The S&P 500, by the same token, only took back 10 points or 0.2%, also failing to retake it's 21-day EMA, closing below that line for a second session.

Cyclicals held an advantage over more defensive sectors on Monday. Using Select Sector SPDR ETFs as proxies, Energy (XLE) was a runaway winner as many refineries in the Gulf of Mexico had still not reopened in full following Hurricane Ida, and then along came Nicholas. WTI Crude spent the entire day trading above $70 per barrel, while front-month Natural Gas futures traded at seven year highs.

Financials (XLF) rallied as well, led by the banks as yields worked their way ever so slightly higher. One must understand that if the U.S. 10-Year Note pays 1.34% after giving up 1.17% two months back, that in the grand scheme of things, small upward movements in nominal yields are nearly meaningless with year-over-year CPI growth that has gone from 2.6% in the spring to 5.4% most recently. Real Rates have gone lower. Much lower. That's why the whole transitory/structural debate is so very important. If the Fed really wants to get on its horse and move the debate rapidly from tapering to targeting short-term interest rates, they have to be able to demonstrate that inflation is not only transitory, but is either peaking or has already reached an apex.

The New York Fed released its August Survey of Consumer Expectations on Monday. This could be problematic. One key component in the evolution of inflation from something that could be or even should be transitory is expectations. Many believe that a key factor in sustained volatility in pricing at the point of sale is the belief that prices will move. Sort of a self-fulfilling prophecy type of condition. Von Mises would have labeled it under his "Human Action" thesis.

According to the survey, consumers now expect to see inflation of 5.2% one year from now, and 4% three years from now. These expectations are up from 4.9% and 3.7%, respectively, for the July survey. Consumers see above-trend inflation for food prices, rent, and medical costs. In short, consumers in the U.S. are seeing more difficulty going forward in providing sustenance and shelter for their families. The average American, my friends, is losing hope. The things they see becoming all the more difficult to afford are the very things they need the most, where the demand will be the least elastic.

At a time when there are more job openings than individuals seeking jobs? Well, we still need to see the impact of millions tossed off of federal "payrolls" last week upon participation. That is an early October, early November story. The Fed really cannot act with any certainty at all until they see that data, which means they will (in my opinion) only pave the road next week.

No matter where you are on the structural/transitory spectrum of perception, the comments made by 3M (MMM) CFO Monish Patolawala on Monday had to have knocked your socks off. Patolawala mentioned semiconductor chip issues, but also mentioned rising input costs for resins, polypropylene, wood pulp, and labor as having outpaced the company's ability to raise prices.

Now, this is 3M. Multiply that across the economy, and it stands to reason that many large industrials would be feeling some of the same pressures. Now, think about the small-to mid-sized manufacturers which cannot buy in bulk the way 3M can, and address only a local or regional market. Not good.

FYI, 3M increased its expectation for the negative impact of this inflation to full-year EPS to the high end of a $0.65 to $0.80 range. The company first made mention of that range in July, which was up from prior guidance of $0.30 to $0.50. That's a nasty chunk out of full-year EPS that was at one time expected to approach $10. Wall Street is around $8.85 on this metric, right now and for the most part, seemed somewhat relieved that what Patolawala told us on Monday wasn't worse.

Background. The Biden administration had gotten ahead of regulators in stating its intention to start offering third jabs or "booster shots" of the two messenger RNA Covid vaccines available in the U.S. to the general public as soon as September 20, at first eight months after the second jab, but the timeline had come under debate. That's less than a week away. To be clear where my bias is, I am not being critical of the president nor the administration here. I am trying to view this through the prism of both the individual who had a real lousy time with Covid and would eagerly line up for a booster, but also as an investor who remains long both Pfizer (PFE) and Moderna (MRNA) .

Monday. A group of scientists, including Philip Krause and Marlon Gruber, both of whom recently retired from the FDA, published a piece in the highly esteemed medical journal "The Lancet" where an argument is made that the evidence does not yet justify offering "boosters" to the general public. Quoting from The Lancet: "The limited supply of these vaccines will save the most lives if made available to people who are at appreciable risk of serious disease and have not yet received any vaccine. Even if some gain can ultimately be obtained from boosting, it will not outweigh the benefits of providing initial protection to the unvaccinated."

Needless to say, Moderna, Pfizer and Pfizer's partner BioNTech (BNTX) have all built sales related to large contracts with developed economies to provide for huge revenue projections going into 2022 and beyond. Not that the idea of vaccinating the less-developed world first does anything to reduce demand, but it surely would damage revenue generation.

Moderna shares gave up 6.6% on Monday, while BioNTech backed up 6.3%. Both of those are less-diversified biotechs. Pfizer, a well-diversified member of what we call "Big Pharma," still suffered a 2.2% decline on Monday as sales of the firm's Covid vaccine were expected to account for up to 43% of the entire sales pie for the full year.

No, I have not sold these two names just yet. Obviously, I have huge tolerance for risk whereas Moderna is concerned, and Pfizer just is not all that volatile while dishing out a dividend that yields 270% of what the already mentioned 10-Year Note pays. Well off the recent highs, I still think this a good defensive name.

Long-time Sarge-fave Advanced Micro Devices (AMD) gave up a few dimes on Monday after closing more than $2 off of the stock's lows. Can't blame the group. The Philadelphia Semiconductor Index closed up nearly a full percent, while the Dow Jones U.S. Semiconductor Index gained 0.6% for the day.

AMD found support just above the stock's own 50-day SMA on Monday and holding that line would be critical at this point. 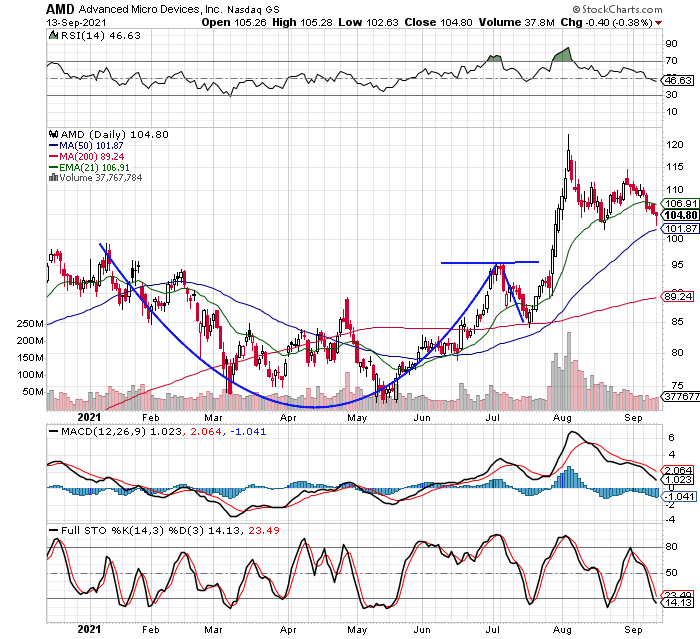 As readers can see, support kicked in close to $102 for the second time in less than a month, but this time, the level is more technical in nature. While the Relative Strength Index (RSI) is in "OK" shape, both the Full Stochastic Oscillator and the daily Moving Average Convergence Divergence (MACD) are clearly not.

What does that mean to me?

Simple. Almost 25 million shares worth of shorts were covered in August. The $122 peak early in the month as well as the $114 top toward month's end were almost certainly driven by short coverings. Those short sellers that did not panic on those squeezes are certainly not likely to panic with the shares showing recent weakness. I don't expect them to come to the rescue at this time.

I am still up a lot in AMD. That 50-day line is key. Should the shares make another attempt on that line, a line that they have not closed below since May, portfolio managers (OK, portfolio managers' algorithmic trading program providers) will be watching with itchy trigger fingers. So will I. If that line breaks, there is no reason in the world why the shares should not also test the 200-day SMA.

Own, don't trade? Only if that blue line doesn't crack.

Get an email alert each time I write an article for Real Money. Click the "+Follow" next to my byline to this article.
TAGS: Futures | Indexes | Markets | Trading | U.S. Equity

Even If You Don't Trade Copper, You Should Be Watching It

It isn't a coincidence that the copper market is teetering between feast or famine at the same time as the S&P 500.

Shark Bites: Ammo Is Firing on All Cylinders

So why is its chart so poor?

This Is a Nervous Market Right Now

The key is that the lows from yesterday do not come into play.

A Game Plan for a Deeper Market Selloff

The technical definition of a correction is a 10% decline from the highs. Let's imagine that scenario and how to play it.