By STEPHEN GUILFOYLE Nov 08, 2022 | 07:26 AM EST
Stocks quotes in this article: DD, GFS, PLNT, LCID, DIS, AAPL, XLC, SNAP, META, XLE, XLK
Tuesday. The second Tuesday of November. You made it to election day.
There may be a number of races that might take some time to figure out. One thing is certain, though. At least the political television ads will die down. For now.
Regardless of your political persuasion, if you even have one, depending on which way the wind blows, this could be a positive event for financial markets. Either way, the day will probably start out rather slow (as was Monday) and could get active later (or maybe even tomorrow) as rumors and exit polling start to impact levels of investor optimism.
Going into these midterm elections, the Senate is currently split 50/50 between Republicans and Democrats/Independents caucusing with Democrats. In a partisan vote, Democrats control the upper chamber of the U.S. legislature by virtue of the Vice President's tie-breaking vote. Estimates are that after the dust settles, the Senate will remain close to evenly split. Estimates currently show anything from a pick-up of one seat for the Democrats to a pick-up of two seats for the Republicans.
At this point, the House of Representatives is seen as having 35 seats as potentially "too close to call." The Republicans need to pick up five seats to take control of the lower chamber. Of those 35 seats that are seen as up for grabs, 25 are currently held by Democrats and 10 are currently held by Republicans.
We all know the history. There have been 22 midterm elections going back to the "Great Depression" era. Across those 22 elections, the party of the president has averaged a loss of 28 seats in the House and an average of four seats in the Senate. Are things different these days? Perhaps. Politics, and this is just my take, seem far more divisive than anything I remember. That probably leaves a smaller, in percentage terms, middle, so I think losses for the president's party could be fewer than the average. Then again, President Joe Biden is one of the least popular presidents two years into his first term, in modern history. That could increase those losses.
On top of all that, former President Donald Trump, who was also very unpopular two years in, but does drive a very loyal base, was making noise, without making any concrete announcements on Election Day Eve. Does that drive turnout -- on either side of the "aisle"?
The fact is that the markets have done well in the past in post-midterm election periods. The S&P 500 has put together a positive return for the 12-month period following a midterm election for 19 consecutive midterm elections. That's a pretty nice batting average. Then again, I'm not sure how many of these past midterm elections came after a pandemic-induced economic shutdown followed by immense fiscal and monetary stimulus that were then followed by a rapid tightening of policy in order to fight inflation? Actually, I am sure. The answer is none.
That said, history does show that financial markets tend to do better when at least one chamber of the legislature is controlled by the opposition party. Gridlock has tended over the years to outperform unified government.

Voters across the country today will get the chance today to consider at least $66B worth of proposals put forth by states and municipalities to finance various projects at what will be much higher borrowing costs than anything considered in any recent previous year. This is up "huge" from $27B last year and does not include referendums being held by utility and water districts in the state of Texas.
Even excluding those referendums, Texas, California and New York account for roughly $40B worth of that $66B total. If it costs money, I almost always vote "no" on these, as this only forces my state and local taxes to move even higher. Yet somehow, they always seem to pass.

Equity markets stutter-stepped out of the gate on Monday morning. The indexes did, however, hold near the closing levels from Friday's rally until around noon, when it appeared that the bulls took control. This was despite the fact that China had pivoted back toward a strict zero-Covid policy and related news concerning supplies of Apple's ( AAPL) latest high-end iPhones.
The real news for equities was really a story of U.S. dollar weakness and Treasury market strength. Treasuries rallied across the curve, as the all-important spread between the yields of the U.S. 10-Year Note and the U.S. 3-Month T-Bill have worked their way toward potentially un-inverting since late October.

In fact, that spread is currently, as I write this piece trading at +4 basis points. However, take that with a grain of salt as we have seen several attempts made at un-inverting that spread through the wee hours in recent days and so far those attempts have not survived through daylight hours.
Back to equities. All of your favorite averages put together a second straight nice day. The Philadelphia Semiconductor Index led the way, up 2.18%, as the S&P 500 gained 0.96% and the Nasdaq Composite gained 0.85%. Small-caps underperformed the broader marketplace, with the Russell 2000 up 0.55%.
Eight of the 11 S&P sector-select SPDR ETFs made upward progress for the session, with "growthy" types taking the lead. Communication Services ( XLC) placed first for the day with a gain of 1.79%. That sector was supported by the Dow Jones U.S. Internet Index (+2.7%) that in turn was buoyed by Snap Inc. ( SNAP) and Meta Platforms ( META) . Social media stocks all seemed to get a boost from a report in the Wall Street Journal that Meta would announce large-scale layoffs later this week. Beyond the internet, Energy ( XLE) placed second for the day, at +1.72%, while Technology ( XLK) took third, up 1.67%. Both software and semiconductor stocks did well in support of that group.
As far as breadth is concerned, winners beat losers by slightly less than two to one at the NYSE and by five to four at the Nasdaq Market Site. Advancing volume took a 58.7% share of composite NYSE-listed trade and a 57% share of that metric for Nasdaq listings. The thing is, and I mentioned it above, there just was not enough action on Monday to take a lot from the day's action. While there was a general feeling that price discovery seems to be front-running the election, as Real Money colleague James "Rev Shark" DePorre pointed out on Twitter, trading volume was amoebic. Aggregate NYSE-listed trade decreased 19.6% day over day from Friday, while aggregate Nasdaq-listed trade dropped 18.3% from Friday's levels. 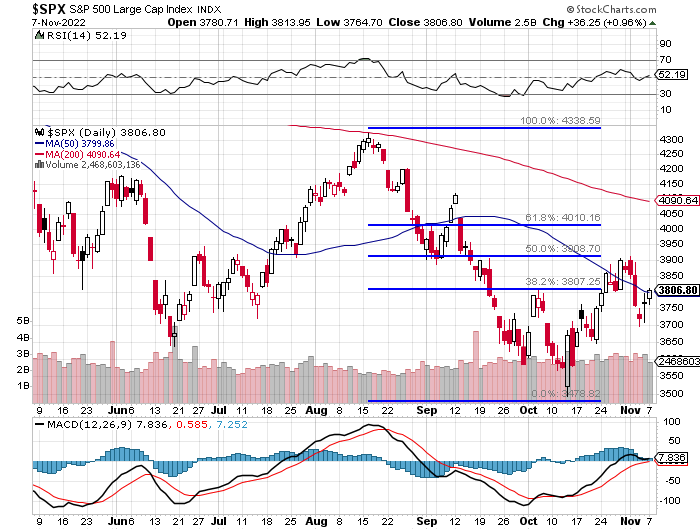 Readers will note that the S&P 500 (see chart above), after hitting stiff resistance in late October at the 50% retracement level of the early August through mid-October selloff, has now retaken both its 21-day exponential moving average (EMA) (after kissing that level on Friday) and more importantly, its 50-day simple moving average (SMA).
Holding that line through these election results would be nice, but the real test, even more so than these elections, will come on Thursday when October CPI data hits the tape. 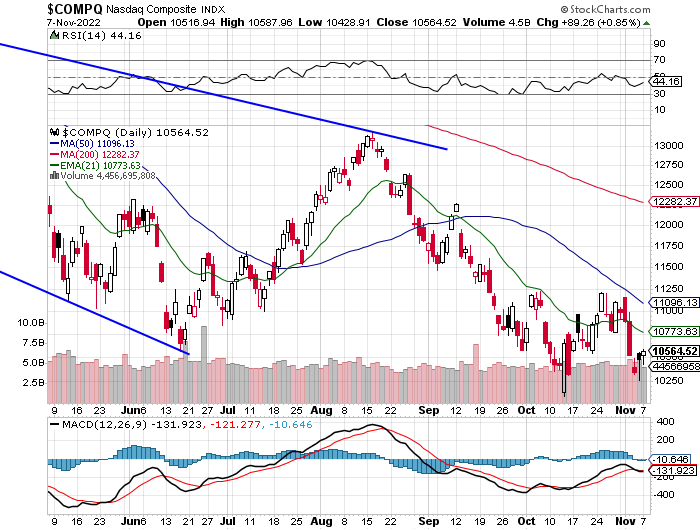 Meanwhile , the Nasdaq Composite, above, has lagged the S&P 500. This index has yet to retake any of its key moving averages. The Composite still needs a 2% gain in order to meet its 21-day EMA and more than a 5% run in order to touch its 50-day SMA.
Lost cause? Not exactly. Zooming out to take a longer look, below, we see that the Nasdaq Composite remains in that descending broadening wedge pattern that we have discussed in the past.
I would remind readers that roughly 80% of breakouts from broadening descending wedge patterns are to the upside. 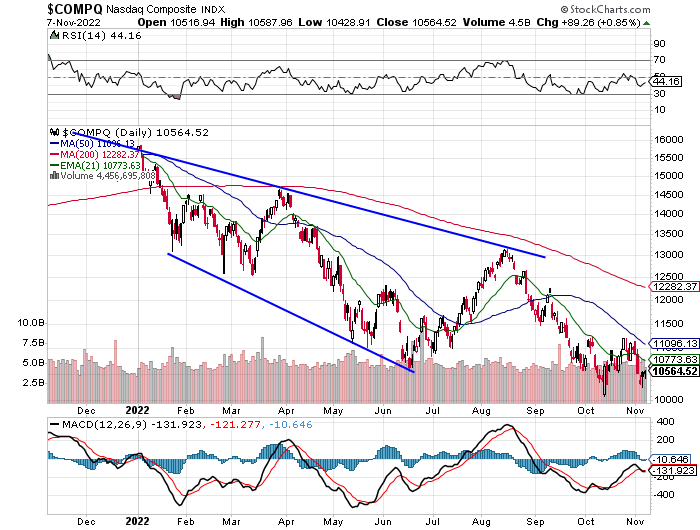 The fact is that the U.S. economy in 2023 will likely either go into a recession deeper and far more serious than the one experienced through the first half of 2022, especially if the FOMC cannot be patient with policy from here. That does not mean that the last two months of 2022 have to be ugly for equities, though. I would like to remind readers that seasonality is on the side of the bulls this time of year. The S&P 500 gained 8% in October. The magnitude of that gain may have surprised, but not the direction given the month's post-1980s history. October on average over the past 25 years, has been the S&P 500's best month.
The good news for equity investors is that over the past 25 years November has been positive 18 times, posting a median return of +1.91% and a mean return of +1.65% for that time span. December has been positive 19 times over the past 25 years, posting a median return of 1.12% and a mean return of 1.27%. Eight percent gains? No. Better than a sharp stick in the eye? You bet.

Finally. Disney ( DIS) day. The House of Mouse reports earnings tonight.
Wall Street looks for 48% earnings growth on 15% revenue growth.
What everyone cares about is streaming, though. Consensus is for an addition of almost 9M subscribers to Disney+, bringing the total up to 161M. When considering the entire Disney bundle, to include Hulu and ESPN+, the expectation is for 10.4M new subscribers to get the total number across all offerings to 231.5M subs.