I was reminded this week that we still live in an Either/Or Market. I haven't said much about it lately but we spent most of 2021 with the top five or 10 tech stocks basically controlling the indexes. It seemed as if money poured into those handful of stocks daily. And they did so at the expense of nearly every other stock.

We entered 2022 with these five mega-cap tech stocks comprising around 25% of the S&P 500. Earlier this week that was down to 21% and that was before Microsoft (MSFT) , Alphabet (GOOGL) and Meta (META) reported earnings. Now clearly Meta has fallen out of the top five but in the big picture for the stock market, relieving the dependency on five stocks is a good thing.

Here is the chart I showed you on the first day of 2022, with the same blue line, only what had transpired in 2022 had not yet occurred. At the time here's what I said:

"I would love to tell you that moving over the blue line is some magical number or level but it is not. However, if I am correct that the speculative peak was almost a year ago, this ratio ought to work its way higher over the coming months. Should that happen I think it would mean we would slowly extricate ourselves from that situation where a handful of stocks are the only thing the market indexes care about."

Wednesday's market saw breadth stay up and the big-cap S&P head south. Before you get too excited over this do note that breadth (blue line) is still under the early October high where the S&P (brown) is over it. So as good as breadth has been, it's not been the leader. 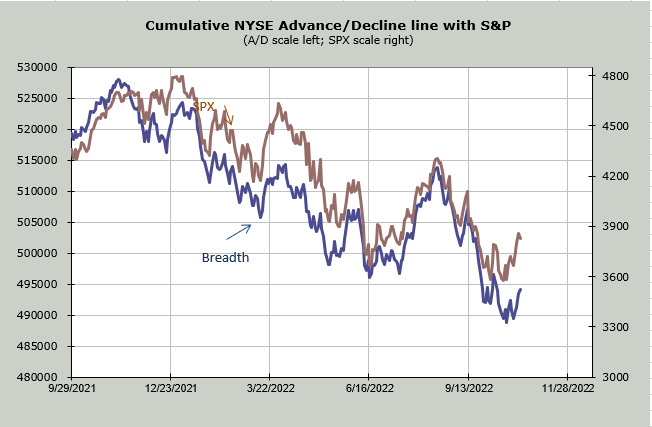 However, the number of stocks making new highs continues to expand. Nasdaq's new highs are now where they were last January. I do not like that the majority of them are SPACs but I did see a few small financials on the list. And some biotechs. That's new.

We are, however, overbought on a short-term basis now so no one should be surprised at a pullback. You can see the Oscillator is now pushing toward the top of the page. My estimation is that the market will be overbought sometime between Thursday and Monday.

On the sentiment front, as expected, the Investors Intelligence bulls moved up to 37%. Two weeks ago they were at 25%. The August high was 45% so here you can see we are seeing the conversion from bears to bulls moving swiftly. 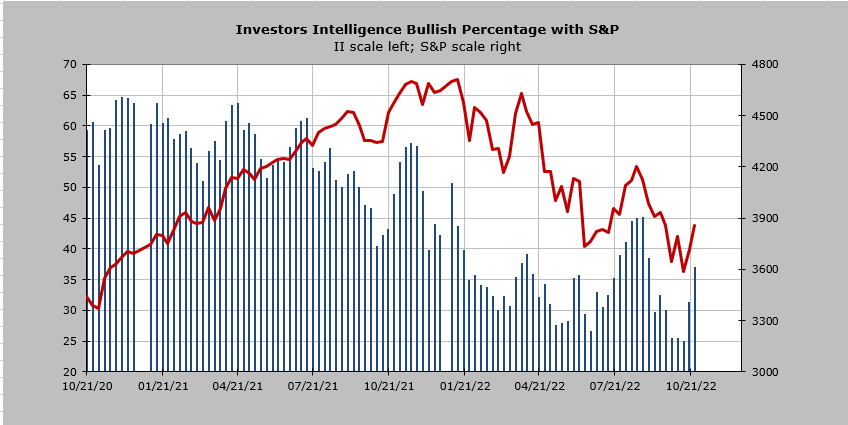 Even if we look at the 21-day moving average of the put/call ratio for ETFs you can see it is now under the August low (high in the market). That, too, is a sign of the conversion from bears to bulls. 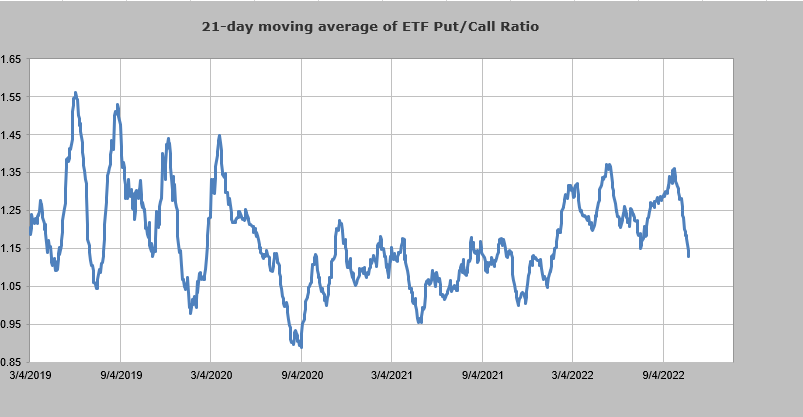 I do expect that a pullback will lead to another rally because the intermediate-term indicators are not overbought, but I will leave you with one final chart of the DJIA. I have been using this channel all year and as you can see the DJIA has just tagged the upper line. It's possible we will get an overshoot as we did in August but I think a dip and another rally would be more helpful for the chart.

Get an email alert each time I write an article for Real Money. Click the "+Follow" next to my byline to this article.
TAGS: Earnings | Indexes | Investing | Markets | Put Call | Technical Analysis | Trading | Technology | U.S. Equity

The Most Threatening Issue in the Market Right Now

Here's why I'm on the sidelines in terms of new buys for the near term.

The latest way to gamble on market direction has become 'zero days to expiration' options or what Wall Street now refers to as ODTE options.

After rapid gains since the start of November, the rally in Hong Kong and China stocks has come unstuck in February as U.S.-China tensions flare again.