The major equity indexes close mostly lower Thursday in response to the PPI report, two major indexes did post gains while all closed well above their intraday lows as buyers came in starting around midday.

We find it encouraging that the same action was seen Wednesday when hot CPI data was reported. In both cases, emotional selling occurred early in the session while the more "rational" players saw it as a buying opportunity with enough demand to lift prices well above their intraday lows.

Also, no violations of support were noted on a closing basis as every index chart remains near-term neutral. In fact, some are managing a series of higher lows, implying an increase in demand. The data remain generally neutral as well except for record levels of bearish sentiment while valuation appears appealing via the "rule of 20."

While violations of resistance have yet to appear, we believe some very selective buying may now be appropriate where individual charts are suggesting nascent phases of improvement. 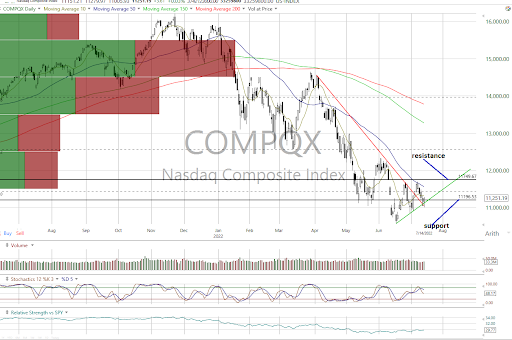 The major equity indexes closed mostly lower Thursday with negative internals on the NYSE and Nasdaq.

However, buyers came in to lift the market well off its lows with the Nasdaq Composite (see above) and Nasdaq 100 actually closing up on the day, making a series of higher lows on their daily charts.

Some violations of support occurred intraday, but all held at the close. Thus, the near-term chart trends remain neutral.

Cumulative market breadth did deteriorate enough to shift the cumulative advance/decline lines for the All Exchange, NYSE and Nasdaq to negative from neutral.

The detrended Rydex Ratio (contrarian indicator) was unchanged at -1.77 and remains bullish as the leveraged ETF traders continue their leveraged short exposure.

The Investors Intelligence Bear/Bull Ratio (contrary indicator) saw a drop in bulls and is very bullish at 40.3/30.5. Three times in the past decade, such readings have marked market lows, most followed by notable rallies.

The weak economic numbers reported over the past two days shook the tree notably at each session's start but saw notable recoveries by the close. The action may be the beginning of a shift in the supply/demand dynamic to a more positive tone. Nonetheless, we need violations of resistance on the charts to feel more confident in that regard.

Get an email alert each time I write an article for Real Money. Click the "+Follow" next to my byline to this article.
TAGS: Economic Data | Economy | Indexes | Markets | Stocks | Technical Analysis | Trading | Treasury Bonds | U.S. Equity