Our column Friday morning expressed the need for the major equity indexes to hold important support levels. Very shortly thereafter, the Wall Street Journal released an article about an important shift in perception regarding projected rate hikes by the Fed, suggesting a "pause" in hikes after the expected rate hike in November. It was up from there.

All the indexes closed higher with positive internals on the NYSE and Nasdaq as volumes rose from the prior session. All closed at or near their intraday highs with two indexes closing above resistance, thus turning their near-term trends to bullish from neutral. In our opinion, the clouds that had been hanging over the charts are continuing to dissipate.

Regarding the data, it is generally neutral except for investor sentiment (contrarian indicator) that still finds the crowd at peak levels of bearish expectations with the leveraged ETF traders extremely leveraged short. We believe this sentiment presents a potentially strong catalyst for further strength.

So, while forward earnings estimates continue to slip, we continue to believe market weakness should now be bought. 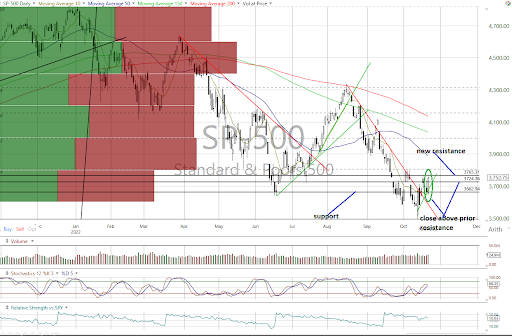 On the charts, all the major equity indexes closed higher Friday with positive NYSE and Nasdaq internals on higher trading volume.

All closed near their highs of the day with the S&P 500 (see above) and DJIA closing above resistance and turning their near-term trends to bullish from neutral. The rest of the charts remain neutral.

Cumulative market breadth is neutral s well for the All Exchange, NYSE and Nasdaq advance/decline lines.

The percentage of S&P 500 issues trading above their 50-day moving averages (contrarian indicator) rose to 28%, turning neutral from bullish.

The detrended Rydex Ratio, (contrarian indicator), continues its extremely bullish signal as it rose to -3.38. The ETF traders continue to have historically leveraged short exposure, coincident with market lows, and with Friday's action create the probability of becoming a bullish catalyst when they are forced to cover, in our opinion.

Last week's AAII Bear/Bull Ratio (contrarian indicator) dipped to 2.67 and remained at a level of bearish sentiment only surpassed twice in the past two decades, those times being during the banking crisis in 2009 and the Covid pandemic in 2020.

The forward 12-month consensus earnings estimate from Bloomberg for the S&P 500, dropped to $229.25 per share. It has been steadily declining over the past several sessions. As such,  the S&P's forward P/E multiple is 16.4s and at a premium to the "rule of 20" ballpark fair value of 15.8x.

Friday's response to a perceived moderation in Fed policy left the charts and data suggesting market weakness should be bought.