Despite the market's recent path, it continues to send some strong positive signals, particularly in regard to investor sentiment. What's more, the forward 12-month P/E for the S&P 500 is now at ballpark fair value after having traded at a premium since June 2020.

Still, while the data is in the green zone, the charts have yet to alter their downtrends or violate resistance that we view as a requirement to be more positive in our near-term outlook while long term investors, in our view, could do some selective buying.

Let's take a look at the index charts and market data. 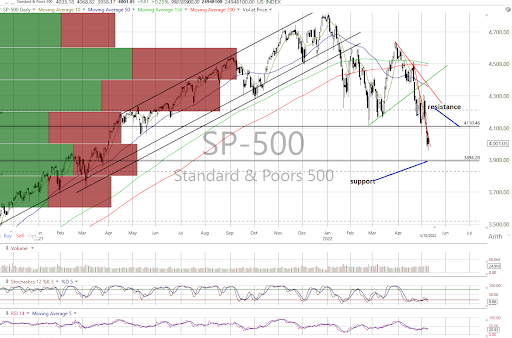 Internals were mostly negative for the NYSE and Nasdaq except for the Nasdaq showing positive up/down volume. However, as all closed near the midpoint of the session, no technical improvements were registered, leaving all in near-term negative trends and below their 50-day moving averages.

Cumulative market breadth remains negative on the All Exchange, NYSE and Nasdaq while the oversold stochastic levels on the charts have yet to initiate bullish crossover signals.

The Data Continue to Send Some Very Bullish Signals

The percentage of S&P 500 issues trading above their 50-day moving averages (contrarian indicator) dropped to 17% and is on a bullish signal and at its lowest level in two years.

We reiterate the most encouraging data factor for the near-term, in our view, remains the sentiment data.

The detrended Rydex Ratio (contrarian indicator) remains very bullish at -2.23. As its chart below shows, only five times in the past decade have the ETF traders been so heavily leveraged short, all of which were followed by rallies. 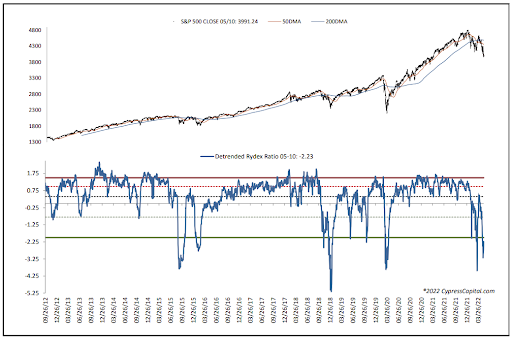 Meanwhile, this week's AAII Bear/Bull Ratio (contrarian indicator) is at a very bullish 2.75 and at a 20-year peak matched only by the 2008-2009 financial crisis as investment banks collapsed.

Also, the Investors Intelligence Bear/Bull Ratio (contrary indicator) is on a very bullish signal and at a decade peak of fear at 39.3/30.9. Crowd fear is at very extreme levels.

While the data are suggesting a positive turn in market action, the charts have yet to get in line. In our opinion, chart and breadth improvement are necessary to become more optimistic.

Get an email alert each time I write an article for Real Money. Click the "+Follow" next to my byline to this article.
TAGS: Indexes | Investing | Markets | Technical Analysis | Treasury Bonds | U.S. Equity