The question of the day will be whether or not the indexes can rebound substantially from the open. If not, it would imply further weakness.

Meanwhile, cumulative breadth has weakened to neutral from bullish while market sentiment remains at historically highs levels of bearish expectations.

We have been of the opinion that the combination of investor sentiment and lowered valuation imply a buying opportunity for long-term investors. However, the near-term is getting tougher to call as each rally has been short-lived. 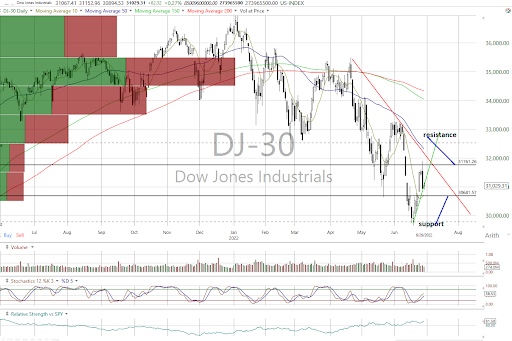 The major equity indexes closed mostly lower with negative internals on the NYSE and Nasdaq as all closed near the midpoints of the session.

At the close, the trends were unchanged with the DJIA (see above), Russell 2000 and Value Line Arithmetic Index still bullish and the rest neutral as several support levels were tested successfully.

However, all are likely to be broken at the Thursday morning, putting those trends in question.

Also, there was some deterioration in market breadth as the cumulative advance/decline lines for the All Exchange, NYSE and Nasdaq shifted to neutral from bullish.

The percentage of S&P 500 issues trading above their 50-day moving averages (contrarian indicator) was unchanged at 13%, remaining bullish.

However, the detrended Rydex Ratio (contrarian indicator) at -2.04 is on a very bullish signal. We believe it remains a positive for the markets as the leveraged ETF traders remain highly leveraged short versus leveraged long at the beginning of the year and prior to the market's declines.

The Investors Intelligence Bear/Bull Ratio (contrary indicator) also saw stayed on a very bullish signal and at a decade peak of fear at 44.7/26.5 as bears increased while bulls declined. As noted previously, such extreme levels of investor fear have typically presaged notable market rallies.

Wednesday's successful tests of support will likely be violated early Thursday. So, while we remain of the opinion that current valuation and investor sentiment remain encouraging, we will need to see a strong recovery from the early lows to remain encouraged for the short term.