Three straight "up" candles for the S&P 500. For the Nasdaq Composite. The Composite actually accomplished something, that being the taking back of its own 21-day exponential moving average (EMA). For the second time in two weeks, this index will try to hold that (thin green) line: 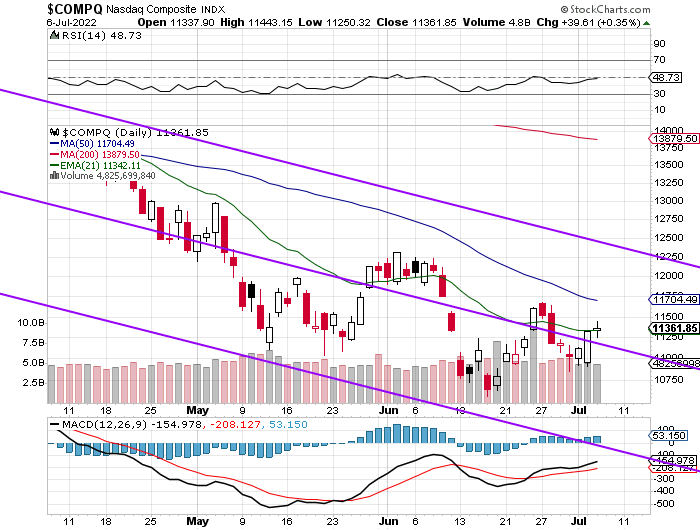 Doing so, would allow visions of taking on the Nasdaq's 50-day simple moving average (SMA) to dance in portfolio managers' heads.
Overall though, Thursday's session was quiet. Though there was a late-day rally courtesy of an FOMC Minutes that told us only that the Fed was hawkish three weeks ago (we knew that), but not more hawkish than we thought three weeks ago. That late rally was then met by even later profit-taking. Price discovery on Thursday was led by traders, not investors.
Check this out: The S&P 500, Nasdaq Composite, and Dow Industrials all gained 0.36% or less for the session. The Dow Transports closed down less than a smidge. Tech found support. The Nasdaq 100 and Philadelphia Semiconductor Index scored gains of 0.62% and 0.66%, respectively. That said, leaving the land of large-cap stocks, there was far less enthusiasm for equities of lesser size. The S&P MidCap 400 gave up 0.6%, while the Russell 2000 and S&P SmallCap 600 spit the bit, surrendering 0.79% and 1.17%, in that order.

How strong was the market's structure on Wednesday? Not very.
Seven of the 11 S&P sector-select SPDR ETFs shaded green for the day, but nine of the 11 closed between +0.86% and -0.33% for the session. The outliers were the Utilities ( XLU) , up 1.04%, and this summer's unloved sector, Energy ( XLE) , down 1.71%.
Losers beat winners by a rough 5 to 3 at the NYSE, and by more than 5 to 4 at the Nasdaq. Advancing volume took only a 26.1% share of composite NYSE-listed trade, but a 56.5% share of composite Nasdaq-listed trade.
Trading volume in the aggregate fell significantly on Thursday from Wednesday for NYSE and Nasdaq listings, as well as across subordinate names of both the Nasdaq Composite and S&P 500. Notice that on that chart above that for the Nasdaq Composite, the past three "up" days all came on lower trading volume than did the run of "red" candles that preceded this positive turn.

There were two takeaways, I thought, from the "dated" FOMC Minutes.
One, "Many participants judged that a significant risk now facing the committee was that elevated inflation could become entrenched if the public began to question the resolve of the committee to adjust the stance of policy as warranted." Here, we are being told that there is great concern among policy makers that U.S. consumers, aka "the public", could begin to expect an elevated pace of inflation over the longer-term. The Fed finds this unacceptable.
Secondly, the Minutes indicate that the committee now supports interest rates moving to a level that actively begins to restrain activity. Participants find this posture to be appropriate "from a risk management perspective," the case being made that the central bank could be placed in a better position to implement increasingly restrictive policy "if inflation came in higher than expected." The committee flat out tells us here that they are willing to damage the economy in order to get a handle on and tamp down consumer-level inflation. Even though monetary policy (my opinion) can really only impact core inflation at this time.
At first there was little movement in futures markets trying to price in the future trajectory for the fed funds rate. Overnight, the outlook became noticeably more hawkish. As of this morning, there is now a 99% probability for a 75 basis point increase on July 27 followed by a 99% probability for at least a 50 basis point hike on September 21. Then the outlook gets more pedestrian, with 25 basis point increases likely in both November and December to end the year with an FFR of 3.25% to 3.5%.
It is then that futures markets stop pricing in hikes at all. These markets see the fed funds rate steady at that level through July 2023, which is as far as my crystal ball (The CME group's website) goes. On Wednesday morning, there had been a June 2023 rate cut priced in that had been pushed out to July 2023 by Wednesday night. This morning, there is no rate cut priced in at all.

Trouble With the Curve

And while this is, and should be alarming, the even more key 3-Month/10-Year yield spread actually steepened on Wednesday:

This spread, and this could be important, gang, is up to +108 basis points as we work our way through the wee hours, expanding on Wednesday's steepening. Just what the heck does that mean? Is it possible that something else is being signaled here in addition to or even instead of imminent recession? Now, don't get me wrong, I do think we are either in recession or at least this >< close.
I also think there may be something else at work in the yield curve. We may, and this is really just conjecture, but educated conjecture based on recent price discovery across the commodity complex, but we may be standing at the precipice of an outright collapse in core inflation. This in no way negates any real or perceived economic contraction, but it would, in spite of what fed funds rate futures are now telling us, slow the FOMC down a great deal.

We know that the U.S. and its allies are discussing capping Russian oil at between $40 and $60 per barrel in an effort to limit the Kremlin's crude derived revenue. This idea was mentioned at the G-7 meetings more than a week ago.
The problem is that oil is a global market and although the U.S., U.K., EU and other nations are sanctioning, will sanction, and have sanctioned Russian oil, Russia is believed to still be bringing in more than $600M in oil money per day, selling crude at a market discount but still at roughly $80 per barrel. According to Bloomberg News, China has doubled what it spends on Russian oil over the past three months, and India has spent $5.1B on Russian oil over that same period, up more than five-fold over the year-ago period.
The cap, if implemented, would be based upon Russia's perceived marginal cost of production and the price of Russian oil prior to the February 24 invasion of Ukraine. In response, the Putin regime is threatening to cut off the flow of Kazakh oil to Europe (1.5M bpd) from the Black Sea export terminal.

It's that time of year again. The fancy and foolish once again descend upon the annual Allen & Co. Media and Technology Conference in Sun Valley, Idaho. The event, which kicked into high gear on Wednesday and will run into the weekend, is typically secretive, and highly secured, as portions of the resort area are closed to the public.
The annual (since 1983) shindig for the rich and famous has been a hotbed for media deals and merger incubation. This is supposedly where the groundwork was laid for Comcast's ( CMCSA) acquisition of NBCUniversal, and Walt Disney's ( DIS) acquisition of Capital Cities/ABC in past years.
Known or thought to be in attendance this year are leaders or representatives from Netflix ( NFLX) , Paramount Global ( PARA) , and Warner Bros. Discovery ( WBD) on one side, and the likes of Amazon ( AMZN) , Disney, Apple ( AAPL) , Alphabet ( GOOGL) , Meta Platforms ( META) on the other.
Could anything happen? Anything could indeed happen.