By STEPHEN GUILFOYLE Jun 07, 2022 | 07:49 AM EDT
Stocks quotes in this article: SJM, CASY, AAPL, AFRM, NOW, XLY, XLB
You start out walking in a creek or streambed in order to prevent yourself and your people from leaving discernable tracks. Makes sense. At least this shallow stream seems to be running more or less toward the direction that we need to be moving.
Before long, you end up in a swamp miles across in every direction (That rots, get it?)... where the murky, disgusting water is deeper than you are tall, while trying to keep your important gear dry (thank goodness for plastic bags), while trying to keep the awful "whatever it is" out of your mouth, and hoping that "whatever the heck that was" stays over there.
Oh... and all while feeling around with your feet for anything that can support your weight, every once in a while gratefully finding a patch of roots, or a softish bottom. No fun at all trying to navigate, using a map and compass while treading dirty water carrying weapons, ammo, and a full week's load on your back.
That's kind of how navigating these markets feels like.
We go from imminent recession to higher yields across the entire Treasury curve because recessionary fears are fading in the blink of less than one trading session. We go from peak inflation to past-peak inflation to persistent inflation as we trade and listen along to financial media all looking at the same data and focusing on different potential outcomes. We see commodities, oil in particular, but generally most commodities run higher on dollar strength. Yeah, that one makes sense. We complain, but imagine if the U.S. dollar lost its edge somehow? Then, we'd learn a thing or two about painful inflation.

Happen to see...
The BRC (British Retail Consortium) Retail Sales Monitor for May? -1.5% y/y on top of April's -1.7% and March's -0.4%. Consensus for May was for +0.2% y/y.
Japanese Household Spending for April? -1.7% y/y on top of March's -2.3%. Consensus was for -0.5% y/y.
German Factory Orders for April? -2.7% on top of March's -4.2% on top of February's -0.8%. Consensus was for +0.4%.
As all eyes turn to this Friday's May CPI in the U.S., with headline expectations for year-over-year growth of 8.2% to 8.3%, which would be even with April's 8.3%, and core inflation seen at 5.9% down from April's 6.2%, consider this:
The  inSpectrum DRAM Contract Price as of the end of May was down 13.6% since last September.
The Drewry Shipping Index as of the end of May, spot price was down 26.9% since last September.
The North American Fertilizer Index as of the end of May was down 25.5% since March. (data sourced from Bloomberg News)
While the above data and roughly $119 will buy you your next barrel of crude oil, these factors do suggest an easing of a few factors that have caused both higher prices and constrained supply lines over the past year plus. I can't promise a cheaper tank of gas or cheaper rent, but if the three lines above are true, and these trends continue, then supply constraints of certain semiconductor chips found in everything from computers to household appliances are easing, the cost (and by implication, availability) of shipping containers has started to normalize, and input prices for agricultural commodities have relaxed.
However...
The Bloomberg Commodity Spot Index surged 1.9% on Monday to an all-time record, and went out above 136 for the day. The primary culprits on Monday were natural gas and wheat as concerns increased over ever getting Ukrainian and/or Russian commodities to market.
This is with a Japanese yen that has fallen to a 20-year low versus the U.S. dollar. One greenback now buys 132.72 yen. Remember when the yen almost reached parity with the U.S. penny? That was only about a year and a half ago. Bank of Japan Gov. Haruhiko Kuroda spoke on Monday, and confirmed what we all thought, that the BOJ is not even considering tightening monetary policy any time soon.
As long as the BOJ remains dovish and the Federal Reserve raises rates while withdrawing excess liquidity from the monetary base (which is the correct policy trajectory, though I might differ in the execution), the U.S. dollar will remain relatively strong on the global stage. This, believe it or not, is acting as a check on U.S. inflation. It could have been and still could be worse without currency exchange rates where they are.
At least President Biden has temporarily allowed U.S. solar power developers to source solar panels and components from Cambodia, Malaysia, Thailand and Vietnam tariff free. While this move likely does little if anything to alleviate the inflation currently being suffered across lower and middle class America. It does open the door for Chinese manufacturers who are thought to be dodging tougher tariffs on their exports by completing their solar panels in southeast Asia. oh joy.
Mixed signals for sure, but this is that ray of hope that U.S. markets seemed to cling to on Monday as Treasury yields spiked (I see the 10-Year Note paying 3.03% this morning), and equity markets, though they closed well off of their highs, managed to tolerate those elevated bond yields quite well.

It was a day of mixed performance, never mind mixed emotion. The Nasdaq Composite flirted with a 2% gain, only to close up 0.4%. The S&P 500 had been 1.5% higher, but closed up 0.31%.
While large gains were lost, small gains were experienced broadly across all major and almost major U.S. equity indexes. Winners beat losers at the NYSE by a slim 9 to 7 margin, while losers edged winners at the Nasdaq market site by just a smidge. Advancing volume captured a 62.9% share of composite NYSE trade, and 52.9% of that metric for Nasdaq-listed names.
Sector performance was for the most part, pedestrian in nature. Nine of the 11 S&P sector-select SPDR ETFs gained any ground on Monday, as two shaded red. Nine of the 11 also either gained or lost half of one percent or less on the day with Consumer Discretionaries ( XLY) and Materials ( XLB) the outliers at up 1% and 0.95%, respectively. Interestingly, I thought it was that on a day where large gains were lost, but some gains were somehow hung on to, that aggregate trading volumes (though still not heavy) managed to increase from Friday's anemic totals... across NYSE-listed stocks, Nasdaq-listed stocks, the S&P 500 and the Nasdaq Composite.
Does it mean much that trading volume increased on Monday, given that stocks only really gained small? Probably it underscores further the lack of conviction across our marketplace during Friday's selloff more than anything else.
What I think matters more than trading volume right now, as I have expressed in recent days, is the 21-day EMA (exponential moving average), which has held and acted as support for the S&P 500, Nasdaq Composite and Russell 2000 for six days now. Yes, I see where the futures are trading this morning. We'll have to wait and see, but this sort of mini-consolidation is necessary if these indexes are to make a run at their respective 50-day SMAs (simple moving averages), which is where at least some portfolio managers will feel compelled to add long exposure.
Know thy enemy.

On Monday, I re-entered a name that has been very good to the Sarge over the years. Not that I know I am right. Far from it in this environment. So far this is an entry-level position with an intent to build over time. I speak of CEO Bill McDermott's (another Sarge -fave) ServiceNow ( NOW) .
Why now, ServiceNow?
The reason for the entry was purely technical. At 67 times next year's earnings, the stock can still be called overvalued. However, the growth has remained consistent. Sales have grown anywhere from 25% to 35% on an annual rate for each quarter going back years and the same, though trending toward the lower end of that range, is expected for the current quarter ( to be reported at the end of July).
The fundamentals are strong. Free cash flow and tangible book value are at either multi-year or all-time highs. The balance sheet is in good shape. The current ratio stands at 1.12. Cash dwarfs long-term debt. There is no abuse of "goodwill" or other intangibles to bloat assets.
Let's take a look at the chart: 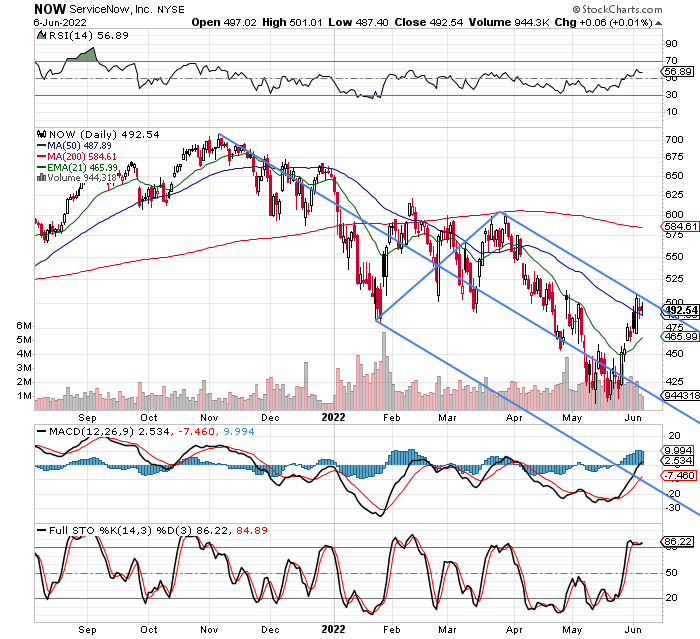 Note that NOW has retaken its 21-day exponential moving average (EMA), and on Thursday, its 50-day simple moving average (SMA) (on heavy volume). The stock has held the 50-day SMA for three days now, and survived a test of that level ($487) early on Monday. The shares hopefully will go through a mini-consolidation here and move toward breaking out of the upper chamber of our Pitchfork model (trend in place since November) allowing thoughts of a potential move toward the stock's 200-day SMA.
While the full stochastics oscillator does see NOW as possibly overbought, both Relative Strength (which is still very neutral) and the daily Moving Average Convergence Divergence (MACD) (with a negative 26-day EMA) suggest that there could be some room to run before the stock can be termed as being "technically overbought."
Should my pivot of $487 hold, my target becomes the 200-day level of $584. That just happens to be a 20% move from pivot. Should the $487 level fail, likely so will my trade. The 21-day EMA of $466 is my add, a break of that level, let's say $463, would be my panic point.

Oh, you mean WWDC22?
I mean, I know that we have become spoiled. Apple ( AAPL) did announce updates across its operating systems for almost all of its consumer electronics products. The company did unveil the new versions of the MacBook Air and MacBook Pro with the "in-house" M2 chip. Sorry, when I type out "Ma Deuce" it's not a semiconductor chip that I think of.
Apple also revealed some cool improvements being made to Apple Wallet and Apple CarPlay. The company even knocked some stuffing out of Affirm Holdings ( AFRM) stock by announcing a "buy now, pay later" option for Apple purchases.
What I did not hear was any peep about landing the NFL Sunday Ticket. Perhaps it's still coming. That might be the needle mover. Nothing we heard on Monday was.

While there are plenty of serious arguments that justify this strength, the primary reason that it's so strong is mainly due to positioning.

On the Road to Recovery

While a near-term pause may be in the cards, improvements in trend and breadth are encouraging.

It's difficult to see how this bill is a broad win on inflation.