By STEPHEN GUILFOYLE Aug 11, 2022 | 07:32 AM EDT
Stocks quotes in this article: XLB, XLY, XLC, XLK, DIS, DDS, USFD, WRBY, RIVN
One day you will rise and you won't believe your eyes
You'll wake up and see
A world that is fine and free
Though summer seems far away
You will find the sun one day
- "True Grit" Black, Bernstein (Glen Campbell), 1969

Then It Happened (Trader Talk)

What happened?
A rally. A rally that actually had that go-go Wall Street 1980's feel.
Oh yeah, chili dog.
Can it last?
I don't know.
Could get punched in the mouth from here.
Been there, done that.
Remember that day, June 24th that confirmed the tradable bottoms of the week prior?
Of course I remember.
Ended up being a lot more than a tradable bottom.
Sure did.
Rock on, old spice.

The Nasdaq Composite popped for a gain of 2.89% on Wednesday, closing near the top of the daily range. Wednesday's intraday high for the index exceeded Tuesday's intraday high, creating a new post correction apex.
As of the closing bell, the Nasdaq Composite stood 21.7% above it's June 17 low. The index had kissed the 20% rally off of the lows mark a couple of times last week, but had failed to hold the level. On Wednesday, even at the day's lows, the Nasdaq Composite rested 20% above those awful lows of mid-June. All hail the new bull. Same as the old bull? Not a chance.
Equity markets roared on Wednesday. Beyond the Nasdaq Composite, the S&P 500 gained 2.13% for the session, while the Russell 2000 ran 2.95%. Those two "majors" closed up 15.8% and 19.99%, respectively, from their lows. That's right, the Russell 2000 (small-caps) is this close >< to entering into its own bull market alongside the Nasdaq Composite. All that the Russell needs to do Thursday is budge the line of scrimmage. Call the old quarterback sneak, with a shove from a 310-pound guard lined up as a fullback? That's what I would do.
Let's take a look at some narrower, but very important equity indexes. The Dow Transports gained 3.09% on Wednesday to close up 17.5% from its June low. The KBW Bank Index scored a run of 2.9% on Wednesday to close up 14.4% from the lows, and the Philadelphia Semiconductor Index took back 4.25% worth of scorched earth to finish the session up 25.2% from its early July low, but is still down 3.2% from its early August high.

Not Exactly Full of Woe

Wednesday's child was a bit more optimistic than that. After consumer inflation for July surprised to the downside across nearly all metrics, the U.S. Treasury was able to hold a strong auction for $35B worth of 10-Year Notes, Treasury curve yield spreads relaxed (just a little), and as mentioned above, it was "risk-on" for U.S. equity markets.
All 11 S&P sector-select SPDR ETFs shaded green for the session, with six of the 11 sporting daily gains of at least 2%. Cyclicals and Growth stocks moved toward the top of the daily performance tables as more defensive types lagged broader markets. Materials ( XLB) , Discretionaries ( XLY) , Communication Services ( XLC) , and Technology ( XLK) finished in places one through four, but neatly packed together in a tight bunch.
Winners beat losers at the NYSE by roughly 9 to 2, and at the Nasdaq Market Site by about 7 to 2. Advancing volume took a 90.8% share of composite NYSE-listed trade, and an 84.3% share of that same metric for Nasdaq listings.
There is a divergence in trading volumes. however.
Composite NYSE-listed trading volume soared 15.5% day over day from Tuesday, supporting the idea that professional money movers actually chased their way into these markets on Wednesday. But aggregate trading volume for Nasdaq-listings was not as convincing. Trading for those names actually ebbed fractionally. That said, trading volume across constituents of the Nasdaq Composite, though slightly lower day over day, did end above the 50-day trading volume simple moving average for the index for a fifth day in six.

The Bureau of Labor Statistics published July data for consumer prices on Wednesday morning, and will post July producer prices this morning as well. Results for July were quite encouraging relative both to the burning-hot numbers recently realized across several months, and against expectations.
Headline consumer inflation printed at 8.5% year-over-year growth vs. the consensus view for an increase of 8.7%, and down from June's 9.1% reading that is now the apex of the current cycle. Core consumer inflation, which excludes prices for food and energy, hit the tape at year-over-year growth of 5.9%, in line with June, and below expectations for growth of 6.1%. This keeps in place the narrative that March 2022 was the peak of this cycle for core inflation. That's important.

As for core inflation, prices of used vehicles, apparel, and transportation services all saw below-trend growth -- even outright contraction in July. But, as those prices fell, the costs of new vehicles, medical care services, medical care commodities and shelter grew above trend in July. The oddity here is that three of those four groups (except for new vehicles) have seen prices grow below trend over the course of the past 12 months.

Obviously if the below-expectations headline July data can be a turning point, that would be a positive for the entire economy. Bond traders bought the Treasury curve early in response.

In response, the likelihood of a large rate hike made by the Fed on Sept. 21 has decreased. According to futures' markets trading in Chicago, there is now a 62% probability for a half percentage point rate hike on that date, while these futures markets show a fed funds rate of 3.5% to 3.75% at year's end, which would be the high-water mark for the FFR for this cycle.

The first rate "cut" is once again being priced in for June 2023 after briefly moving into May 2023 mid-day on Wednesday.

They Did Ask Evans

If the Fed is going to "pivot", not dovishly but in a less-hawkish direction, you'll hear about it when all of the plate spinners and jugglers show up at Jackson Hole, Wyoming this Aug. 25 through Aug. 27. The theme this year is "Reassessing Constraints on the Economy and Policy." Futures markets appear to be backing up this idea, however, two Fed officials, both regional district bank presidents once thought of as notoriously dovish in nature, attempted to throw cold water on the very idea in the wake of the July CPI report.

Minneapolis Fed President Neel Kashkari has said that he would like to see the fed funds rate at 3.9% (current FFR: 2.25% to 2.5%) by year's end, and at 4.4% by year's end 2023. Kashkari said on Wednesday: "I haven't seen anything that changes that." When asked about potential rate cuts in 2023, Kashkari said, "I think a much more likely scenario is we will raise rates to some point and then we will sit there until we get convinced that inflation is well on its way back down to 2% before I would think about easing back on interest rates."

At a separate event, Chicago Fed President Charles Evans stated that the current pace of inflation remains "unacceptably high" and that he expects that the Fed, "Will be increasing rates the rest of this year and into next year to make sure inflation gets back to our 2% objective."

Neither Kashkari nor Evans is a voting member of the FOMC this year. Both Minneapolis and Chicago vote in 2023. However, Chicago Fed President Charles Evans has stated his intention to retire in early 2023. 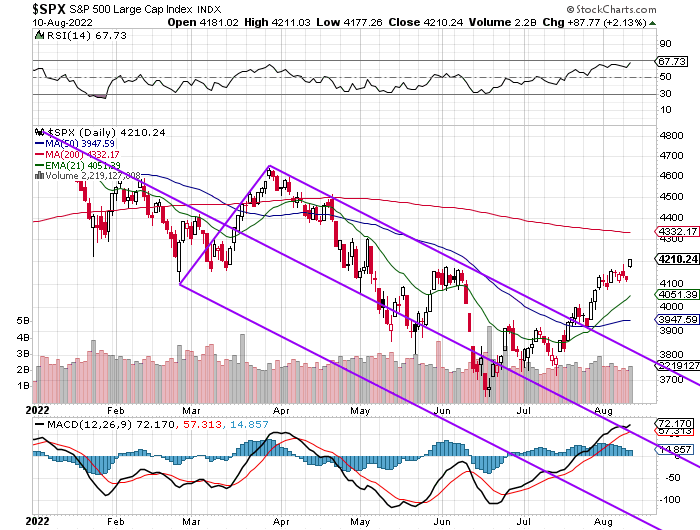 The index approaches technically overbought territory without yet actually getting there. The highs of late May/early June as well as the psychological 4200 level were both taken back on Wednesday, setting up a potentially volatile period of digestion that would pull the daily Moving Average Convergence Divergence (MACD) back from extended levels for both the 12-day and 26-day exponential moving averages.
That said, the upside target becomes the 200-day SMA, which is HUGE for professional managers. The positive take here is that this 200-day SMA is actually sloping downward (for about two months now) to meet the index, while both the 21-day EMA and 50-day SMA (potential short and medium -term support) are following the index higher.
What could screw this up? A hot PPI pint this morning. More recessionary looking macroeconomic data. Ever higher short-term interest rates before older rate hikes are truly worked into all corners of the economy as the Fed's quantitative tightening program accelerates, drawing liquidity out of both the marketplace and the economy.
In other words, a lot can go wrong, but the technical setup remains positive until we have price discovery on trading volume that confirms otherwise (Mid-June in reverse). 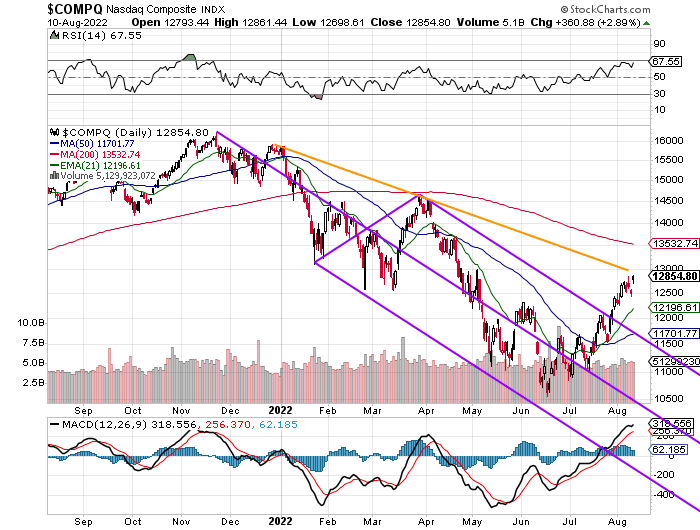 The test of the trendline that the Nasdaq Composite failed on Monday has apparently been set for a retest this morning. 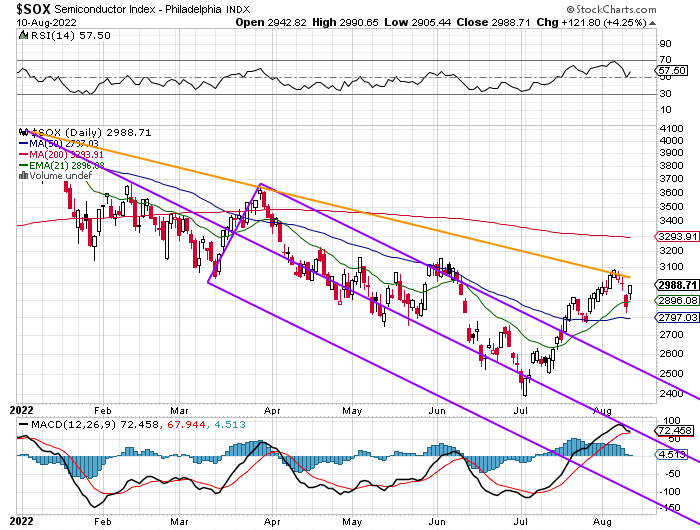 That same test has seen the semiconductors engaged in battle for several days now. Note that here, both the Relative Strength Index and the daily MACD are a much more hazardous place. This index threatens to break the trendline to the upside, and perhaps lose its 21-day EMA all at the same time.

I have already written too much for this column. I will not leave you flat. I took some overnight profits in Disney ( DIS) . I am still long the name.
I will come back to you shortly here on Real Money with a separate piece covering Disney's earnings around or shortly after the opening bell in New York.