By STEPHEN GUILFOYLE Jun 23, 2022 | 07:26 AM EDT
Stocks quotes in this article: ACN, DRI, FDS, AVAV, FDX, XLE, XLRE, XLV
Potentially important.
In recent days, Lithuania has pledged to halt sanctioned Russian goods from reaching the isolated Russian province of Kaliningrad via any route that passes through Lithuanian territory. Nikolai Patrushev, Secretary of Russia's Security Council, quickly threatened a Russian response that would "have a serious negative impact on the population of Lithuania."
Separately, Estonia has accused Russia of simulating missile attacks inside of that Baltic nation and complained that a Russian helicopter had crossed over Estonian territory on June 18. Both Lithuania and Estonia are members of the European Union and perhaps more importantly, NATO. Not necessarily in response, Russia announced for their Baltic fleet, imminent large-scale Naval exercises in the Gulf of Finland. All ahead of next Tuesday's NATO summit in Madrid.
On Wednesday, Financial Times Nordic and Baltic reported Richard Milne penned a piece discussing Estonian Prime Minister Kaja Kallas and her concerns about a NATO defense plan that she says allows for the three Baltic states to be overrun and retaken within 180 days. She points to how much destruction has been suffered by Ukraine and the Ukrainian people in far less than half of one year under Russian military assault. Kallas is pushing for change from the current NATO deployment of 1,000 troops in each of the three Baltic states (Lithuania, Latvia, Estonia) that are part of the NATO alliance, but were once part of the Soviet Union... to act as a "tripwire" to one where a larger force is set in place to defend the integrity of Baltic national borders.
Kallas apparently has asked or will ask for a division of 20K to 25K NATO troops to be deployed to each of the three nations to be composed of both foreign NATO troops (at least 3K to 5K that could be doubled) and Baltic NATO troops.
Almost on cue, and something you probably have not seen covered in the mainstream media (I found it at Estonian World), France dropped about 100 paratroopers from the 11th Parachute Brigade into Estonia on Wednesday in "Operation Thunder Lynx." This appears to be an effort to demonstrate France's ability to deploy almost immediately anywhere, anytime in support of NATO forces in Europe. This also follows the earlier deployment of four French Mirage 2000-5F fighter aircraft to Estonia this Spring. Those aircraft are expected to remain in Estonia at least into August.
As far as composition is concerned, the French 11th Parachute Brigade is comprised of combat paratroopers from the French Army, French Marines, and French Foreign Legion. In short, these guys are pros.

The big story on Wednesday was the bond market. While equities rallied into midday, only to sell off over the session's final two hours, Treasuries were bought up, and bought quite aggressively.
The U.S. 10-Year Note paid as little as 3.14% late Wednesday after yielding as much as 3.3% earlier. The U.S. Two-Year Note also ran -- all the way to 3.04% from 3.2%.

This morning, I see the 10-Year giving up just 3.11%, which just happens to be that yield's 21-day exponential moving average (EMA). How key is that? Perhaps not very, as readers can see, for this product, the 50-day simple moving average (SMA) (currently at 2.96%) has been a much bigger deal, as that is where the 10-Year had hit resistance (support for the yield) both in late May and early March.
Interestingly, equities do not at the present appear to be the benefactor of rapidly shrinking yields/interest rates. Perhaps the feeling is that as the FOMC continues to try to push out the short end of the curve, recessionary pressures will continue to pull in the long end. Currently, the 3-Year, 5-Year and 7-Year Notes are inverted versus the 10-Year, while the 5-Year Note is within two basis points and the 7-Year within just one basis point of inverting versus the 30-Year Bond.
What is this telling us?
While the two spreads (30-day versus 10-Year, 2-Year versus 2-Year) that most accurately signal recession are not flashing red at this moment, the 2yr/10yr spread did invert as recently as early April. While the yield curve may or may not be signaling recession, there is no doubt that it is signaling a difficult outlook for the trajectory of economic growth for an extended period of time.

WTI Crude futures took a pasting on Wednesday morning, to then tread water at lower levels for the balance of the day. This took the Energy sector lower, which weighed upon broader stock markets.
For the Wednesday session, six of the 11 S&P sector-select SPDR ETFs closed in the red, with Energy ( XLE) off an even 4%. In two weeks (since June 9), the XLE is now down 22.2% from the high of that session. That said, the XLE has stubbornly refused to truly enter into a technically "oversold" condition, though close enough: 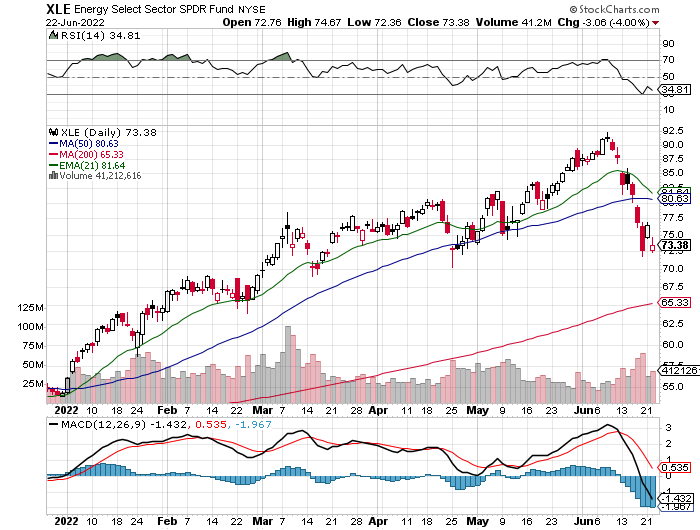 Fact is that the XLE remains as the only sector SPDR ETF still up year to date (+34.8%) and the only one still standing above its own 200-day SMA. However, there has been enough technical damage for sure. The medium-to long-term trend, as defined by a Pitchfork model going back to the lows of last August, has broken through lower trendline support. 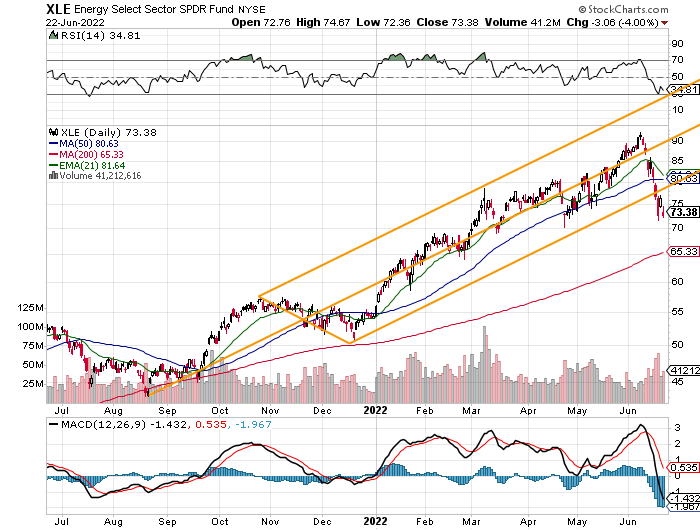 Looking at the broader market, losers beat winners at the NYSE by roughly 9 to 8, while winners beat losers at the Nasdaq Market Site by a narrow 12 to 11. Advancing volume took a 40.4% share of composite NYSE trade, but 53.4% of that metric for Nasdaq listings. Trading volume was down small for NYSE stocks in the aggregate, but up small for Nasdaq names.
The Dow Transports gave up 1.12% on the day, in a nod toward growing fears over imminent recession, but there was not much movement elsewhere. Despite an early rally, across the Dow Industrials, S&P 500, 400, 600, Nasdaq Composite and 100, and Russell 2000, not one index among them surrendered less than 0.13% or more than 0.33%.
Five sector SPDR ETFs shaded green for the day, and sectors that we would consider to be "defensive" in nature, took four of those slots, led by the REITs ( XLRE) , and Health Care ( XLV) .

Can We All Just Agree That....

.. Senators serving on the Senate Banking Committee and Representatives serving on the House Financial Services Committee should at least have to pass some kind of basic college level economics course prior to serving? This has become ridiculous. For how many years must we cringe?

In his testimony before the Senate Banking Committee, Fed Chair Jerome Powell said:
A) "The American economy is very strong and well positioned to handle tighter monetary policy."
B) "Inflation has obviously surprised to the upside over the past year, and further surprises could be in store."
C) "We therefore will need to be nimble in responding to incoming data and the evolving outlook, and we will strive to avoid adding uncertainty in what is already an extraordinarily challenging and uncertain time."
Translation:
In short, the U.S. economy, while coming off of a negative quarter and staring smack dab at a potential second successive quarter of contraction of at least no growth, is strong enough to handle tighter monetary conditions, because we have decided to focus on inflation at the expense of economic activity and probably labor markets. We will be nimble, as nimble as a gardener using a sledge hammer to plant tomatoes.
At Yahoo Finance, Philadelphia Fed President Patrick Harker said:
A) "We could have a couple of negative quarters."
Translation:
None needed.
In a speech, Chicago Fed Pres. Charles Evans said:
A) "Supply-side repair could continue to move too slowly; events in Ukraine or further Covid-related shutdowns in China or other countries could put additional pressure on costs; and monetary policy may, on the one hand not rein inflation in enough or, on the other hand, weigh too heavily on employment."
Note: Pretty sure that Sister Grace Ann warned me about ever writing a sentence like that.
Translation:
Put your helmet on.

The Market is Hitting a Short-Term Peak

The intraday reversal Tuesday may have cooled off the momentum and will allow some consolidations and pullbacks to develop.

I think the most troubling data-point Tuesday was the analysis concerning contract or 'home-purchase agreement' cancellations.

Japan Rises Above Pre-Covid Levels, Set for 3 Years of Growth

The tortoise of Japan may be far behind the hare in the West, but Tokyo is pacing itself for steady multiyear growth.