By STEPHEN GUILFOYLE Jan 04, 2022 | 07:38 AM EST
Stocks quotes in this article: JEF, XLE, XLF, XLK, TSLA, LCID, F, GM, MSFT, AAPL, AMD, MRVL, NVDA, INTC
Reading the environment.
It's not easy. So much to read into what is and what might be. So much to take away.
Spotting tracks in some mud. Big cat tracks? Canine? How pronounced are the toes on the paws? Are the claws visible? Are they still fresh? Filled with water? Are you tracking the beast? Are you sure there's just one? Are they moving quickly? Or are you so close as to be able to be watched yourself?
So much. Just from the shape of a print, or the damage caused to the foliage that the print or prints seem headed into. Sure? Never sure. A series of educated estimates (not guesses). Never guesses.
On Monday, not everyone, but a whole lot of participants returned to the marketplace. Treasury markets would steal the show after opening in New York as there had been no overnight trade Sunday into Monday due to foreign market closures. Bond traders sold their market hard, the long end of the curve especially so.
The U.S. 10- Year Note has paid just less than 1.64% early this morning, up from 1.496% late Friday night. The 30-Year Bond yields more than 2.03% as I write. Both levels are the highest seen, or lowest prices for these products, since pre-Thanksgiving November. Traders sold the short end as well, but not as severely.
As the yield for U.S. 10-Year Note did this...

...and the yield spread between the U.S. 10-Year Note and U.S. 2-Year Note showed a little less severity in relative depth of movement, but movement nonetheless...

Are there takeaways here? Is there something to see? Why such sharp movement in Treasury securities? Why such a generally positive day for equities, which we'll get to in a minute or two?
Markets are pricing in, at least for now, both a growing economy and controlled inflation (as long as Treasuries don't do this repetitively). In other words, markets think that this Omicron variant will not slow demand (or perhaps supplies of both goods and services) as sharply as previously feared. You may not trust the Fed, and I would not blame you for whatever you thought, but the market is saying at least for now... that "the Fed's got this."

How Do We Know?

We really don't. I could get my bat on the ball in the 90 MPH cage. You would think I was a good hitter if you didn't know me. Only had a few at bats in my life against minor-league quality pitchers. They easily made short work of me at the plate. I could not touch a well-thrown curve ball. A lot of guys can not. Problem here, There are always curves.
As it appears, at least anecdotally, that the Omicron variant is less lethal and presents less severely than its ancestors, regulators here in the U.S. suggest that maybe folks do not have to miss so much work if they do not feel sick. Sure, on Monday, the U.S. set a new record with more than one million new infections, and airlines continue to cancel thousands of flights due to a lack of available personnel (as airline stocks, but not their aircraft soar). Medical clinics are closing their doors all over the New York area, not because they are afraid to treat the sick, but because the good people who work there have tested positive. Not that sports are important, but they are visible. Both the National Basketball Association and National Hockey League have been canceling games every night because one or both teams can not field enough players.
Then there are the schools. While newly inaugurated New York City Mayor Eric Adams is out publicly announcing that the city's public school system will remain open, his counterparts in cities such as Milwaukee, Cleveland, Detroit, across the state of New Jersey and elsewhere are either canceling school this week or taking schooling online.
That circles us back to what has plagued U.S. labor markets since we first were introduced to the initial variant of this virus. Two-earner households who can not afford to or can not make other arrangements are forced to forego the second producer's income in order to keep someone at home with school-aged children. When your line at the grocer or the pharmacy is longer than you can imagine, and the person working in the place of two or three seems more than frazzled, this is why.
Back to the financial markets, because they seem to be telling us that what we see before our eyes is not what we'll see moving forward. Markets, and let's hope they are correct, are pricing in a rapid Omicron surge that plants the seeds of herd immunity deeply in and broadly across the population at reduced (although not inexpensive) cost in terms of human suffering.

The first thing I see as I look at Monday's equity market performance are three cyclical sectors atop the daily S&P sector-select SPDR ETF standings as Energy ( ( XLE) ) gained 3.1%, Consumer Discretionaries gained 2.87%, and the Financials ( ( XLF) ) popped for 1.23%.
Those three sectors were followed by the two "growthy" type groups. The Tech ( ( XLK) ) sector finished in fourth place at +0.95%, but that is misleading. Within that sector, the Philadelphia Semiconductor Index increased some 2.05%, which would be reflective of expectations for economic growth. However, also within that sector, the Dow Jones US Software Index surrendered 0.87% for the day. which would suggest higher interest rates. Defensive sectors took three of the bottom four places on Monday, which was a stark reversal in chosen allocation from what was experienced across the marketplace for the past week or two.
Trading volume, while not yet closing in on existing moving averages, did come back to life on Monday. Winners beat losers by four to three at the NYSE and by almost five to two at the Nasdaq. Advancing volume comprised 70.2% of NYSE composite volume for the day, which was up 45.3% from Friday and up 39,1% from last Monday. For Nasdaq domiciled names, advancing volume comprised 75.8% of the Nasdaq composite (not the index) volume for the day, which was up 30.9% from last Friday and up 17.6% from last Monday. In other words, there was certainly an increased degree of professional accumulation expressed in terms of price discovery on Monday.
Interestingly, the autos were truly hot, and it was not just Tesla ( TSLA) , up more than 13%, or Lucid ( LCID) , up more than 7%. Legacy automakers Ford Motor ( F) and General Motors ( GM) gained 4.8% and 4.3%, respectively for the session.

Remember way back in October when Microsoft ( MSFT) briefly claimed the title of world's most valuable public company? On Monday, Microsoft closed at a market cap just north of $2.5T. Not even close.
Apple ( AAPL) first became a $1T company in August 2018. It took another two years for Apple to hit the $2T mark. On Monday, less than three and a half years after hitting $1T, Apple for a moment, as the share price grazed $182.86 (The daily high was $182.88) was worth $3T.
Though APPL closed at $182.01, I see the shares trading with a $183 handle overseas as I work on this morning note. "Own it, don't trade it." That's what they say. They certainly weren't wrong.

On Monday, Goldman Sachs five-star (at TipRanks) analyst Toshiya Hari named Advanced Micro Devices ( AMD) and Marvell Technology ( MRVL) as his top two semiconductor picks for 2022. Later on Monday, I told Nicole Petallides on the TD Ameritrade Network, that I like Nvidia ( NVDA) as well, but right now I favor those same two names going forward too (I am and have been long all three for some time). Hari feels that Wall Street underappreciates the gains that AMD has made in the data center, and that for Marvell, data center gains plus 5G and automotive are not properly priced in.
I'll tell you what I see on top of that. For AMD, I see a strong balance sheet and stable cash flows as well as short interest comprising 6% of the entire float. I see a current ratio of more than two. Very impressive. For Marvell, I do see a lot of debt, and a tougher environment for margin.
Both stocks trade close to 55 times forward-looking earnings, which would be expensive if the world was not starved for more of what they sell. I see a CEO in Lisa Su of AMD who has miraculously turned that firm around, leaving Intel ( INTC) in the dust, and competing at the highest levels with Nvidia. I also see a CEO, Matthew Murphy of MRVL, who is starting to look like he understands whose example to follow here. He is well into turning Marvell around. 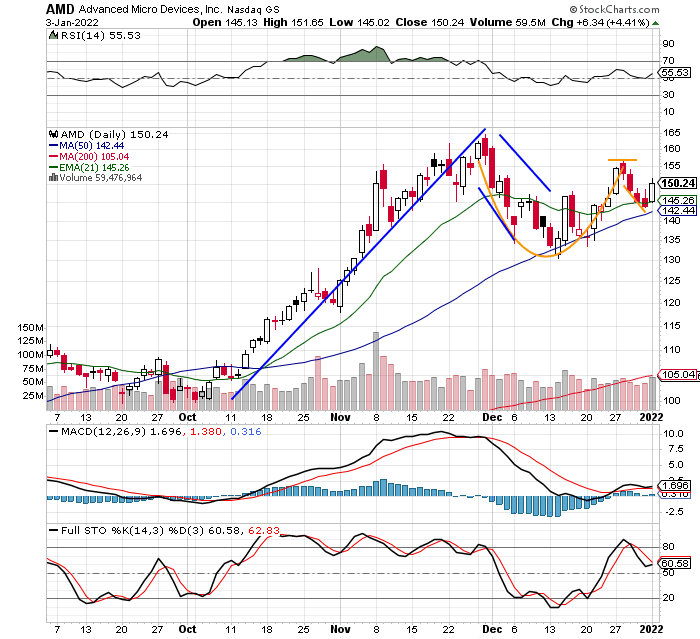 With AMD, readers will see that through November into early December, I thought I was probably looking at a "bull flag," which would be special enough. That flag turned into the left side of a cup that has now developed a right side with a $157 pivot and now a handle. The pivot has to be taken, but should that happen, the possibility of a breakout enhances exponentially.
Target Price: $188
Pivot: $157
Panic: $141 ($1 below the 50 day SMA) 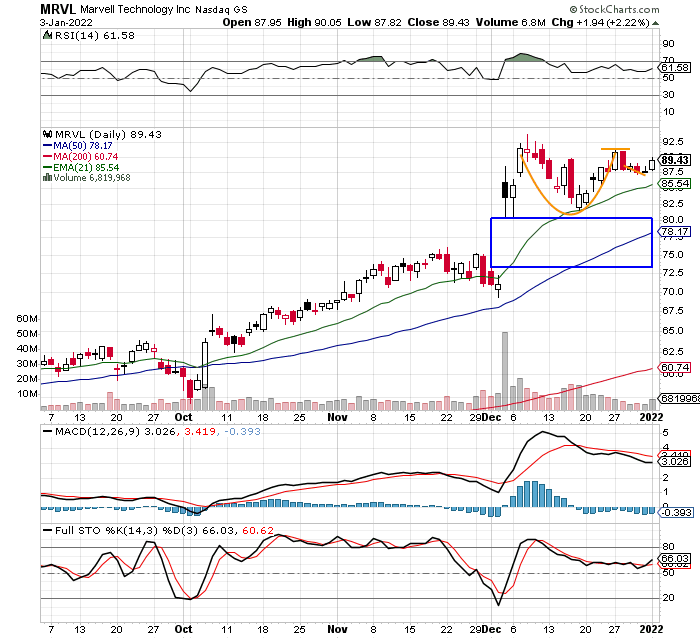 For MRVL, we see an almost similar-looking chart, although the cup is short and more shallow, thus less convincing for MRVL. I will have to be cautious here because MRVL popped on earnings and left an unfilled gap between $72 and $80. Does that gap have to be filled? Usually. Not always, but usually. In other words, if this stock sees $79, I am not sticking around to see if it hits $72. For the moment, though, we have to think that the cup with handle pattern might be real and that the group could move together.
Target Price: $109
Pivot: $91
Panic: $79 (for reason explained above)

After the Close: ( JEF) (1.31)
(Ford, Microsoft, Apple, AMD, Marvell and Nvidia are a holdings in the Action Alerts PLUS member club . Want to be alerted before AAP buys or sells these stocks? Learn more now. )
Get an email alert each time I write an article for Real Money. Click the "+Follow" next to my byline to this article.
TAGS: Futures | Indexes | Markets | Stocks | Trading | Treasury Bonds | U.S. Equity | Coronavirus

Investors Should Prepare for a Rough Start to 2023