"We did not get everybody out that we wanted to get out."

U.S. forces disabled the 73 aircraft, 70 armored vehicles and 27 humvees that they could not take with them, as they evacuated the airport at Kabul -- the last little slice of Afghanistan under American control nearly 20 years after war had been brought to American shores by a terrorist group using that nation for cover.

Many mainstream media outlets proclaimed the end of America's longest war, but the truth is that until the U.S. had withdrawn to that airport and allowed the Taliban to occupy nearly the entire nation as governmental resistance melted, there had been no U.S. combat casualties in Afghanistan in roughly 18 months. Sure, U.S. forces had to remain tactical, heck, we're tactical often, but war? 2012 was the last year that U.S. forces had suffered more than 100 KIA (killed in action) in a single calendar year. The U.S. had not been at war in Afghanistan for quite a while.

My position had long been an unpopular one. While both Democratic and Republican administrations had talked and made efforts to get to a point where the U.S. could extract the ongoing military presence in Afghanistan, my feeling had been that if nobody is actively trying to contest that presence, then from a strategic point of view, why would we not want to have a permanent garrison in western Asia, in a nation that touches both Iran and China, and exists just a stone's throw from central Russia? Am I the only one who sees value in that?

Those forces could have stayed out of anything beyond advising the fallen Afghan government, and taken the position of only defending themselves and their existence if and when needed. U.S. forces remain in South Korea 68 years after the Korean War went cold. U.S. forces remain in both Germany and Japan 76 years after the end of World War II. U.S. forces remain in what has for the last 60-plus years been a hostile Cuba, 123 years after the end of that conflict. Why? Because in each and every one of these cases, even if the U.S. presence had at first been maintained for purposes of stabilization, it eventually became strategically advantageous to stage U.S. air, naval, or land forces in eastern Europe, the Far East, or 90 miles to the south of Key West, Florida.

Call me crazy. I saw no reason to leave strategically important turf that was effectively being held by less than 3,500 troops, especially if nobody was actively trying to get rid of us. Especially in a neighborhood dominated by adversarial powers. Especially once it became apparent that our leaving would force a U.S. allied government to fall to a brutal, far less friendly one. Especially if we would knowingly leave behind American citizens that wanted to get out. Especially if we would abandon those who trusted us to those that will likely abuse them for having done so.

Nothing to celebrate here. Unless one is a fan of poor planning even more poorly executed. I honestly expected the president to demand multiple resignations from within his cabinet on Monday. Instead, it appears the mission now turns to damage control. The more important effort must now somehow be made to restore U.S. credibility with allies and client states, not to mention adversaries suddenly finding themselves gifted increased global and regional influence.

How to go about such a daunting task? That will take time. Nobody who needs us will trust the U.S. for quite a while after this. Perhaps generations.

The major large-cap equity indices rallied again on Monday. Both the S&P 500, up 0.4% and the Nasdaq Composite, up 0.9%, made news all-time highs for a fifth session in the last six. By today's (Tuesday's) closing bell, these two indices will have closed the books on nine winning months in 10, stretching the current monthly winning streak to seven. Though apparent market direction appeared the same, the action inside our marketplace on Monday was starkly different from what market participants experienced last week.

Cyclical sectors, leaders last week, sunk to the bottom of the daily performance tables on Monday. Energy fell, as component industry groups suffered less damage in the Gulf of Mexico due to Hurricane Ida than had initially been feared (also ahead of this week's OPEC meetings). Financials caught a jarring right cross to the jaw as yields fell out on the long end of the Treasury curve, compressing key spreads.

Interestingly, weakness in financials on Monday damaged both the blue-chip Dow Jones Industrial Average (-0.2%) as well as the Russell 2000 (-0.5%). Goldman Sachs (GS) , American Express (AXP) , and JPMorgan Chase (JPM) were among the bottom five Monday performers among the 30 constituent DJIA members. Most folks probably are unaware that in terms of weighting, Financials comprise 21% of the small cap R2K.

Technology and more defensive sectors led the way on Monday. This would be why the Nasdaq 100 (+1.1%), which has all of the Composite's Tech, and none of the Financials (+1.1%), outperformed the Nasdaq Composite itself. Tech was led by hardware, which was led by Apple (AAPL) after news broke that IDC (International Data Corp) forecasts overall smartphone sales to increase 7.4% for full year 2021, but IOS (iPhones) devices are expected to close the year at sales growth of 13.8%.

Barclays rates strategist Joseph Abate warns (if "warns" is the right word, maybe it's just a heads up) that demand for the Federal Reserve's overnight reverse repo operations could reach $1.4 trillion (nightly) by year's end. Abate did not speak to me directly. I found the story at MarketWatch. Abate makes the point that as debt-ceiling negotiations drag on, the U.S. Treasury will have to borrow less short-term money, and rely more on its cash balance at the central bank in order to at least fund the federal government into late October.

This means that as financial institutions flush with the green stuff in this overly liquified world we have created must find someplace to "stash the cash", already shrinking T-Bill markets will shrink further meaning:

One, short-terms rates will remain close to zero; two, the five basis points the Fed pays for overnight money look awfully good to folks just happy to preserve capital -- especially since those five basis points are the only thing keeping the short end of the U.S. sovereign yield curve in nominally positive territory.

Basically, Congress either needs to further suspend or just do away with the debt ceiling. Legally limiting federal borrowing has never worked. We are a fiscally irresponsible people and have proved through the generations that we will push these limits wherever they are. One day, either the Modern Monetary Theorists will be right, or the fiscal hawks will prove correct. Count me with the hawks. That in no way suggests that I know more than anyone else. I just have an opinion. Either way, the debt ceiling is no more than political gamesmanship.

Why is this such a big deal? Can't consumers who want to pay off a purchase over time, just use a credit card? Yes, but this is different. This slices an upfront payment into just a few installments, and online retailers typically pay BNPL companies transaction fees of greater than 4%.

In a recent interview, Square CFO Amrita Ahuja spoke of younger (Millennial and Gen Z) consumers and their "preference for more predictable and transparent borrowing." Ahuja noted that online payments are expected to reach $10 trillion by 2024, and that BNPL is only roughly 2% of that pie currently, but growing quite rapidly.

My gut? Of course an arrangement between Amazon and Affirm probably creates value for both sides. Is there some investor speculation that leads to something bigger here? Possibly. Then again, what prevents any number of Fintechs from simply imitating the model?

Only Because We Just Discussed This... 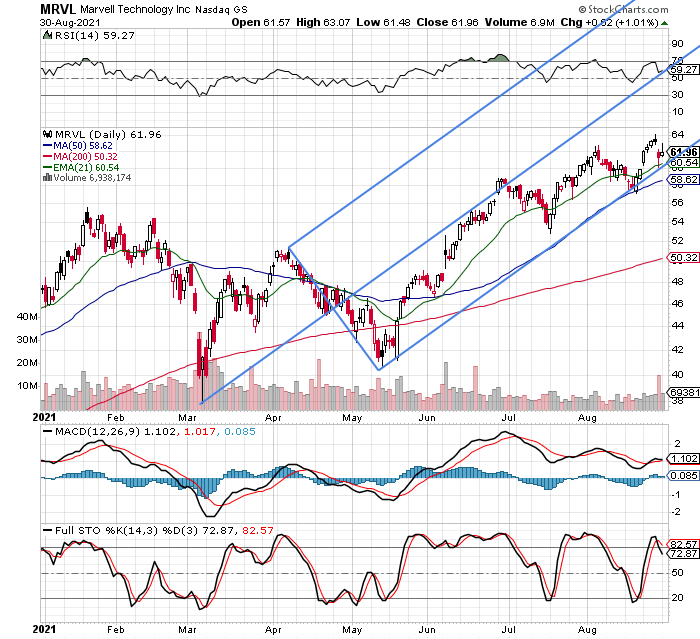 We just covered this name on Real Money last Friday. Just wanted to point out to those following that Marvell Technology (MRVL) not only rebounded off of its 21-day exponential moving average (EMA) on Friday, as well as of the lower trend line of our Pitchfork model, but it also closed the gap created on Thursday night by Monday.

My price target remains $72; the stock remains on track.

Get an email alert each time I write an article for Real Money. Click the "+Follow" next to my byline to this article.
TAGS: Federal Reserve | Indexes | Markets | Politics | Rates and Bonds | Trading | U.S. Equity