By STEPHEN GUILFOYLE Nov 09, 2021 | 07:41 AM EST
Stocks quotes in this article: BNTX, DHI, PLTR, WRK, COIN, FUBO, PLUG, WYNN, XLB, XLE, AA, CLF, MAXR, AMD, FB, NVDA, MRVL
Fourth down. Less than a yard to go. Two tight-end set. Two half-backs. No wideouts. One fullback lined up only about two yards behind the quarterback. The snap. The center and both guards form a low wedge and drive as best they can into the nose tackle. Fullback, with all his might, grabs the back of the armpits of the already forward-diving QB and adds the might of 240 pounds of pure muscle to the momentum.
Did he make it? Did they get the spot? Looks like the line of scrimmage has just barely moved. Sometimes, just barely is just barely enough. First down!
Certain cyclical-type sector select SPDR ETFs led the equity market daily performance tables on Monday such as Materials ( XLB) and Energy ( XLE) . This was some leftover response to the late-Friday passage of the bipartisan infrastructure bill in the House. My materials play remains Alcoa ( AA) and Cleveland-Cliffs ( CLF) . That has not changed. On top of that, financials got some help from slightly expanded yield spreads, and semiconductor stocks benefited from yet another daily boost. Still, Monday's "green" or "up" day shaded a very pale greenish tint if that.
The S&P 500 scored its eighth consecutive "up" day, with a gain of just four points, or 0.09%. The Nasdaq Composite posted an incredible eleventh consecutive "green" day, up just 0.07% for the session, and had to get there without the Nasdaq 100. The non-financial, more tech-centric large-cap sibling of the Composite, closed down 0.14% on Monday, ending what had been a 10-day winning streak for that index. Small-caps gave up an early, comfortable-looking lead, and closed at the bottom of the day's range. The S&P 600 closed up a meager 0.02%.
Still, both of our major large-cap equity indexes did manage to extend their winning streaks and breadth really was not too bad at all. Winners beat losers by between 300 and 450 issues at both of New York's primary exchanges, while advancing volume took the lion's share of the aggregate for both NYSE-listed (62.8%) and Nasdaq-listed (71.7%) names. The one possible caveat there would be that aggregate trading volume did decrease overall. That said, we are comparing a Monday to a Friday, with data for October producer and consumer inflation to our immediate front, not to mention a bank holiday later in the week.

News broke Monday that Federal Reserve Governor Randal Quarles would step down from his position on the central bank's Board of Governors at year's end. There is nothing unusual about this move, Quarles had been the bank's inaugural vice-chair for bank supervision, but that leadership role for him had not been renewed when it expired last month. His term on the Board of Governors does not expire until 2032, but it is quite common for governors to resign after losing leadership roles regardless of length of term. His bank supervisory role is currently being administered by Lael Brainard and Michelle Bowman though neither has yet to be named a vice-chair.
This gets interesting, because there is currently an open slot among the supposedly seven-member board, and Federal Reserve Bank Vice-Chair Richard Clarida's term as governor expires at the end of January, meaning that President Biden will be able to shortly name three new governors, even if he renominates the Republican, but not very politically biased at all Jerome Powell as Fed Chair.
On that note, the president is known, or maybe I should say "perceived" to be interviewing both the current Chair as well as Lael Brainard for the top job. On the one hand, Powell has done nothing to lose the job, and the act of renominating a very non-political Republican could be seen as reaching across the aisle while costing the administration nothing. On the other hand, Powell really only ended up with the top job through the political brinkmanship of a prior president. Is that, unfortunately, how it's done now? If this administration copies the last, I would be afraid so.
Another driver for change, would be that should this president replace the Fed Chair for political purposes, it is very likely that Powell, much like Quarles, would resign from the Board of Governors once stripped of a leadership role, thus opening up a fourth slot among the potential seven seats. This would permit Democrats to dominate the central bank at least until the White House once again changes hands.

Speaking of The Fed...

Did anyone else see the semi-annual Financial Stability Report? No? Well, catch this line: "Given the size of China's economy and financial system as well as its extensive trade linkage with the rest of the world, financial stresses in China could strain global financial markets through a deterioration of risk sentiment, pose risks to global economic growth, and affect the United States." Hmm.
Here at home, the Fed warns that a "steep rise" in interest rates would lead to a "large" correction in risky assets, in addition to a reduction in demand for housing resulting in lower home prices. The Fed also warns that demand for labor could wane as borrowing costs for businesses increase.
Well, thank you, Captain Obvious. Pretty sure that the Franciscan monks I was educated by taught me this stuff in high school. Pretty sure, as well, that none of those monks were economists. Wanna take another crack at this and hand in your paper again next week?

The DF-21D is an anti-ship ballistic missile used by the Chinese military that travels at Mach 10 with an operational range of 1,100 miles. Satellite images taken in October by Maxar Technologies ( MAXR) , which is a U.S. satellite services provider with more than 80 vehicles currently in orbit serving both commercial and contracted government needs, showed full-size replicas of a U.S. carrier and two Arleigh Burke-class guided missile destroyers out at a testing site in the Taklamakan Desert. The ships are models of U.S. ships that serve in the Navy's Seventh (Pacific) Fleet in the waters around Taiwan.
Oh, did I mention the nickname given the DF-21D by U.S. defense forces? The DF-21D is known as the "carrier killer" and has been central to Beijing's military strategy on the regional level for at least a decade.
Wake up, D.C. If this particular missile had not convinced you that the aircraft carrier group is now obsolete as a means to extend U.S. foreign policy through the ability to enforce air superiority or land ground forces (Marines) almost anywhere on short notice, then the advent of hypersonic weapons certainly rings that bell with unwelcomed clarity. The Nimitz-class carriers operate with a population of 6,000 sailors and Marines, and carry a full load of 82 aircraft. What power? What risk. Either we, as a nation, catch up on the ability to play offense, or figure out how to play defense.
In the meantime, smaller, faster craft that can operate more independently might be a smart idea. Yes, Beijing meant for our satellites to pick up on what they are doing. This was a warning.

Cancel all price targets!
Advanced Micro Devices ( AMD) tacked on 10.14% on Monday, closing at $150.14. CEO Lisa Su hosted the firm's "Accelerated Data Center Premiere" as the week began and it was a doozy. First, Meta Platforms ( FB) , the old Facebook, became (incredibly) the tenth major hyperscale business to jump on the AMD EPYC CPU bandwagon to power it's data centers. EPYC processors rule! On that note, AMD unveiled details for the firm's next generation of EPYC processors, the "Genoa" and the "Bergamo." It also revealed the AMD Instinct MI200n series accelerators, which are more able to handle AI (artificial intelligence) workloads.
Meanwhile, while you rested that disgusting grape of yours on that 20-year old pillow (wash that thing, dude), Nvidia ( NVDA) CEO Jensen Huang touted the future of what the firm calls the "Omniverse" during his keynote address from the firm's GTC event. The Nvidia platform has been downloaded by 70K developers and 500 companies. It is currently available in Beta through four verticals that include Showroom, Farm, AR (Augmented Reality) and VR (Virtual Reality).
The charts currently look like this: 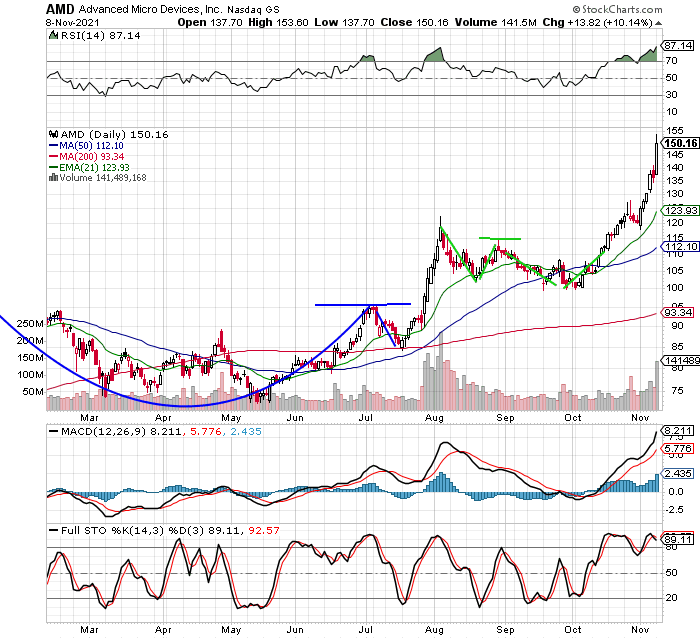 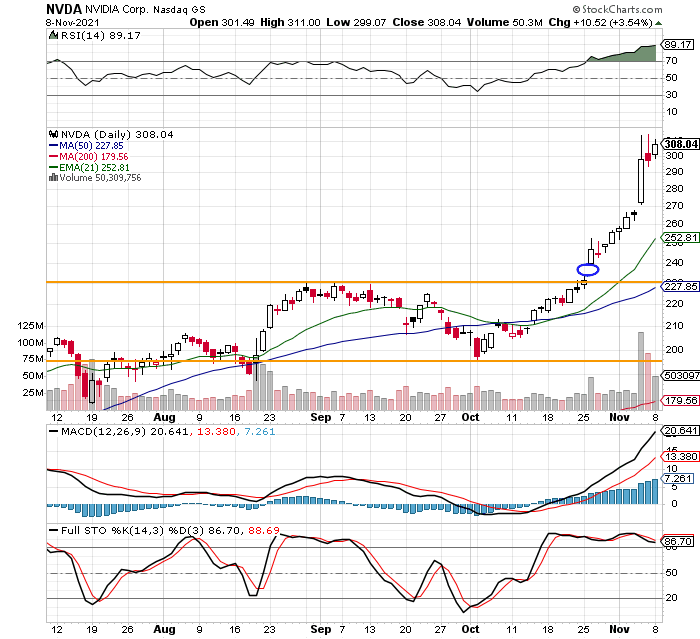 Until a few days ago, I had a $276 price target on Nvidia, and a $138 price target on AMD. I sold some NVDA on Thursday and again on Monday. I sold some AMD on Monday. Make no mistake, both names, along with Marvell Technology ( MRVL) , remain Sarge faves, as do their respective CEOs. Discipline is discipline, however, and some blood must be drawn once one is victorious. Hence, those sales.
Both names, at least technically, appear severely overbought. I will remain long both names, but must place my price targets for both under review. Just so you know what I am thinking, my revised price targets for these names are likely to be north of $175 for AMD and $350 for NVDA. While both names are fundamentally expensive at these levels, there is no denying that something special is going on, the mob is on to it, and no one has any idea how to price it in.
The most important thing we can do at this time is increase our "panic points." There is no excuse in the world for losing a great victory, such as what we have been gifted here, because we acted as "deer in the headlights.''
At this time, without officially setting new price targets, I am increasing my panic points for NVDA to $252 from $212, and for AMD to $124 from $108. In case you were going to ask, this is not rocket science. For both names, that is where the 21-day expoential moving average (EMA) went out on Monday night.