Market action leads us to believe we are now likely to see a pause in recent strength and some consolidation of gains.

With that said, investor sentiment (see below) remains extremely fearful with plenty of fuel to push the markets higher once our expectations of a pause/consolidation come to a conclusion.

Let's check out the latest charts and data. 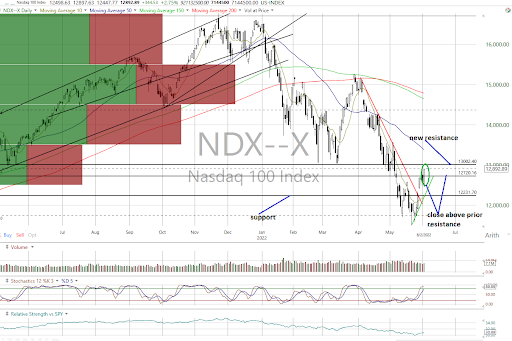 All the major equity indexes closed higher Thursday with positive internals but on lighter trading volumes.

All closed near their intraday highs with the Nasdaq 100 (see above) closing above resistance, turning its near-term trend to bullish from neutral as did the Russell 2000. As such, the S&P 500, Nasdaq 100 and Russell 2000 are positive with the rest neutral.

We would note, however, several of the index charts rose to resistance levels with high overhanging volume that imply more than one attempt at violation will likely be required in order to be achieved. They suggest a pause of strength.

Cumulative breadth remains positive on the All Exchange, NYSE and Nasdaq with the NYSE A/D closing above its 50-day moving average.

Stochastic levels are overbought but have not yet generated bearish crossover signals.

However, the detrended Rydex Ratio (contrarian indicator) remains very bullish at -3.9 as the ETF traders remain extremely leveraged short at a level seen only once in the past decade at the beginning of 2019. From that point the market rallied until March of 2020 when Covid-19 arrived on the scene. As such, the Rydex/Insider dynamic remains very encouraging.

The Investors Intelligence Bear/Bull Ratio (contrary indicator) also remains very bullish signal and near a decade peak of fear at 40.8/228.28. Only twice in the past decade has bearish sentiment been this extreme, both of which were coincident with market bottoms. Everyone is still on the bear side of the boat. We view that as very positive.

While the charts and market breadth have improved notably, the McClellan OB/OS combined with high volume resistance on the charts may likely result in some pause/consolidation of recent gains.

The report from New York is certainly consistent with what one would expect to see as an economy heads either into recession or more deeply into recession.