By STEPHEN GUILFOYLE Sep 06, 2022 | 07:07 AM EDT
Stocks quotes in this article: COUP, PATH, XLB, XLK, XLE, XLC, XLF, XLY, AAPL, META, GOOGL
Late night Monday. Very early Tuesday. Not sure what to call it. I'm at work, so I'm calling it Tuesday. Short week ahead, which will seem long.
Beware of the old Wall Street adage, "Short weeks are always long." Long because something always seems to come along that will make the trip from one weekend to the next difficult. Short because there is one day less this week in order to hunt. One less day to earn a living. Folks living off of either commission or their P/L (profit loss ratio) just don't seem to appreciate market holidays very much. These folks all know what they need to average per day in order to meet their bills and feed their families. Days off? No thank you. That only drives the average higher.
The marketplace, however, did need a three-day weekend. The S&P 500 managed to squeeze out a winning session last Thursday, even if it was by just a whisker. The Nasdaq Composite, Russell 2000, and Philadelphia Semiconductor Index. however, all come in Tuesday morning wearing six-day losing streaks.
The Nasdaq Composite has now posted back-to-back weeks where that index has given up at least 4%, led lower by sharp weakness in semiconductors. The Philadelphia Semiconductor Index has led equity markets to the downside, giving up an incredible 3.73%, 5.24%, and 7.12% for each of the past three weeks in succession. This index closed on Friday night, a whopping 15.81% below its August high. 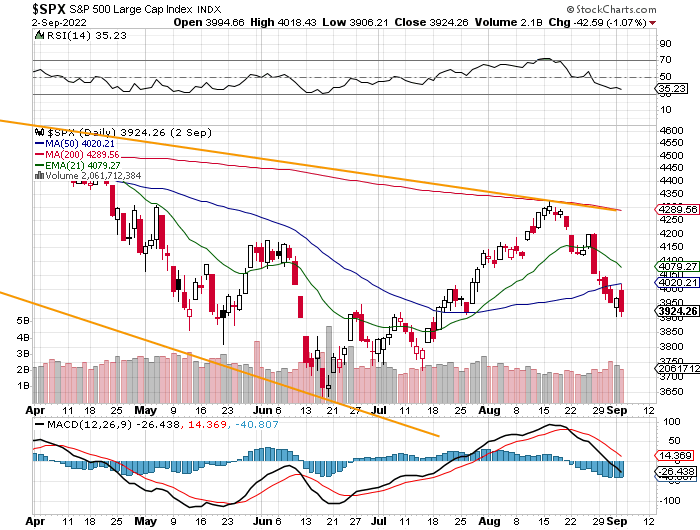 Interestingly, as readers can see above, the S&P 500, although it closed lower for the day on Friday, did manage to renew contact with its 50-day simple moving average that day after having lost contact for the prior two days. While it's a negative that the index met sharp resistance at this level, it is a positive that the index does not lose contact with this line. This could lead to an early week, tradeable, if not investable rally across U.S. equity markets. Just remember, all things are temporary.

That remains to be seen. All 11 S&P sector-select SPDR ETFs shaded red last week, as rising debt security yields start to present competition to equities for investor dollars. Nine of the 11 sector SPDRs gave up more than 2% last week, five of the 11 more than 3%.
Materials ( XLB) gave up 4.89% as U.S. dollar valuations surged, and Technology ( XLK) lost 5.03%, weighed down by the above-mentioned semiconductors, which will see sales to Chinese purchasers restricted by the U.S. government going forward.

Last week ended with the release of the twin BLS employment surveys for August. Coming in on Friday, we looked for the divergence between what had been the red hot Establishment Surveys of the prior four months and the ice cold Household Surveys over that same time frame to start working their way toward each other. That's indeed what we got, though I was somewhat surprised to see the Household Survey doing most of the work in bridging that gap.
For the month of August, the BLS Establishment Survey showed a Non-Farm Payrolls increase of 315K. The survey also revised past months lower by a net 107K, so, we end up with job creation of 208K. Interestingly, July's robust NFP print was only revised down 2K to 526K, so 105K of those 107K in revisions came from further back than that. The Household Survey showed 442K more employed persons in August than it did in July. The two BLS proxies for job creation are indeed starting to re-converge. We expected the Establishment Survey to cool, and it did, though just a bit. We expected the Household Survey to bring more heat. It brought a lot more.
The real news in this report was probably the surge in participation. The Participation Rate increased to 62.4% from 62.1% as 613K individuals joined the labor force and the number of unemployed persons increased 344K. This pushed the Unemployment Rate up to 3.7% from 3.5% and the Underemployment Rate up to 7% from 6.7%. Average hourly earnings increased 0.3% month over month and 5.2% year over year. Both were below expectations. The average work week decreased to 34.5 hours from 34.6 hours.
This report was both hot enough and cold enough in order to in no way impact the FOMC heading into the September 21 policy decision. Increased participation is one of the first signs of public distress and reduced hours is one of the first signs of decreasing demand for labor, That said, we are a long way from where the Fed wants to go.
While year-over-year wage growth of 5.2% remains light years behind July's headline year-over-year PCE growth of 6.3%, the 0.3% month-over-month wage growth, while falling short of consensus, beats the socks off of July's month-over-month PCE print of 0.1% growth.
I may think that we only need a 50 basis points hike in three weeks, but I am but one man. It's what the FOMC thinks that matters and right now, they are leaning toward erring on the side of recklessness.
At last glance, futures trading in Chicago are currently pricing in a 66% probability for a 75 basis points increase to be made to the fed funds rate target on September 21 and about a 58% likelihood for another hike of 50 bps on November 2. Keep in mind that the Fed also ramps up the liquidity vacuum (quantitative tightening program) this month.

On Friday, news broke that Russian gas giant Gazprom had shut down the delivery of natural gas to Germany via the Nord Stream 1 pipeline for "maintenance." We now know that this pipeline has been shuttered indefinitely, or until the collective West lifts its sanctions against Russia over Russia's invasion of Ukraine.
In addition, on Monday, OPEC+ met and decided, in what was a mild surprise, to recommend an aggregate production cut of 100K barrels of oil per day. OPEC+, as a group has had difficulty reaching target, so this action taken by itself is not all that meaningful. Should this be the first step of several, that would matter to energy markets significantly more.
Both U.S. oil and natural gas prices spiked in response to these events over the long holiday weekend. Both have started to return to orbit as we approach the opening of the U.S. regular session on Tuesday morning.

FactSet published their first "Earnings Insight'' in almost a month late last week. Turns out that for the second quarter, the net profit margin for the S&P 500, in aggregate, was 12.3%. The much-anticipated contraction in margin expected to show in the second quarter did not, at least not as broadly, nor as deeply as previously feared. This is well above the five-year S&P 500 average of 11.2%, but also well below the year-ago comp of 13.1%.
With the second-quarter reporting season in the books, we can now say, using FactSet's data, that 75% of S&P 500 companies beat on earnings, while 70% beat Wall Street expectations on revenue. S&P 500 earnings growth wound up at 6.3%, which was the slowest pace of growth since 2020, but still far better than the 3.9% projected at the close of the calendar period (June 30). For the third quarter, FactSet currently projects earnings growth of 3.8% and revenue growth of 8.8%.
Energy ( XLE) earnings, which led the S&P 500 at up 293% for the second quarter, are again expected to lead at +119.4%. Five sectors in all are expected to show growth, while six are at this time seen suffering year-over-year earnings contraction. Communication Services ( XLC) is expected to lead in the wrong direction at -12.7%, closely followed by the Financials ( XLF) , at -11.6%.
At this point, the S&P 500 will go into the first full week of September trading at 16.7 times forward-looking earnings. This is below both the five-year (18.6x) and 10-year (17.0x) averages for the index. Consumer Discretionary  ( XLY)  is currently the most highly valued sector at 25.3x, though still below the five-year average for the group (26.5x). Energy, despite the sector's recent out-performance, remains easily the least valued at just 8.5x. That, however, is well above Energy's five-year average of just 5.2x.

Highlight of the Week

The highlight of this shortened work week will have to be Wednesday's Apple ( AAPL) launch event.
Apple is expected to announce an iPhone 14 lineup of four models on September 7 (tomorrow) from corporate headquarters in Cupertino. Pricing will be watched closely by traders and investors as the most successful consumer electronics company in world history grapples with inflation in nearly every region of the planet. It is believed by some that prices will increase on the higher end, as sellers of other kinds of luxury goods have not yet experienced a sharp inflation-related downturn, while lower-end iPhone prices remain in line with last year's iPhone 13. There will be other products launched. Some expect to see an Apple Watch Series 8, or new AirPods. We'll see.
Even more interesting, and perhaps a better reason for owning AAPL shares was the story I saw that ran at the Financial Times over the weekend. the FT reported that Apple is possibly planning to almost double its workforce in the digital advertising space, now less than 18 months after introducing changes to its privacy rules that crippled the advertising businesses of several social media companies and significantly slowed those businesses for giants such as Meta Platforms ( META) and Alphabet ( GOOGL) . Apple's advertising business is growing rapidly, but still is quite tiny in comparison to those behemoths.
What does Apple have up its sleeve here? Don't really know. The company even disputes the story that it is looking to beef up its payroll in this particular slice of its overall business. It is, however, enough to keep me interested.