Good Morning! By now, many of you have noticed that this four-day work week is also the week that the financial and social elite gather for the World Economic Forum in Davos, Switzerland.

On tap will be all things inflation, global recessionary risk, climate change and war in Europe/global geopolitical realities as the fancy people will be sure to remind each other just how fancy they are. This will actually be the first year in three that the event is held in its usual January calendar spot due to the pandemic.

Though financial media, in general, will intentionally sensationalize the event, this also increases the headline risk around financial markets this week, as keyword-reading algorithms will of course be ready and eager to engage with almost anything said. The fact that U.S. markets are coming in hot and are short-term overbought only exacerbates the likelihood that these meetings produce some volatility.

Speaking of global economies, China's National Bureau of Statistics released a bevy of information on Monday. For the month of December, as China emerged from the shadow of that nation's Covid-zero policies (and the virus spread), Industrial Production continued to decelerate as Retail Sales continued to contract. Both, however, did beat expectations as China's unemployment rate dropped to 5.5% from 5.7%.

Perhaps more striking than those numbers were the data released for both GDP and population. China's economy, as measured by Beijing, grew 3% even for the full year 2022, falling well short of the government's official target of 5.5%. This was the second slowest pace of annual growth for China, only to 2020's 2.2% since the mid-1970s. Q4 GDP was flat from Q3 and up 2.9% year over year.

Markets managed to open and close five times last week, which is one more time than they had the two weeks prior, or will this week. It was a decisively positive week where longer-dated Treasuries rallied alongside equities, and as U.S. dollar valuations ground lower, which caused commodities to rally.

How about U.S. equity markets, though? The S&P 500 rallied on all five days individually last week as did all of your other major indexes. Most of those other major indexes, including the Nasdaq Composite, are even hotter, and now run with six-day winning streaks intact.

From a macroeconomic perspective, last week was dominated by the December CPI report, which is released by the Bureau of Labor Statistics. Those results showed up as a month-over-month contraction for headline inflation and for the most part, were in line with expectations. Highlighted were two items. One, that the U.S. is almost certainly past peak inflation, and two, that the input for shelter, which accounts for almost one-third of the index, is using stale data, is incorrect, and thus forcing current results to appear more inflationary than they actually are.

Away from the CPI, there were three key auctions of U.S. paper. The Treasury held auctions of 3-Year, 10-Year and 30-Year Notes that went exceedingly well, with increased foreign participation across the board.

There was also some Fed speak, and this time it was not all mindlessly hawkish drivel. There was rationale behind the words spoken by Boston Fed Pres. Susan Collins who suggested such outdated and long for,otten concepts as data-dependency. Collins was seconded by both Philadelphia Fed Pres. Patrick Harker and Richmond Fed Pres. Tom Barkin who both seemed to tilt toward a 25 basis point rate hike on February 1, and then at least letting themselves listen to the economy from there on out.

There really is no way to know how much damage is being done to the Main Street economy unless said economy is permitted to catch up to policy decided upon in D.C. This takes six to nine months.

Much of the economic talk of late has been around the possibility of a recession or not in 2022, with many seeing a soft landing or a shallow recession ahead. I'm here to tell you that recessions are contagious and once job losses and cost cutting become the corporate and small business norms and not the exception, there is almost no way to tell how deep a recession might get this far ahead of, or early in that recession.

Equity markets, while still looking somewhat range-bound, do appear to be in a place where there either has to be a breakout or a rejection.

While the Nasdaq Composite still has a ways to go in order to make a run at its 200-day simple moving average (SMA), the Russell 2000, Philadelphia Semiconductor Index and most importantly, the S&P 500, all crossed that bridge last week.

The S&P 500, as readers can see below, just barely crossed that line on Friday. 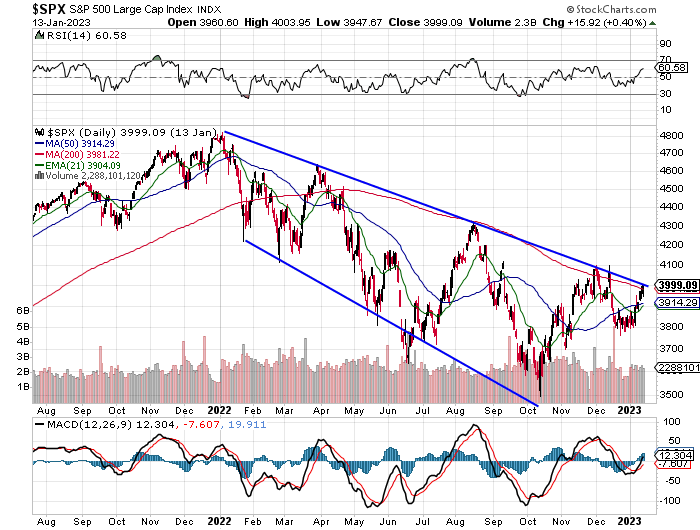 Readers will also see that the index now comes up against long-term resistance, which has held, as the upper blue line shows, for just about a year. This is where on this chart, the S&P 500, has failed repeatedly throughout the past year.

Nine of the 11 S&P sector-select SPDR ETFs shaded green for the week past, led by Consumer Discretionaries (XLY) , Technology (XLK) , the REITs (XLRE) and Materials (XLB) . All four of those sector SPDRs gained at least 4% over the period. Defensive sectors, excepting those REITs, lagged last week for the most part. Consumer Staples (XLP) gave up 1.37%.

According to FactSet, the S&P 500 now trades at 17.3 times forward-looking earnings, up from 16.5 times last week. This ratio remains significantly below the S&P 500's five-year average of 18.5 times, and has once again recaptured its 10-year average (17.2).

Fourth-quarter S&P 500 earnings are now expected to land -3.9% from the year-ago period on revenue growth of 3.9%. Earnings are also seen in contraction on a year-over-year basis for Q1 and Q2 2023.

The Atlanta Fed's GDPNow model, which is a real-time snapshot of data already reported and not a tool of prediction, currently has Q4 2022 running at growth of 4.1% q/q SAAR, though to me, the data feel worse than that.

Concerning the FOMC policy decision scheduled for February 1, Fed Funds futures trading in Chicago are currently pricing in a 92% probability for a 25 basis point increase at that time. Futures show that this hike will be followed by an 80% likelihood for another 25 basis points on March 22 that gets the Fed to 4.75% to 5%, which would be the terminal rate. Futures also show a 79% chance for a rate cut by December.

Just a friendly reminder for readers who might run their own businesses or freelance, today (Tuesday, Jan 17) is your deadline to get your estimated quarterly payments into the IRS and your state tax collector. I know you don't need to be reminded, but sometimes these things sneak up on me, so I thought I would pass it on.

Fed speakers will, of course, be out in force this week. I have 10 speeches on the radar right now over the next four days. A couple of these appearances almost always seem to get past me, so there are likely more than 10 headed your way. The headliner this week will be Vice Chair Lael Brainard who is set to speak early Thursday afternoon. Then there will also be the release of the Fed's Beige Book on Wednesday afternoon.

As far as the macro goes, there will be quite a bit to look at in a short period of time. Tuesday brings us both December Retail Sales and December Industrial Production. December Housing Starts will hit the tape on Thursday, while December Existing Home Sales will print this Friday.

Concerning surveys, look for the Empire State (NY) Manufacturing Index on Tuesday and the Philly Fed on Thursday. These regional manufacturing based surveys have run into problems of late. The U.S. Treasury will also bring $12B worth of 20-year paper to market on Wednesday.

Not really sure what to expect this week. I am surprised that the banks rallied late Friday and that they carried the entire market with them after so many consecutive "up" days. Can the S&P 500 hold that 200-day line? I have my doubts. I'd love to be wrong.

Remember, the more that these talking heads talk in Davos, the more that high-speed algorithms impacting our marketplace will act. If that talk is upbeat or all about inflation and recessionary risk, the result will be splashed across our tape.

We are still two weeks away from the February 1 FOMC policy meeting. The blackout period leading into that meeting starts this Saturday (January 21), which is why I think more Fed speakers than I am currently tracking will slide into public appearances this week. Even if the FOMC raises by 25 basis points once or twice and then pauses, we are a long way from reducing rates. Quantitative tightening is still at work, and even when the FOMC does pause, monetary conditions will continue to tighten.

CEO speak will be as important as earnings season unfolds as anything the Fed Heads say this week or anything that spills out of the clown car in Davos. How cautious will they sound? How nervous will they appear? Are inventories being well managed? Where does that take guidance? Where will that take valuation? You would think not higher. Though higher is where valuation has gone of late.