While only one of the major equity indexes managed to post a gain Tuesday, no violations of support or trend were registered, leaving all but one in near-term bullish trends as are the cumulative advance/decline lines regarding market breadth.

Still, we have been of the opinion that, given the sizable gains for the month, some pause or consolidation of these gains would not be unusual.

Given the status of the McClellan OB/OS Oscillators, the S&P 500's valuation spread and overbought stochastic levels, we continue to exercise some patience as they suggest better buying opportunities may likely be in the offering over the near term. 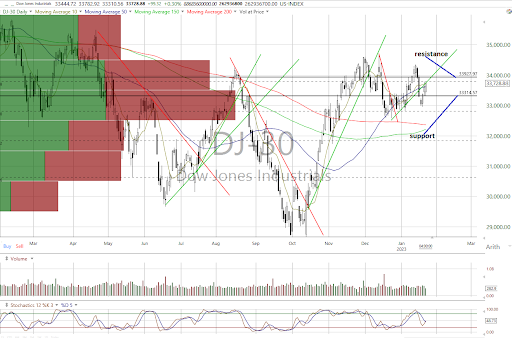 On the charts, only the DJIA (see above) managed to close in the green Tuesday as the rest posted losses.

Market internals were mostly negative on lighter trading volume. Yet the weakness had no impact on the current near-term trends that remain bullish on all but the DJIA, which is neutral.

No support levels were violated.

Cumulative market breadth remains strong on the All Exchange, NYSE and Nasdaq with all in uptrends and above their 50-day moving averages.

However, while no bearish crossovers have been generated thus far, all the stochastic levels are overbought and present a potential issue.

Regarding the data dashboard, it is mostly neutral. However, the 1-day McClellan Overbought/Oversold Oscillators remain overbought and, in our view, continue to imply some near-term headwind, particularly when the size of recent gains is taken into account (All Exchange: +65.97 NYSE: +78.92 Nasdaq: +57.11).

The percentage of S&P 500 issues trading above their 50-day moving averages (contrarian indicator) is unchanged at 67% and is on a neutral signal.

The Open Insider Buy/Sell Ratio dipped slightly to 29.4 and is neutral as well.

The detrended Rydex Ratio (contrarian indicator) rose to -0.46 and is also neutral. Its prior bullish signals no longer exist.

This week's AAII Bear/Bull Ratio (contrarian indicator) dropped to 1.52 as bearish sentiment declined and has dipped to bullish versus its prior very bullish signal. 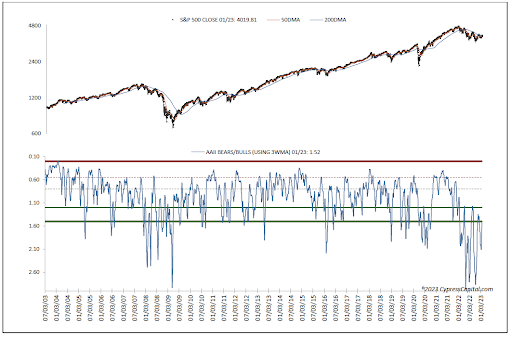 The Investors Intelligence Bear/Bull Ratio (contrary indicator) is neutral at 29.6/46.5 as bears declined and bulls rose.

While our longer and intermediate-term outlook remains constructive, the McClellan OB/OS, S&P 500 valuation spread and stochastic levels are suggesting the potential for some further digestion of the January gains, to some degree. Thus, we remain patient for better buying opportunities to appear.

Does the Fed feel compelled to overreact to the current economic landscape, and thus compound past mistakes made?

The most important issue will be whether there are any dovish hints about what is to come.