By STEPHEN GUILFOYLE Feb 08, 2022 | 07:42 AM EST
Stocks quotes in this article: BP, CNC, DD, PFE, SYY, CMG, LYFT, PTON, XLI, XLE, XLC, XLK, GOOGL, FB, NFLX, TSLA, MSFT, NUE, CLF, RTX, NVDA
Looking to my left, I am very short, and very heavy. Looking to my right, I am very tall, and very thin. Looking back? No, don't go there. Forward... wait. What the?
It's become another recent trend. All things are not as they appear. For the third trading session in a row, as well it seems for the majority of 2022 trading sessions, equities broadly move with roughly 35 or 40 minutes until the closing bell, sharply in one direction or the other. On Monday, as it had been on Friday and Thursday, that sudden burst of algorithmic energy took markets lower. In fact, taking an overview of Monday, stocks rallied, then sold off, then rallied again, and then sold off again, only to close on an uptick.
There certainly is no fear currently being expressed across our marketplace, regardless of the FOMC's likely trajectory for policy coming off of a January employment report perceived as strong and going into what may be a red-hot January CPI print on Wednesday. Earnings have also been undeniably better than expected. Many companies have raised prior or introduced positive forward-looking guidance.
The VIX took Monday off, and has continued to sag overnight. All of our CBOE options put/call ratios are trending toward monthly lows. The yield for the U.S. 10-Year Note (auction tomorrow afternoon) has moved sharply higher:

That said, the yield spread between the U.S. 2-Year Note and that 10-Year does not frighten...

...as this spread, which had certainly flattened significantly in January, has moved quietly sideways since, even as the above yield has spiked in early February. It's almost as if bond traders are pausing ahead of making a decision on whether to signal rising rates on rising growth, or signal rising rates that will slow economic activity. It's as if these traders understand that despite a more complex monetary (and fiscal) backdrop, there could be a burst of velocity in transaction regardless of supply-side conditions, should the SARS-CoV-2 coronavirus really back off this time.

This time, however, there was at least a spark that ticked off keyword-reading, high-speed, heat-seeking algorithmic selling. On Monday afternoon, President Biden and German Chancellor Scholz met while, almost simultaneously, French President Macron met with Russian President Putin. (Macron meets with Ukrainian President Zelensky this -- Tuesday -- afternoon).
The Biden-Scholz meeting ended with a press conference intended to present the perception of a united front (at least to the media) should Russia invade Ukraine. While the two leaders did sound as if they were ready to respond militarily should an invasion occur, and markets certainly did take a negative cue from those comments, the two leaders did appear to struggle otherwise. President Biden said "There will be no longer a Nord Stream 2. We will bring an end to it. I promise you, we will be able to do that." Scholz clearly tried to avoid affirming what the president said on this topic.
Nord Stream 2, just a quick FYI, is a system of offshore natural gas pipelines running under the Baltic Sea from Russia to Germany. The system was completed in 2021, but is not yet operational. Obviously, when it comes to markets for natural gas, the U.S. does indeed have a dog in that fight, and just as obvious should Russian troops enter Ukraine, Russia would have to rely upon the sale of fossil fuels to drive revenue.
Needless to say, Defense and Aerospace stocks outperformed not only the Industrials sector-select SPDR ETF ( ( XLI) ), but the equity market at large on Monday.

For a marketplace that displayed strikingly different personalities throughout the session, the results had more in common with Melba toast than they did the financial wilderness of the past two weeks. As far as broad large-cap indexes are concerned, the S&P 500 gave up 0.37%, while the Nasdaq Composite surrendered 0.58%. Large-cap indexes with a more narrow focus performed in line -- the Dow Transports lost 0.14%, while the Dow Utilities gained 0.11%, and the Nasdaq 100 retreated 0.64%.
U.S. markets were led by smaller-cap stocks for a change, as the Russell 2000 gained 0.51% on Monday. However, the almost similar S&P 600 closed nearly unchanged at +0.09%. The S&P MidCap 400 stayed even closer to home, -0.01%. That's as close I think to "unchanged" as an index can get in the algorithmic/electronic/decimalized era of execution within which we now live. I can almost guarantee that if stocks were still priced by a bunch of A-type kids from the outer boroughs of New York City, and if stocks still traded in Spanish pieces of eight that we would have seen a few "unches" on Monday.
Five of the 11 SPDR sector ETFs closed in the green on Monday, led by (say it with me) Energy ( ( XLE) ), which was the only sector ETF (+1.28%) to rise more than 0.3% for the session. "Growthy types" took the bottom two slots on the sector performance tables. Communication Services ( ( XLC) ) finished in dead last (-1.74%) again, dragged lower by the Dow Jones U.S. Internet Index, which traded off 2.89%. The Technology sector SPDR ETF ( ( XLK) ) closed down 0.66%, as software broadly underperformed the semiconductors.
Oddly, breadth was far more positive than was index performance. Winners beat losers at the NYSE by a rough 6 to 5, and at the Nasdaq by more than 9 to 7, despite appearances. Advancing volume took 57.8% of both Nasdaq and NYSE aggregate trading volumes. Now, here's where it gets tricky. Trading volume decreased on Monday from Friday for NYSE-listed and S&P 500 constituent names. Therefore, we can, as usual, place a lower value on the day's activity. However, aggregate trading volume for Nasdaq-listed names increased 4.3% from Friday, and 4.1% for Nasdaq Composite constituent names. Does that equal a display of professional distribution? Both the Nasdaq Composite and Nasdaq 100 were from an indexed point of view the day's downside leaders -- but, breadth across that marketplace was undeniably painted with a brush of positivity.
I think that we do not call this professional distribution, at least not broadly. What this was, I think, was centralized selling pressure across a few highly influential names. Alphabet ( GOOGL) gave up 2.86%, Meta Platforms ( FB) took another beating (-5.14%) as that stock failed to hold a key technical level (61.8% Fibonacci retracement of March 2020 through September 2021 rally) that many traders had eyed for support. There's more... Netflix ( NFLX) , Tesla ( TSLA) and Microsoft ( MSFT) lost 1.97%, 1.73%, and 1.63%, respectively, on Monday.

The Biden administration appears to have reached an agreement with Japan, where the U.S. will suspend its Trump-era 25% tariff on steel imports from the Asian nation up to 1.25M tons per year effective April 1. A 10% levy on aluminum will remain in place. The nations have also agreed to cooperate on taking on overcapacity in steel markets due to dumping or subsidies provided in non-market economies (wonder who that is?), as well as on carbon emission intensity across the industrial metals production sector.
The agreement is similar in nature to the one struck last October between the U.S. and the European Union. That deal also made provisions to address carbon emissions and overcapacity driven by "dumping." I am, for now, staying out of Nucor ( NUE) and Cleveland-Cliffs ( CLF) , which I think are the best two U.S. stories in this space.

As mentioned above, most defense contractors traded higher on Monday and most are up overnight as well. There is an exception, though, and it's unfortunately a Sarge fave. Raytheon Technologies ( RTX) , which has been in rally mode since reporting back on Jan. 25, made the news last night. Bloomberg reported that three senior executives in the firm's missile division, including the division CFO, have left the company. There is no hard news as to the cause for the exits.
That said, we do know that the firm is facing a Department of Justice probe into cost reporting issues involving defense contracts at the missile division going back years. Fans of the stock might recall that on that Jan. 25 conference call, Raytheon had stated that it had made progress on its own investigation into this matter, and that it was setting aside a reserve of $290M in anticipation of some liability for damages. The important level to hold for the shares will be $92.50, which had been resistance and has served as pivot on the recent breakout attempt.

We all knew it ahead of time. Well, maybe not. One might have thought this news priced in. That said, the shares are trading lower overnight.
It is now official, the sale of Arm Holdings by Softbank to Nvidia ( NVDA) collapsed under the weight of regulators in the U.S., U.K. and EU. The deal, which would have been the largest ever in the semiconductor industry, ranged in value from the time of the announcement at $38.5B in September of 2020 to as much as $87B when Nvidia's share price peaked in November 2021.
Nvidia is not completely off the hook, and will have to pay Softbank a break-up fee of $1.25B. Softbank, which could have used the funds provided through this sale, will now have to go the IPO route and try to unload Arm Holdings to the investing public by year's end as there is no other potential suitor both willing to pay "the price" and able to survive the scrutiny of global regulators. Rene Haas will succeed Simon Segars as chief executive at Arm. 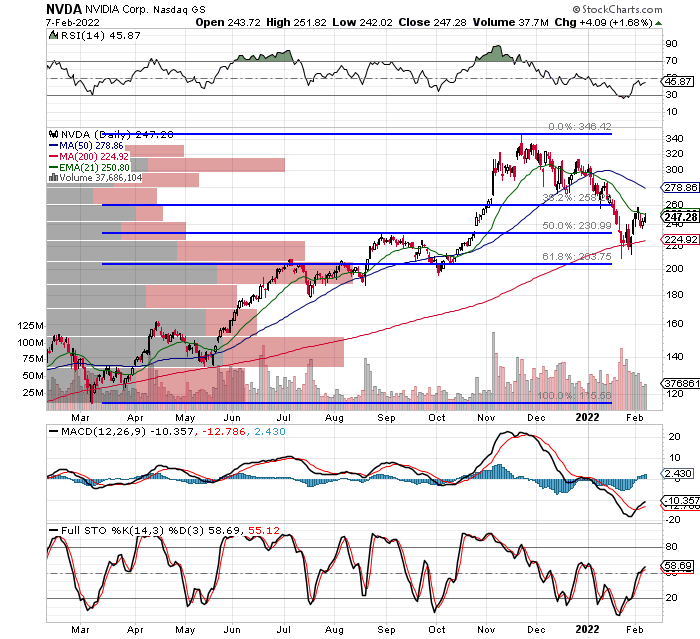 Readers will see NVDA rebounded nicely off of an almost precise 61.8% Fibonacci retracement of the March through November rally, where support created a volume shelf that likely is still there. Hopefully (I am long NVDA), we will never find out. While recent resistance has been met at the stock's 21-day exponential moving average (EMA), I would think that this will not be an issue this morning.
I think (pure opinion) that not going through the digestion of the British chip giant might actually keep Nvidia on track and at the top of its game as the elite operation on the cutting edge of AI, the data center, the meta (omni) verse, machine learning, gaming, and automotive technologies. I had actually worried a bit that Arm was going to take Jensen Huang's eye off of the ball. That worry can now be put to bed.
I will not be concerned about the share price unless the stock makes another run at the 200-day line ($225).


(Nvidia, Nucor, Microsoft, Alphabet and Chipotle are holdings in the Action Alerts PLUS member club. Want to be alerted before AAP buys or sells these stocks? Learn more now.)

Respect the Trends and Buy Weakness

Our song remains the same.