All the index charts remain in near-term downtrends as negative market breadth persists. However, some of the data remains encouraging and at or near levels associated with market correction lows.

Let's take a close look at the latest charts and data. 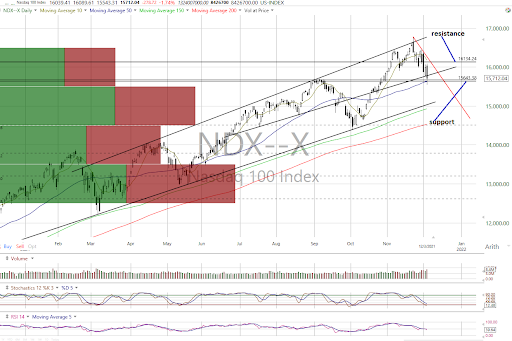 While some of the drops were notable, we would stress that all support levels on the indexes held. No violations occurred.

Nonetheless, all the indexes remain in near-term downtrends with only the Nasdaq 100 (see above) remaining above its 50-day moving average.

Cumulative market breadth continued to sag, leaving the All Exchange, NYSE and Nasdaq A/Ds negative and below their 50-day moving averages.

On the stochastic side of the picture, the Dow Jones Transports flashed a bullish crossover while the rest remain quite oversold.

Looking at the data, the McClellan 1-Day Overbought/Oversold Oscillators for the All Exchange and Nasdaq dropped back to very oversold levels with the NYSE just shy of that condition (All Exchange: -105.39 NYSE: -97.97 Nasdaq: -109.08). In fact, the Nasdaq's three-week OB/OS moving average is now at March 2020 levels. They still suggest potential for further strength, in our opinion.

The percentage of S&P 500 issues trading above their 50-day moving averages dipped to 40% and remains neutral.

The Open Insider Buy/Sell Ratio dipped as well to 69.3. However, the past several sessions have seen a generally consistent increase in insider buying activity as we have noted previously.

The detrended Rydex Ratio (contrarian indicator), measuring the action of the leveraged ETF traders, moved up fractionally to 1.09. It remains cautionary.

While Friday's painful session suggests we were early in our more optimistic outlook of "neutral/positive" for the markets, chart support levels held while the data remain encouraging. However, we are now of the opinion that the charts and market cumulative breadth need to improve before becoming more optimistic.