With markets down in early trading Wednesday, the near-term consolidation of the sizable March gains that we had been expecting appears not to have been completed just yet.

Despite the damage done in Tuesday's action, the major equity indexes are still in near-term neutral trends.

Meanwhile, the McClellan 1-day OB/OS Oscillators that were on warning signals Tuesday have retreated to neutral levels as is the balance of the data inputs, except for contrarian crowd sentiment that still registers very high levels of fear present.

All the major equity indexes closed lower Tuesday with negative internals on the NYSE and Nasdaq on higher trading volumes.

All closed at or near their intraday lows with the DJIA, Dow Jones Transports, MidCap 400, Russell 2000 and Value Line Arithmetic Index closing below their respective support levels. However, the near-term trends, in our opinion, remain neutral as the consolidations of the March gains progressed.

Unfortunately, market breadth weakened with the cumulative advance/decline lines for the All Exchange and NYSE slipping to neutral as they joined the Nasdaq in that regard.

There were no stochastic signals generated. We would note, however, the Dow Transports, which has been hammered over the past few sessions, is now very oversold but not yet yielding a bullish crossover signal. 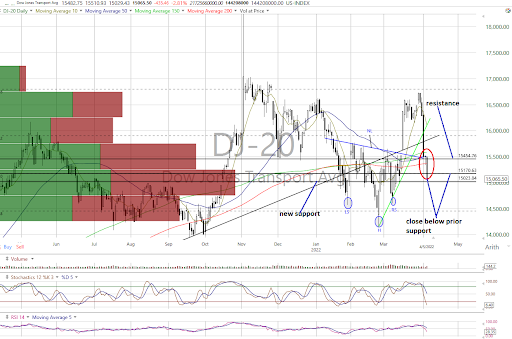 The detrended Rydex Ratio (contrarian indicator) lifted to +0.48 and remains neutral versus its prior bullish implications near the March lows.

The forward 12-month consensus earnings estimate from Bloomberg for the S&P 500 increased further to $234.28 per share. As such, the S&P's forward P/E multiple stands at 19.3x with the "rule of 20" finding ballpark fair value at 17.4x.

The expected consolidation of March's gains appears to be ongoing and lacking signals, other than extreme crowd bearish sentiment. We continue to look for implications that this consolidation period has been completed, but that is not currently the case.