Two steps forward, one step back?

While we maintain our near-term macro-outlook for equities at "neutral/positive," the market's charts, data and valuation suggest some further consolidation of the recent rally gains is more likely before further progress may be seen. 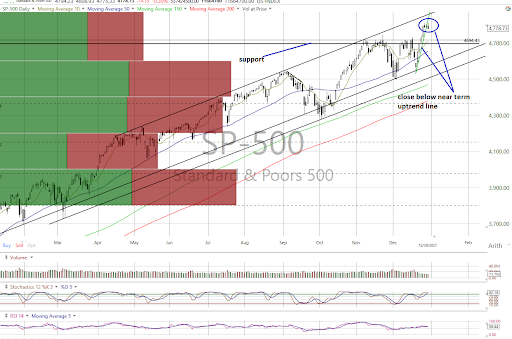 The indexes closed mostly lower Thursday, but internals were positive on the NYSE and Nasdaq as trading volumes rose from the prior session.

Despite the positive internals, however, the S&P 500 (see above), DJIA and Russell 2000 closed below their near-term uptrend lines and are now neutral versus their previous bullish implications.

So, we now find the Nasdaq Composite, Nasdaq 100 and Midcap 400 positive with the rest neutral.

Cumulative market breadth remains neutral on the Nasdaq and All Exchange with the NYSE's still positive.

The stochastic levels remain overbought but have yet to generate bearish crossover signals.

The McClellan 1-Day Overbought/Oversold Oscillators remain neutral on the All Exchange and Nasdaq while the NYSE's remains overbought (All Exchange: +45.34 NYSE: +65.33 Nasdaq: +31.57).

The percentage of S&P 500 issues trading above their 50-day moving averages dipped to 68% and remains neutral but near the upper end of its range for the year.

Meanwhile, the detrended Rydex Ratio (contrarian indicator), measuring the action of the leveraged ETF traders, rose to 1.32 and remains bearish. In our view, this shift in the Insider/Rydex dynamic may be worth noting.

This week's contrarian AAII Bear/Bull Ratio dipped to 1.23 but remains bullish as the crowd remains nervous and unwilling to embrace recent market strength. However, the Investors Intelligence Bear/Bull Ratio (24.4/55.0) (contrary indicator) did a total flip flop from the prior week as bulls now outweigh bears yet remains neutral.

The S&P's forward earnings yield is 4.52%. We would note the forward estimates for the S&P may rise next week as has been the case throughout the past year as a new forward quarter is added.

We remain "neutral/positive" in our near-term macro-outlook for equities while the charts, data and valuation suggest some further consolidation of recent gains may be more likely.

It definitely is starting to feel like some of the beaten-down groups are starting to bottom.

Regardless how the Fed tea leaves fall today, the recent spike in volatility is likely to be with us for a while.

An Inside Day almost always signals a period of reduced volatility, which is something that I think most of us are ready for.