While all the major equity indexes closed at or near their intraday highs Thursday with some improvements on the mid-and small-cap charts, most of the large-cap indexes rallied to their near-term resistance levels and downtrend lines that, in our opinion, may prove problematic.

Meanwhile, market breadth did improve while the data is sending a generally neutral message. Normally, this setup would suggest a shift in our near-term outlook for equities to "neutral". However, as we see forward earnings estimates for the S&P 500 and multiple individual companies receding of late while the 10-Year Treasury yield has moved above what we believed to be resistance, we remain of the opinion there is a reasonable possibility of the recent rally failing near current levels. 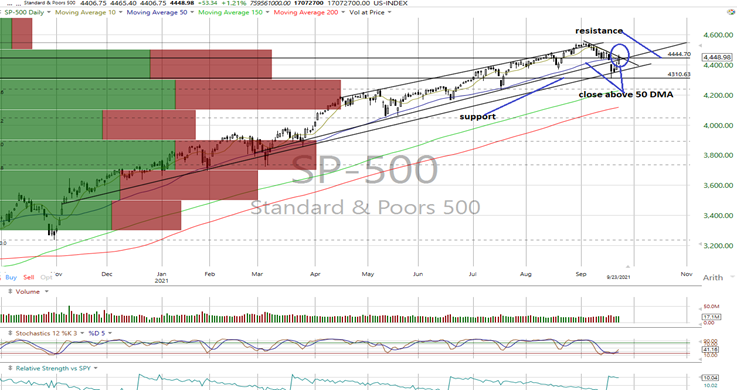 All the major equity indexes closed higher Thursday with positive internals on the NYSE and Nasdaq on slightly lighter volume. All closed at or near their intraday highs.

However, most of the large-cap indexes, including S&P 500 (see above), Nasdaq Composite, Nasdaq 100 and DJIA, closed at resistance and their near-term downtrend lines. As we have speculated recently, we believed there was potential for the indexes to rally to these levels that could prove to be points of obstruction with potential for failure.

What's more, the (SPY) and (QQQ) are also at high-volume resistance levels.

Market breadth saw some improvement with the cumulative advance/decline lines turning neutral from negative for the All Exchange, NYSE and Nasdaq.

The Rydex Ratio (contrarian indicator), measuring the action of the leveraged ETF traders, dipped to 1.0 and remains mildly bearish as the ETF traders have eased up on their leveraged long exposure to some degree.

The Open Insider Buy/Sell Ratio remains at 76.2 as insiders saw the recent decline as a buying opportunity and remains neutral.

The forward 12-month consensus earnings estimate for the S&P 500 from Bloomberg dipped slightly to $206.81 per share. As such, the S&P's forward P/E multiple is 21.5x with the "rule of 20" finding fair value at approximately 18.6x.

The recent rally has pushed the large-cap indexes to important resistance levels as we have watched forward earnings estimates decline lately for the S&P and individual names. We remain cautious.

The stock continues to hold and rally, and option premiums are relatively light.

Geodrill drills for gold and minerals, while Vicinity Motor has EV busses.