The magnitude and swiftness of the market decline over the last seven days cannot be explained simply by the stickiness of inflation, by the war in Ukraine, by supply-chain dislocations, by the vicious cycle of declining stock prices/poor hedge fund performance/redemptions/liquidations or by the challenges facing central bankers around the world, because all these headwinds have been visible for months.

I have searched and searched for other reasons for the timing of the precipitous and almost warp speed drop, and I believe I have isolated an important contributor to the decline that few have focused on.

But before I do, a little rock-and-roll from "The Prince of Soul."

Father, father
We don't need to escalate
You see, war is not the answer
For only love can conquer hate
You know we've got to find a way
To bring some lovin' here today" 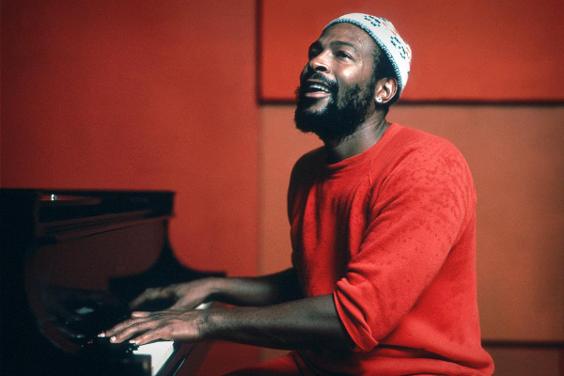 As I wrote earlier, it is hard for me and others to explain away the size and swiftness of the market's drop (see the chart below) to already known factors (see the comments above), so I have searched for a better explanation. 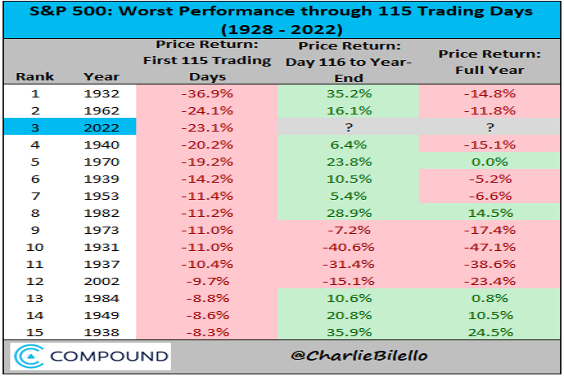 I got to thinking about the unusual confluence of the suddenness of the decline in both bonds and stocks -- a subject I discussed in a recent Bloomberg interview. In that mid-May interview, I observed that the decline in the 60/40 strategy (60% stocks/40% bonds) was the third worst in the last century.

With the spike in yields (and much lower bond prices) coupled with a drop in stock prices since then, the 60/40 strategy returns have deteriorated much further, producing unprecedented losses (and, at -17.3%, the second largest drawdown in history.) 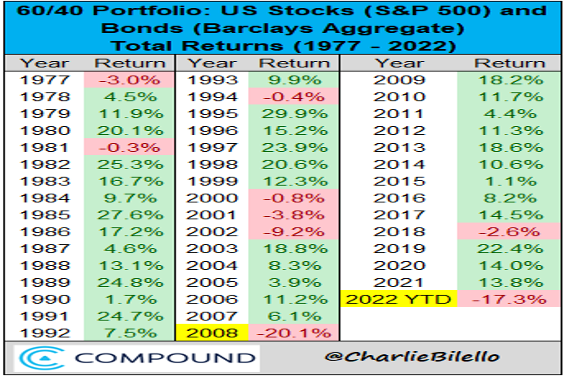 This drawdown of both stocks and bonds simultaneously is important as it got me thinking about the disastrous 2022 returns of risk parity (and other quant strategies and products).

I won't get too far into the weeds, but risk parity is a very popular and highly leveraged strategy that uses risk to determine allocation of capital. By diversifying among assets, the goal of risk parity investing is to optimize returns with less (and more targeted) risk.

And here is a simple explanation of conventional portfolio allocation compared to a risk parity portfolio from smartasset.com:

"Investors often default to the 60/40 method of asset allocation, with 60% of the portfolio in stocks and 40% in bonds. It's a convenient investment method that is fairly simple to rebalance when market conditions change. The downside can come with performance. Long term, 60/40 portfolios generally do not perform as well as those more concentrated in stocks. Risk parity attempts a more advanced method of portfolio management. The investor must first decide what level of risk exposure they can tolerate. Then, instead of opting for a default high/low-risk allocation, the manager balances assets to achieve the target risk across the entire portfolio. Typically they will buy more low-risk and less high-risk assets, to create an even, overall risk exposure.

Investors often use some MPT methodology to design risk parity portfolios, but there is a an important difference between these approaches. MPT creates a portfolio mix based on the potential for both risk and return. In contrast, at the outset the risk parity approach focuses solely on risk distribution. Naturally, the investor's desired return is a factor in any portfolio management. But the theory holds that dispersed risk should lead to better performance. In particular, risk parity should create a buffer between the portfolio and bear markets. The portfolio should keep steady when equities drop in value because the risk does not concentrate in the equity class. By contrast, a conventional portfolio's risk may pile up to 90% of its risk into equities. So when the market drops, so does the portfolio's performance."

I have warned of the general risks associated with levered quant strategies (such as risk parity) in numerous columns, affectionately titled "Kill The Quants Before They Kill Our Markets."

As expected, what went wrong for the models over the last week is that both stock and bond prices -- expected in risk parity models to behave inversely (-1) -- were correlated (+1) and both dropped dramatically, causing an unwind of the highly leveraged risk parity trade that has become the or one of the most popular strategies in the quant world over the last decade.

As the pace of the drop in both equities and fixed income intensified, so did the pace of selling in risk parity strategies and other quantitative products, feeding upon itself.

I have not yet heard one person in the business media highlight risk parity/quant strategies as a contributing factor to the warp speed drop in equity prices.

It is important to remember that this sort of computer-generated selling is unemotional. and brutal and has produced an unrelenting and remarkably swift avalanche of systemic selling.

I conclude that it is quite possible that risk parity and other quant selling have importantly abetted an overshoot to the downside in stock prices.

For these and other reasons I remain a buyer of stocks.

(This commentary is excerpted and originally appeared on Real Money Pro on June 17. Click here to learn about this dynamic market information service for active traders and to receive Doug Kass's Daily Diary and columns from Paul Price, Bret Jensen and others.)

Get an email alert each time I write an article for Real Money. Click the "+Follow" next to my byline to this article.
TAGS: Short-selling | Bonds | Investing | Markets | Stocks | Trading | Asset Manager | U.S. Equity