The softness experienced Tuesday had no impact on support levels or near-term uptrends as all held the line.

However, the data still find the McClellan 1-day OB/OS Oscillators overbought, but less so, while investor fear has dissipated to being generally neutral versus their peak levels of fear near the market lows.

As such, the overall picture, in our opinion, is the markets are likely to take a pause and consolidate from their recent notable gains within a positive trend for the near term.

All closed near their intraday lows but left all the support levels and uptrends intact.

Cumulative market breadth remains positive for the All Exchange, NYSE and Nasdaq with all above their 50-day moving averages.

The McClellan Overbought/Oversold Oscillators are still in overbought territory despite Tuesday's weakness but less so (All Exchange: +69.32 NYSE: +92.57 Nasdaq: +51.92). They remain at somewhat cautionary levels.

We would highlight the detrended Rydex Ratio (contrarian indicator), which dropped to -0.60 and is now neutral versus its prior bullish implications, as the typically wrong leveraged ETF traders have notably reduced their leveraged short exposure over the past two weeks.

The detrended Rydex Ratio is -0.60 (neutral) 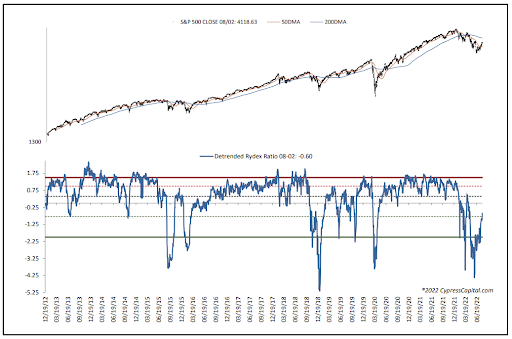 However, the Investors Intelligence Bear/Bull Ratio (contrary indicator) moderated and stayed neutral with the number of bears dropping and bulls increasing at 33.3/38.9.

The 10-Year Treasury yield closed lower at 2.74%. We view support as 2.49% and resistance at 2.78% with the caveat that it may have formed a "head & shoulders" topping pattern regarding yield.

Tuesday's weakness had little to no technical impact regarding the improving environment for equites, according to our interpretation of the charts. However, the OB/OS overbought conditions combined with the bullish fuel coming from investor sentiment dissipating suggest the likelihood of some near-term pause and consolidation of gains before further progress is initiated.