With stocks rebounding a bit Tuesday morning, after Monday's declines, it is fair to ask if the recent correction is over.

Here's what charts and data are telling us.

With one exception, all the major indexes closed lower Monday. All but the Dow Jones Transports, which was the only gainer, closed at or near their intraday lows as selling pressure persisted into the close. Some support levels were violated as some near-term trends also turned negative with 50-day moving averages broken as well.

And while the charts weakened, the 1-day McClellan OBOS Oscillators are only mildly oversold with the rest of the data neutral aside from the investor sentiment readings showing a decent amount of fear remains in the mix.

As such, the correction we thought  likely after the March rally continued with a lack of evidence that would be strong enough to suggest, with a high degree of probability, it has been completed. 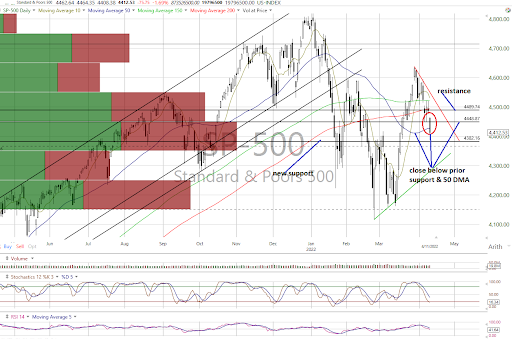 All the major equity indexes, except for the Dow Jones Transports, closed lower Monday with negative breadth and up/down volume on the NYSE and Nasdaq.

Several negative technical events were registered as the S&P 500 (see above), Nasdaq Composite, Nasdaq 100 and Russell 2000 closed below support as the DJIA and Value Line Arithmetic Index joined them in closing below their 50-day moving averages.

The damage was sufficient to leave all in near-term downtrends except for the DJIA and Value Line indexes, which stayed neutral.

While the larger-cap indexes may be forming "inverted head & shoulder" patterns that would prove beneficial, we believe it is too early to have confidence in their validity at this point.

Meanwhile, market breadth remains negative for the cumulative advance/decline lines on the All Exchange, NYSE and Nasdaq.

Some stochastic readings are now quite oversold but have yet to generate actionable bullish crossover signals.

The McClellan 1-Day Overbought/Oversold Oscillators are only mildly oversold despite the recent weakness (All Exchange: -52.94 NYSE: -50.51 Nasdaq: -53.45).

The percentage of S&P 500 issues trading above their 50-day moving averages (contrarian indicator) is 51%, remaining neutral.

The detrended Rydex Ratio (contrarian indicator) dipped to +0.02, also staying neutral versus its prior bullish implications near the March lows.

The forward 12-month consensus earnings estimate from Bloomberg for the S&P 500 lifted to $235.03 per share. As such, the S&P's forward P/E multiple stands at 18.8x with the "rule of 20" finding ballpark fair value declining to 17.2x.

The 10-Year Treasury yield closed higher at 2.78% and above resistance. While we view new resistance as 2.88%, it is far enough back on the charts that it may not be very effective. Support is raised to 2.41%.

The consolidation of the March rally continued with still no signs generated at this stage to suggest it has been completed.