Where do we stand in this volatile market right now?

Two of the major equity indexes violated their support levels Tuesday as near-term downtrends for all the indexes remain intact and lacking signs of reversal.

While the charts remain negative, the data are generally neutral except for investor sentiment (contrarian indicators; see below) that continue to reveal historically high levels of fear that, over the past two decades, have been associated with market bottoms followed by rallies.

Nonetheless, while medium-to long-term investors may find prices attractive, we have yet to see enough of a shift in the evidence to suggest the recent market slide has been completed and offering short-term tradable strength. 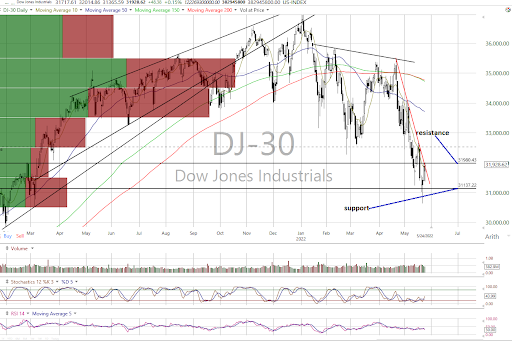 Of the major equity indexes, only the DJIA (see above) managed to post a gain Tuesday as the rest declined, leaving all in near-term downtrends that have yet to show technical signs of an upside reversal.

And while the near-term downtrends should, in our opinion, be respected until suggesting otherwise, the cumulative breadth for the Nasdaq saw its A/D line turn negative from neutral with the All Exchange and NYSE staying neutral.

A Look at the Latest Market Data

The percentage of S&P 500 issues trading above their 50-day moving averages (contrarian indicator) rose to 21% but remains bullish.

The Open Insider Buy/Sell Ratio slipped to 92.6 as insiders recently backed off from their prior buying activity.

In sharp contrast, the detrended Rydex Ratio (contrarian indicator) remains very bullish at -2.97 as the leveraged ETF traders are leveraged short at historically high levels. Its chart shows only five times in the past decade have the ETF traders been so heavily leveraged short, all of which were followed by rallies. As such, the Rydex/Insider dynamic remains encouraging.

The Investors Intelligence Bear/Bull Ratio (contrary indicator) also remains very bullish signal and at a decade peak of fear at 43.0/27.8. Only twice in the past decade has bearish sentiment been this extreme, both of which were coincident with market bottoms. 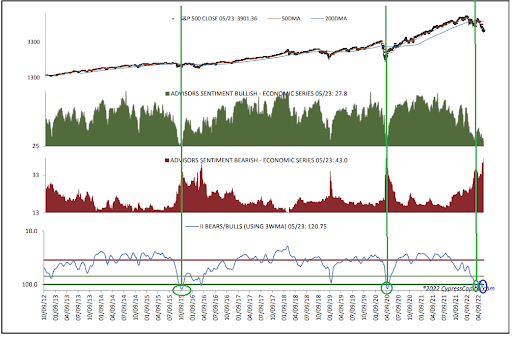 The forward 12-month consensus earnings estimate from Bloomberg for the SPX lifted to $234.83. As such, the SPX forward multiple remains at 16.8 and at a discount to the "rule of 20" finding ballpark fair value at 17.2. Said discount has not been seen in the markets for several months.

The SPX forward earnings yield is 5.96%.

The near-term outlook has yet to show signs of shifting out of its current downtrends. However, sentiment and valuation suggest some buying opportunities for those with medium-to-longer investment time horizons.